In her role as program administrator for Beyond The Wire, Jessica Ryley Hammond routinely meets Thoroughbreds transitioning to new lives after racing. She’s passionate about the job and the cause. 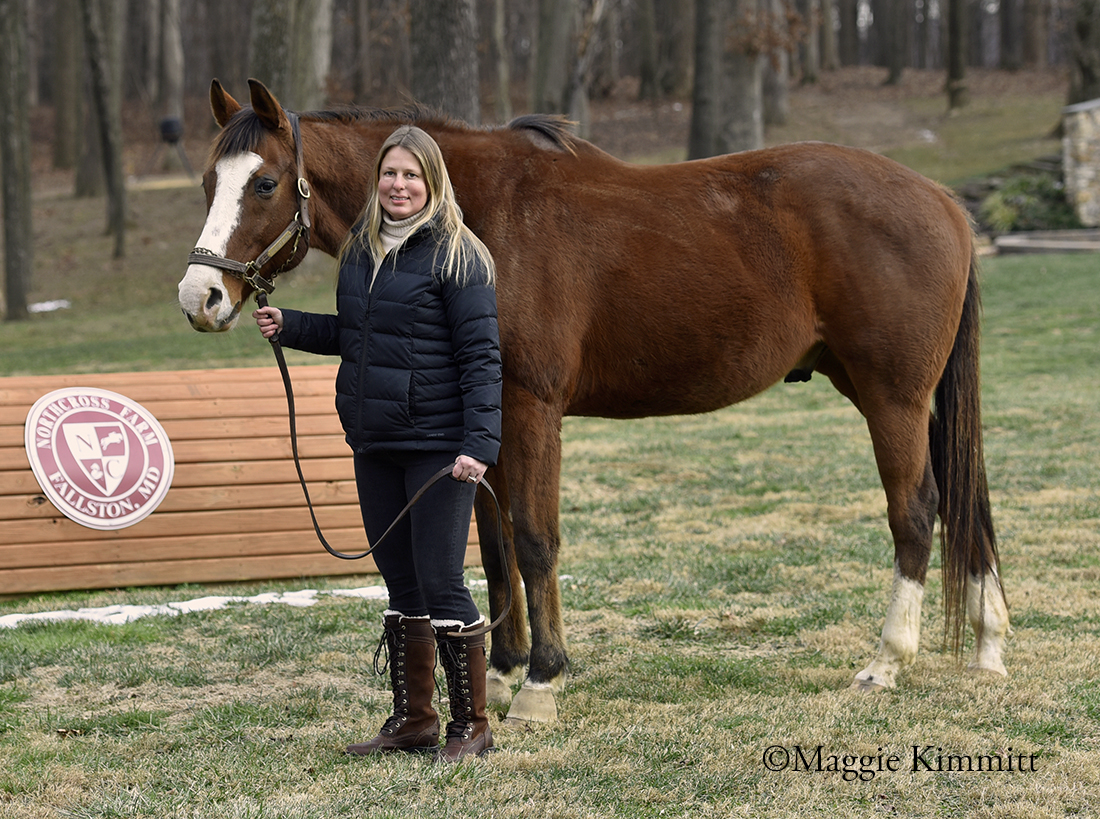 After nearly four years of working to introduce retiring racehorses to second careers with new owners, Hammond shopped for herself in early 2021. The horse she took on trial proved less than ideal. A gem to ride, he was difficult on the ground. She sent the horse to a professional, who advised her to continue her search for a suitable mount. Jessica’s husband, former trainer Scott Hammond, echoed the opinion.

Back to the drawing board last June, Jessica saw an advertisement on Facebook from the Foxie G Foundation for 14-year-old gelding Peace Fire. She reached out to organization founder Laurie Calhoun, explained the situation and said the horse sounded like what she was hoping to find.

“I read the description and I thought, ‘I need to look at this horse.’ He sounded like he had been there and done that. He ran on the flat, in steeplechase races, foxhunted,” Hammond said. “She said she would hold on to him until I could go see him. I actually went out there on my birthday – June 14, 2021. It was really funny because she had him in the wash stall, and she said, ‘Come on in.’ So I walked in, and the first thing he did was bite me. Not hard, just a nip. But I was like, ‘Great . . . this is off to a good start.’ ”

Out in the ring, Scott hopped on and tried the horse first, which is the Hammonds’ usual practice. Jessica suffers from a muscular disease, so Scott usually does the test drive and determines if the horse is level-headed and reliable enough for his wife. After just a few minutes, he gave Jessica the green light.

“I got on him and started walking around. And it’s kind of cheesy to say, but I felt like I was at home as soon as I sat on him. I just immediately felt like I had known him forever. I was like, ‘Wow, this is my bud. This is my partner right here.’ ”

When you know, you know. Within a week, Peace Fire got on a van and headed to the Hammonds’ farm in Fallston, Md.

Jessica performed her due diligence before seeing the horse for the first time. She studied his statistics and followed the trail that led him to Foxie G, making phone calls to former connections. In all cases, reports were glowing.

Bred by Briggs/Cromartie, Peace Fire was foaled in Florida May 9, 2007 – a son of the Bobby Frankel-trained multiple graded stakes winner Peace Rules and the then 23-year-old mare Miss Evans. Bloodstock afficionados would enjoy sinking teeth into his meaty page. Among the top line are Mr. Prospector, Devil’s Bag, Halo, Raise a Native, Tom Rolfe. And through his dam – royalty. Miss Evans was a daughter of European champion Nijinsky II and the multiple stakes winner Targa. By Cannonade, Targa won the 1982 Santa Maria Handicap-G2 and earned $334,271.

Peace Fire was purchased by Vinery for $90,000 at the 2008 Keeneland September yearling sale. He won his debut at 2 for trainer Graham Motion in 2009, but lost four in a row before being sold to trainer Jack Fisher as a steeplechase prospect in 2010. Peace Fire made three flat starts for Fisher, including a second at Saratoga, before moving to hurdles that fall.

Racing for Ann and Henry Stern, Peace Fire finished second in his hurdle debut in a 3-year-old maiden at Middleburg Oct. 3, 2010. The winner, Demonstrative, became a champion and earned $940,300 over jumps.

Peace Fire couldn’t match Demonstrative, but was consistent. He finished second twice more in 2010, both stakes, and placed five times in 2011. On the shelf for 2012, he emerged as a timber horse in 2013 and won at Winterthur. His ownership shifted back to Fisher and eventually to Mike Hankin’s Northwoods Stable, but Peace Fire remained in Fisher’s barn and finished second in his final start at Shawan Downs in September 2015. His record read 25-2-9-5 with $83,535 earned.

“Peace Fire ended up fracturing his tibial crest and that stopped his racing career,” Jessica said. “The Hankins kept him for several years as an extra foxhunter. Then he moved on to Charlie Fenwick, who didn’t have him for long before placing him with Foxie G. He had only been there for a week when I went out to see him.”

In truth, Jessica’s search for a horse was rather reluctant. Any candidate she considered had what felt like an impossible act to follow: Zabarajad (Ire).

“We bought him in Ireland as a racehorse and brought him over. When he retired, I never thought he would become my horse because he was so cantankerous. We had a slow-moving partnership because he could be so difficult, but it ended up being fantastic and rewarding, and we just got along so well. I rode him for around five years.”

Zabarajad developed a nagging issue that proved to be an advanced stage of degenerative joint disease, forcing his permanent retirement to the Hammonds’ farm.

“I felt like I had been punched in the stomach,” Jessica said. “I cried on and off for days. Scott said, ‘He’s not dead,’ and I said, ‘I know, but I had all these hopes and plans.’ We were doing so well, and I had wanted to continue on. I wondered if I would ever feel the same way about another horse. We just got each other, and I was worried I would not have that kind of bond again. But I already have that with Peace Fire.”

She soon learned that the flashy bay had a devoted group of friends and fans. Most are connections he met during his career. Several reached out to Jessica on social media, sharing stories and photos and requesting to be kept in the loop with his new adventures.

“We just hit the ground running as soon as he got here,” Jessica said. Trail riding with friends is a favorite activity, with frequent trips to Fair Hill and nearby Gunpowder State Park. During a visit to Codorus State Park in Pennsylvania last summer, Jessica enjoyed something she’d never done before – swimming with her horse. “Really swimming,” she said, “up to his chest and not touching the ground. My mother said, ‘How do you know he’ll swim?’ I said, ‘Because I’m gonna ask him to.’ And that’s just what he’s like. I could tell we trusted each other very early on.”