“He/she doesn’t owe us anything.”

It’s an oft-repeated declaration among owners of retired Thoroughbreds. A stallion who became the cornerstone of a successful breeding farm. A blue-hen mare whose offspring consistently overachieved. A trusted family foxhunter; a gifted show jumper; an event horse who steadily climbed the ranks to the sport’s loftiest level. Or, as in the case of Side by Side, a 30-year-old non-winner of a race whose owner has never sat on his back. 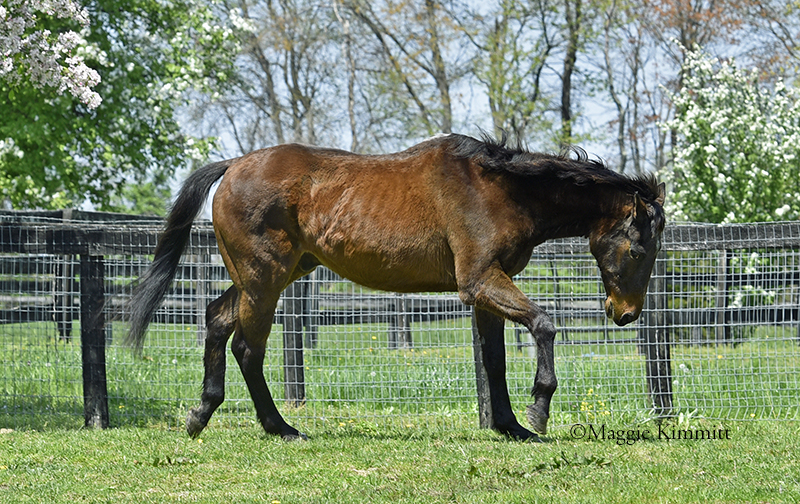 There are gaps in his story – spaces that can’t be filled in – but none of that matters at all to owner Stephanie Hurley. She and husband Tim board the bay gelding they re-christened “Maverick” at Happy Appy Acres, a small private farmette halfway between Fair Hill Training Center and downtown Elkton, Md.

As off-track Thoroughbred owners frequently do, Stephanie modestly says her horse “doesn’t really have much of a story.” And, as owners just as frequently are, she was mistaken.

The story of Side by Side began in California on April 15, 1992. Bred by Mrs. Jack White, he was part of the White Oak Ranch consignment at the California Thoroughbred Sales summer invitational yearling sale at Del Mar in 1993. He was purchased for $2,700 by Edgar Earl.

Two years later, Side by Side made his first start at Garden State Park on March 3, 1995 in a maiden special weight for trainer Kate Demasi and owner John Michaels; he finished last in a nine-horse field. Back in a $12,500 maiden claimer three weeks later, he was again last, this time in a field of seven. Third time’s the charm? Not in this case. Demasi dropped him in for a $7,500 tag on April 15. He beat one horse, finishing seventh. And that was game, set and match – Side by Side’s racing career was over. Three starts, 0-0-0 and $204 earned.

Stephanie relayed what she knows about what happened next.

“He was purchased by a woman in Pennsylvania for a jumper program. I’m not sure of the date. And he was a great jumper, but he had anxiety issues.” What she does know is that Jen Carr purchased Side by Side in 2006 and began retraining him.
“She leased him to a rider for Pony Club,” Stephanie said. “In 2009 he went to the Pony Club Nationals in Kentucky, where he finished fourth.”
Back in Maryland afterward, the horse was turned out for a break and suffered a career-ending injury, damaging several vertebrae in his neck.
“He’s never been ridden since,” she added.
Side by Side appeared on the Hurleys’ radar screen when he was boarded at Fair Hill Stables, which closed in 2019. Located across Route 273 from the Thoroughbred training center, the riding stable offered miles of trails on the state-owned natural resources management area for pleasure riders.

Stephanie kept horses there for years, including New Jersey-bred Matt Handel – whom she called Billy. By Cormorant out of the *Slady Castle mare Tiara Rose, he too retired a maiden with no placings and $600 earned in two starts.

Stephanie fell in love with the gelding when he was used for public trail rides by Fair Hill Stables; she purchased him in 2010 when he was 23 and vision-impaired.

“He was a great horse. He was quirky and a lot of people didn’t like him, but he and I clicked. I rode him, even with his sight problems. He would listen to my voice.”

In 2013, Stephanie and Tim decided to take on another of Fair Hill Stables’ senior residents, and Side by Side, then 21, joined the family.

“Billy was blind in one eye and losing sight in the other. Maverick [Side by Side] became Billy’s guide horse. He wore a cowbell so Billy could always hear where he was.”

The pair became inseparable, and Stephanie and Tim were devoted to both. That neither horse could be ridden anymore was insignificant. The Hurleys were committed to daily care and quality of life.

“Their grace, power and personality as older Thoroughbreds were not diminished in retirement,” Stephanie said. “Their sensitivity toward each other and me motivated me and my desire to provide them all the help they needed in their golden years.”

Billy lived another three years, passing away in 2016 at age 29. Side by Side was quickly joined by new pasture mate Breeze, then 30, a Quarter Horse owned by the Hurleys’ friend Julia Reilly. He and Breeze had been turned out together before Side by Side was pressed into service as Billy’s companion.

Side by Side suffered an injury to his own vision in the spring 2019.

“He had another field accident and ended up needing an enucleation [removal] of his left eye,” Stephanie said. “In the fall of 2019, Fair Hill Stables closed and he and Breeze moved to Jo Ann Bashore’s Happy Appy Acres.”

The relocation went smoothly, and the two old gents adjusted to life in their new environment with Stephanie, Tim and Julia visiting and fussing over them daily.

Last November, 34-year-old Breeze suffered a severe bout of colic and was euthanized. Side by Side had outlived another of his buddies.

With Gabe standing impatiently at the gate to the paddock the two geldings share, the Hurleys bathed Side by Side and spruced him up for his photo shoot.

“We’ll have to take the pictures from his good side,” Stephanie laughed.

In truth, you barely notice he’s missing an eye. There’s no sway to his back. His coat is healthy, with just one small Velveteen Rabbit-ish hairless stripe on the crest of his withers. Only the subtle “hitch in his git-along” belied his advanced years when he was turned loose back in his paddock with Gabe and the two commenced spinning and bucking.

Stephanie still includes her treasured Billy when speaking about Side by Side.

“They returned my love for them by becoming 1,200-pound pet dogs that would just follow me through the barn as I did my chores or came trotting through the pasture when they heard my car pull up for treats and feed time,” she said. “They both loved weekend baths that would always result in kicking up their heels and rolling in the dirt, followed by a nicker at me for all my work on that bath. Those things brought a tear to my eye and such joy to my heart and soul. How could you not feel their love and mutual respect?”