Where’s Bob has an air about him. Even before owner Dana Weaver begins to fill in the blanks about her 29-year-old gelding’s history, it’s easy to get a sense that this horse’s story would be a book not easily put down. Still dignified and elegant, it’s easy to conjure a vision of Bob’s human alter ego. He’s the octogenarian in vintage Brooks Brothers sipping 1968 Glendronach out of a Waterford rocks glass while chatting about his relatives’ sailing excursion with those lovely people on the Mayflower. 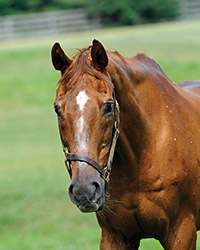 It would be hard to fault him for boasting a bit. Bred by Allaire duPont, Where’s Bob was foaled at her Woodstock Farm in Chesapeake City, Md., on May 9, 1983. His sire was a local guy?–?Grade 1 stakes winner Akureyri, who stood just down the road at Windfields Farm, then home of Northern Dancer. Akureyri came from good people himself, sired by Buckpasser out of the North-ern Dancer mare Royal Statute. Where’s Bob’s dam, Mari Her, was a daughter of Maribeau (*Ribot—Cosmah, by Cosmic Bomb), a half-brother to both Halo and Tosmah. Out of duPont’s homebred Hem and Haw (Double Jay), Mari Her was a half-sister to stakes winners American History (Tom Rolfe) and Delaware Chief (Chieftain). And Dela-ware Chief, Bob would wink as he pointed out, was co-owned by Ol’ Blue Eyes himself, Frank Sinatra.

Bob’s siblings weren’t exactly slouches either. Shiner, by Two Punch, was the dam of Shiny Band (Dixieland Band) and Shine Again (Wild Again). Stakes winner Shiny Band banked $391,384. A multiple Grade 1 winner of $1,271,840, Shine Again was the Maryland-bred Horse of the Year of 2003.

DuPont was renowned for her habit of naming her horses after friends and special people in her life, and Where’s Bob was no exception.

“He was named for one of the Woodstock farm employees,” Weaver told. “He’s still alive?–?Bob Morris. He was the farm [property] manager for 40 years. Bob was always busy, off doing something, so Allaire would always be asking ‘Where’s Bob?’ That was the big joke.”

Sent to the barn of Allen Jerkens, Where’s Bob wore the storied gray and yellow silks of duPont’s Bohemia Stable made famous by five-time Horse of the Year Kelso. Scoring at first asking, he was win, place or show in his first seven career starts, including a third in his first stakes appearance at Laurel Park on Oct. 18, 1986, on the inaugural Maryland Million card. Ridden that day by Jean Luc Samyn, Where’s Bob finished third behind Northern Dancer’s offspring Glow and Air Dancer in the Maryland Million Turf for 3-year-olds. If he’s not the oldest Maryland Million runner still living, Where’s Bob would be one of a very small handful linked to that inaugural event.

Where’s Bob spent two seasons in Jerkens’ barn before a bowed tendon sent him back home at the end of 1987. DuPont then sent him to her son-in-law, the late Dr. William Wright III, for rehabilitation. Rested for a year and a half, Where’s Bob returned to the races in May 1989 with Wright as his trainer, but after three dismal efforts he returned to the farm for good. In 20 lifetime outings, his record was 4-4-3 with $82,310 earned.

And that’s where Dana Weaver came in. Weaver and her fiancé, Vernon Metcalfe, met Wright through a mutual connection and struck up a friendship. After dinner at Weaver’s Oxford, Pa., farm one evening, Wright made a decision.

“Bob needs to come live with you guys,” the veterinarian told Weaver.

A rider since childhood, the North East, Md., native had a few pleasure horses at home. Wright decided that the tidy, well-appointed barn with ample turnout was the perfect situation for the 16.2-hand chestnut, then 7. Weaver agreed, and Where’s Bob has been with her for 22 years.

Weaver’s idea was to turn Bob into a pleasure and perhaps show horse.

“Doc thought she could make him into a nice jumper,” Metcalfe said. Bob’s idea bore no resemblance whatsoever to Weaver’s plan. “She rode him a little bit,” Metcalfe went on, “but he’d just plant his feet and say ‘I don’t like this.’ ”

No matter. Bob happily settled into the good life with the Appaloosa and Quarter Horse cross that Weaver had for many years. Outliving them both, he’s been the only horse on the property since.

“My last horse died in 2001. He’s a little bossy, but he loves his mule friends at the Amish farm next door,” Weaver said. Remarkably healthy and robust, Bob’s a big solid guy with substantial bone. His only obvious concession to his age are the white “birdcatcher” spots that cover his bright red coat.

“His favorite place to stand in the field is up there by the road,” Metcalfe said. “Amish buggies go by all the time. He watches everything, and there’s a nice breeze. Snowstorms, he’ll be out in it. But one little fly, and he comes back down to his fan or he’ll come over and want you to remove it for him. But he gets plenty of attention. Everyone’s a friend.”

Turns out that one of his friends is a very old friend. Bonnie Baynes, who galloped Where’s Bob for Wright, lives a mile down the road and drives by every day with a beep of her horn and a “Hi Bob!” for her old mount. Weaver and Metcalfe are still in touch with Allaire duPont’s daughter, Lana duPont Wright, as well as Bob Morris.

“Where’s Bob is just living the good life now,” said Weaver. “He never went too far from home, came back to his birthplace, and everyone is still connected because of him.”

Metcalfe jumped in, needing to add a post-script. “Oh she spoils him,” he said in mock aggravation. “Listen to this. I had to go to the emergency room last December; I thought I was dying. And she said ‘Well let me take care of the horse first. . .’?”