His Jockey Club name comes from sire Iron and dam Miss List, but whoever christened Ironfist, now 29, could not have been more prophetic. Bred by Gordie Keys’ Oatland Farm, he was foaled in Maryland May 5, 1993, and aimed straight for a steeplechase career. 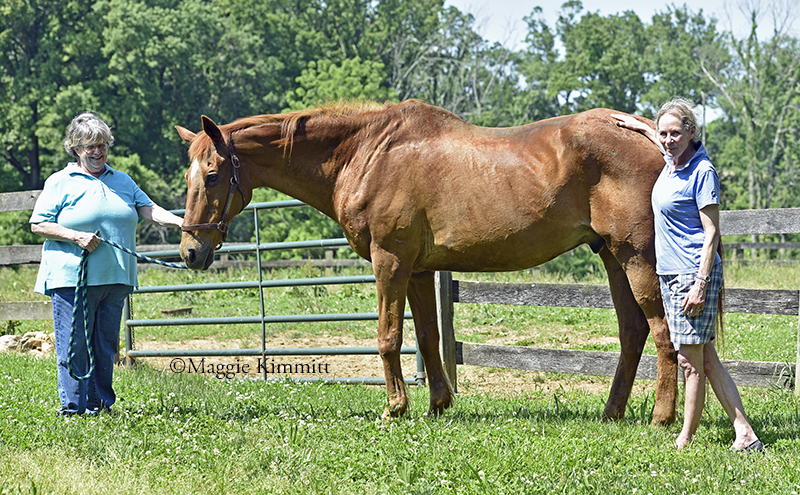 For Keys’ daughter Chrissy and her husband Bay Cockburn, Ironfist made four point-to-point starts over hurdles in 1997. Switched to timber the next year, the chestnut won two of three – again strictly on the point-to-point circuit. Aboard Ironfist for a win in the 4-mile Eustis Cup at the Loudoun Hunt Point-to-Point in mid-April, Cockburn was paralyzed in a fall two weeks later and Ironfist went on the market as a timber prospect.

Dorian and Harry Filbert, riding high on the success of their 1998 Maryland Hunt Cup winner Florida Law (co-owned by Francis Knott), looked to add to their stable with Tom Voss. Florida Law set a high bar, with that Hunt Cup win and placings in four prior editions. A few weeks after that 1998 Hunt Cup, the Filberts attended the Black-Eyed Susan Stakes at Pimlico Race Course and bumped into fellow Voss clients Warren and Karen Dempsey.

“We told Warren we were looking for another timber prospect,” Dorian said. “He said there was a horse in Virginia that had beaten their horse just recently, and his regular rider and trainer, Bay Cockburn, had just had a terrible accident.”

Dorian knew Keys from foxhunting, made a phone call and confirmed the horse’s availability. Ironfist came for a trial with Voss, which Dorian remembered as a complete disaster.

She told Voss, “Well, I guess we’ll send him back to Virginia.”

“Why the hell would you do that?” Voss replied, as only he could.
The future Hall of Famer was known for seeing things others didn’t. And that day, he saw something. Ironfist ran four times in 1999 – seconds at Marlborough Point-to-Point and in his first National Steeplechase Association starts at My Lady’s Manor and the Virginia Gold Cup, and a season-ending sixth at Radnor.

Everything changed the following spring as Ironfist won four times – capped by stakes victories in the My Lady’s Manor, Mason Houghland Memorial and New Jersey Hunt Cup – en route to the NSA timber championship and champion Maryland-bred steeplechaser honors. In 2001, Ironfist backed up that campaign with another perfect run, going 3-for-3 with a second Manor, the Virginia Gold Cup and a win at the Colonial Cup to help Voss sew up a second consecutive NSA training title. Ironfist made it eight in a row when he won the Manor, again, in 2002. The streak ended with a second in the Virginia Gold Cup, and Ironfist made what turned out to be his final start when he lost jockey Roger Horgan in October’s International Gold Cup.

“Ironfist had a huge bearing on my career,” he said. “It was such an honor to get the call on him the first time [in 2000],” he said. “I was still an amateur, so I was able to ride him in the My Lady’s Manor. And it was an impossible task, because [runner-up] Saluter was a monster. We somehow pulled it off. I have never sat on a horse that has a will to win like Ironfist had. He was just spectacular.”

Longtime Voss employee M.J. Kirwan handled many of the trainer’s top runners, including Eclipse champion Slip Away. Ironfist remains her favorite. Before racing, he was laid back almost to the point of disinterest. He’d walk calmly and pause frequently to take in the activity. During a pre-race interview one Saturday, someone asked Kirwan what Ironfist was thinking.

“I said he was thinking about how he was going to go out there and kick some butt,” she said. “He loved racing. It was the thing that gave him confidence. It brought him out of his shell.”

Horgan, who moved from jump racing to a long career on the racetrack as an exercise rider and assistant trainer, credited Voss, Kirwan and the atmosphere at the farm for combining to make a timber star.

“When Ironfist first came to Tom, he was a big-framed horse, but there wasn’t a lot to him,” Horgan said. “And he was very nervous. But I think between the environment at Atlanta Hall Farm and the amazing care from M.J., he just found a niche where he was happy. And he absolutely blossomed.”

Horgan called the 2002 Manor, where Ironfist became the historic race’s third three-time winner, as a favorite moment – just for the road that got them there.

Out for hack with Voss before Christmas 2001, Ironfist was injured when a cornstalk pierced a spot just behind the knee. The ordeal included a nasty infection, two surgeries and an extended stay at New Bolton Center. Returning from Florida in late February, Horgan was concerned.

“I remember walking in and seeing him and going, ‘We’re in a bit of trouble here,’ ” he said. “He wasn’t himself.”

He was by April and put together another front-running display to edge Maipo by a head.

Ironfist’s anticipated second career as a family foxhunter was less than stellar. In short, he despised it.

“He was terrible,” Dorian said. “Wouldn’t stand still, jigged the whole time, rooted. He was a real pain to hunt.”

Horgan understands. At the beginning of each season, Voss would have him ride Ironfist “out hunting for about an hour” to get him ready.

“It was the worst hour of my year, every year,” Horgan said. “I hated it. He hated it. It was torture. He wouldn’t stand for two seconds; he had no patience with it. He was saying ‘This nonsense with the dogs running around, I don’t want any part of it.’ ” Nearly 20 years after Ironfist’s retirement, all is forgiven. He’s the VIP at the Filberts’ Golden Quarters Farm, where Dorian carries on feeding him Fuji apples Harry Filbert religiously gave him.

“Only Fuji, because they’re the sweetest,” she said.

Ironfist’s life has coincided with heartbreaking blows – Cockburn’s injury, the loss of Florida Law in a lightning strike in 2000, the death of his first sanctioned-winning rider, Jonathan Kiser, at 22 a few months later, the deaths of Cockburn and Voss in 2014, and Harry Filbert in 2019.

But Ironfist perseveres, a fixture on the farm with his wins, his reputation, those apples – and a home for life.

“Horses come up this driveway,” Dorian Filbert said, “but they rarely ever go back down.”