As the founder and director of The Foxie G Foundation, Laurie Calhoun is accustomed to receiving “those” calls. You know the ones – alerts from fellow rescuers who come upon a registered Thoroughbred while flipping lips at auctions. The rallying cries indicate that a horse is in the slaughter pipeline and the clock is ticking. In her role, Calhoun has seen and heard more than most horsemen can imagine. But five years ago, one call stopped her in her tracks.

“I got a call from some advocates who were up at New Holland that there was a Thoroughbred there getting ready to go through the ring by the name of Call Waiting. And I was like ‘OH MY GOD!’ The horse is big, and he’s beautiful, just lovely. How did he end up there?”

Calhoun knew the horse through Mike Trombetta, his last trainer. While still operating as Summer Wind Farm, she and her husband Jerry had several layups for him, including Call Waiting. Calhoun called Trombetta that day and relayed the news.

“You’ve got to be kidding me,” came the response. 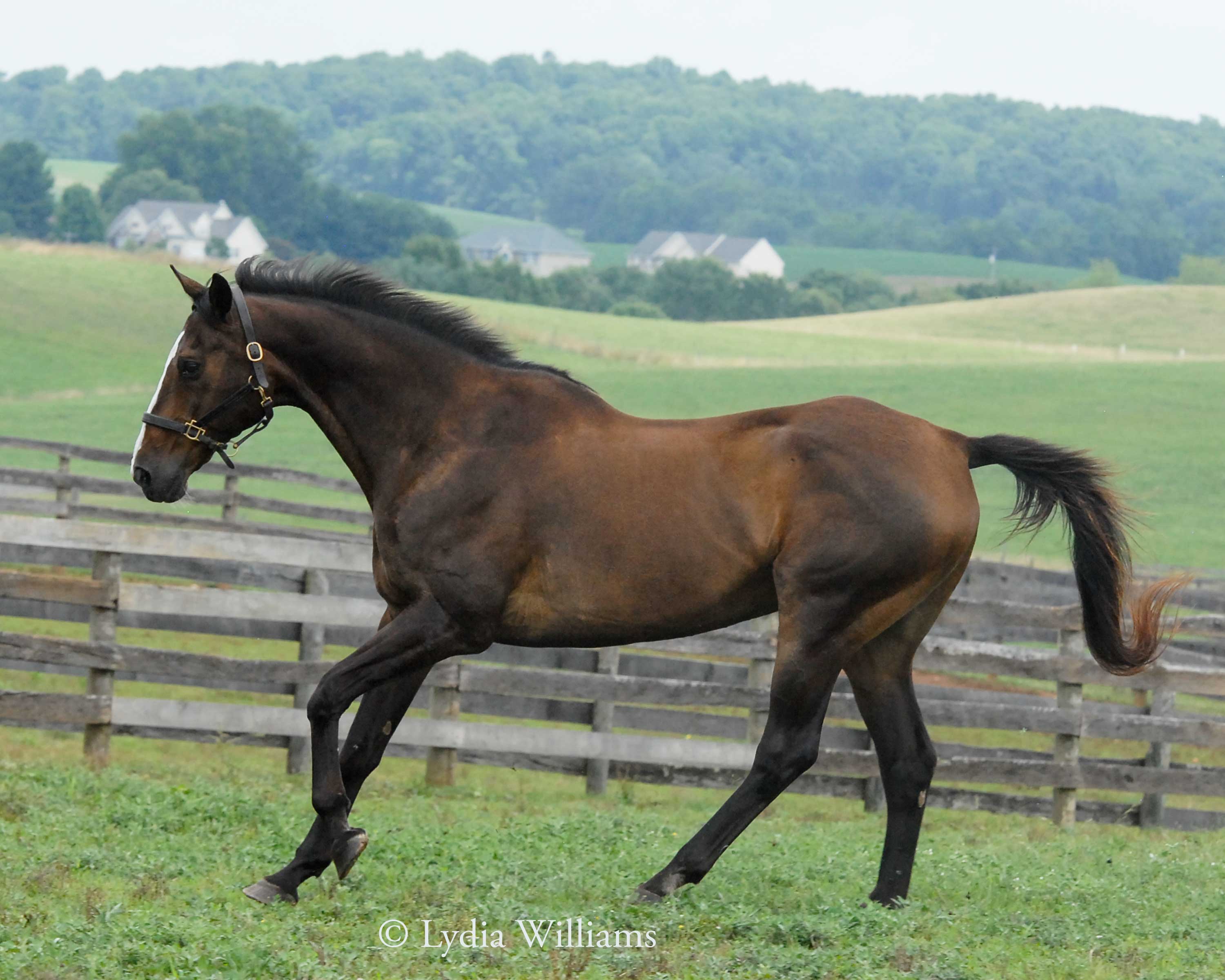 “Mike is really, really responsible and caring,” Calhoun said. “He was really upset when I reached him. He’s so cautious and does such a good job rehoming his horses.”

As many trainers do, Trombetta utilizes an agreement when placing former trainees with new owners for second careers. It stipulates that if the owner can no longer care for the horse, Trombetta will take the animal back with no questions asked.

“We were fond of Call Waiting; he was good to us. After he was done racing, we found him a home,” Trombetta said. “These people took him and cared for him for years. And then, without us ever knowing why, he wound up in a bad place. So we bought him back.”

He had to outbid a kill buyer to do it, but there was no way Trombetta was going to allow Call Waiting to slip through the cracks.

“We try to be as responsible as we can,” he said, “because it’s a bad situation and there are some pretty unscrupulous people out there [at sales]. I’ve saved several horses over the years.”

He claimed the 3-year-old gelding for $30,000 out of his third start at Laurel Park Jan. 12, 2000, for himself, his brother and his father, who operate as R.D.M. Racing Stable. Bred in Florida by Dr. W.S. Karutz, Call Waiting is by Pick Up the Phone out of the Rajab mare Romantic Beauty. That was a hefty sum for the partners 22 years ago, as Trombetta’s operation was considerably smaller than it is now.

Call Waiting’s first race for his new connections caused more than a bit of buyers’ remorse.

“When we claimed him and he had some problems, I thought ‘Boy, I might be in trouble here.’ ”

“He had a chip in his knee and had surgery,” said Trombetta’s assistant Tana Aubrey, for whom Call Waiting was and is a special favorite. “I looked after him the whole time we had him. He won 10 races for us and was such a sweet horse. I loved him.”

Trombetta gave the horse the necessary downtime after the chip removal. A few more starts convinced the trainer to try him on the grass, and the tumblers clicked.

“We put him on the turf and he loved it,” Aubrey said. “Five, five-and-a-half [furlongs] on the grass was his thing. He never won a stake, but he won plenty of races.”

“Call Waiting was one of our better ones, that’s for sure,” Trombetta said in reference to his family’s partnership. “We’re not high-dollar investors; we’ll buy horses at sales and this and that. After the surgery, we gave him time, and when we brought him back, he did nothing but run hard for many years. He was good to everybody involved.”

“Any time they can win a bunch of races and make a few hundred thousand bucks, it’s pretty much above average,” Trombetta said.

With Call Waiting’s safety ensured by the winning bid at New Holland, Trombetta entrusted him to Calhoun at 125-acre Foxie G Foundation in Union Bridge, Md.

“The horse was 20 when he came here, but he was in wonderful condition,” Calhoun said. “He’s 16.3, a big, strong, stout horse. He’d been through a little bit just from the whole process of the dealer’s yard and the sale, but he was the same lovely horse he’d always been.”

Shortly after his arrival, the adopter of another Foxie G horse was looking for a companion.

“Call Waiting had probably been with us for eight months at that point, and we were being very cautious about where he might go. But he was still able to do a little something, and he liked the interaction. She took beautiful care of him. And I told her when she was finished riding, he could come back to us and retire.”

He spent two years with the new owner, who eventually downsized and returned Call Waiting and her original adoptee to Foxie G. He automatically joined the Sanctuary herd, meaning that he will remain there for the rest of his life.

“So now Call is out with what we call The Old People Group,” Calhoun said. “We have four of them. He’s in a mixed herd because he loves the ladies. He gets a little naughty with the other geldings. He gets pushy, bossy and dominant – a little stalliony with them. But the mares just adore him.”

“Bad Debt was tremendously good to us,” said Trombetta. “We retired him seven years ago; we claimed him as well and he made over $800,000. We’ve had a great relationship with Laurie for years and years. We try to get our retirees placed as properly as we can.”

Aubrey couldn’t be happier that her old friend is guaranteed the safe and happy retirement he deserves.

“I remember a guy on the backside of our barn at Laurel had two small children. They disappeared for a few minutes one day, and one was [in Call Waiting’s stall] standing directly under him and the other one was hanging in his tail climbing up like a rope. He never moved or even flinched, he just let them play and climb on him like he was a jungle gym. He is such a gentle giant.”