The story here is not that the stakes-winning Breeders’ Cup champion gets to retire at Happy Acres. The story is your good-to-average, unremarkable horse goes on to have a remarkable after-story.”

The story – as told by Jake Chalfin – is that of Russian Bay, a 20-year-old son of Meadowlake and the Czaravich mare Christina Czarina. But equally, it’s Chalfin’s tale, which is every bit as remarkable.

Chalfin was a lifelong horseman and amateur steeplechase jockey who freelanced retraining off-track Thoroughbreds when Russian Bay came into his life in 2009. His friend, Betsy DeMarino, asked for his assistance with a horse she had.

“I ended up working with her on that and we had some success,” Chalfin said. “So when that horse sold, we decided to start a fun partnership and find another horse to team up on. We put feelers out, and Russian Bay just kind of fell in our laps.”

DeMarino knew the gelding’s trainer/owner, Ollie Keelan. He knew DeMarino was always looking for projects, and there was good rapport and a high level of trust.

Bred in Kentucky, Russian Bay made 36 starts over four seasons on the racetrack – racing for his breeder Peter Van Andel and trainer Frannie Campitelli before cycling through several barns via claims. Highlights include his 2005 season in which he recorded a Gulfstream Park maiden win, a start in the Sir Barton Stakes at Pimlico and a third in the Larry R. Riviello President’s Cup at Philadelphia Park (now Parx Racing). After his last race on Oct. 30, 2008, he retired with statistics of 8-2-7 and $146,610 earned. Shortly thereafter, Keelan contacted DeMarino. She and Chalfin agreed to take the horse without ever seeing him.

“From the minute we saw him our minds were blown,” Chalfin said. “He’s 17 hands and perfectly built. All his parts make sense and he’s a majestic, beautiful horse. It was like, ‘Oh my God, how did we get him? He’s too good to be true.’ ”

Their early assessment of the 7-year-old showed him to be sound and in great condition physically and mentally. Although just off the track, he was able to begin training almost immediately. Based in Unionville, Chalfin had the luxury of Pennsylvania hunt country at his disposal.

“We were training off the farm, a lot of hacking out. If we did do ring work, we’d hack to the ring, so everything was really calm and low stress. He’s a hard worker and enjoyed the connection with us, so he was coming along nicely. After a couple months we shipped him over to (hunter/jumper trainer) Vince Dugan’s and would school there.”

Russian Bay continued to progress, and Chalfin and DeMarino began posting occasional photos of him on social media as a soft pre-marketing tool. The goal was to find him a good home as either a foxhunter or a show horse – whatever best suited him – and make some money.

On Sept. 23, 2010, life happened while Chalfin was making other plans. Riding at the Blue Ridge Fall Races in Berryville, Va., he was paralyzed after a fall from a 3-year-old filly making her first start over jumps. He sustained four fractures to his cervical and thoracic vertebrae. One of the fractures displaced, cutting his spinal cord and causing paralysis from the waist down. 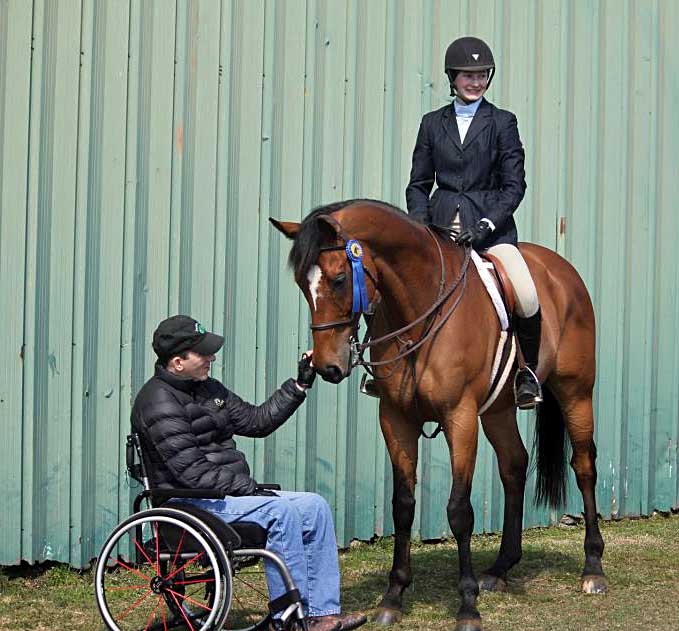 “I was aware of things before I woke up in the hospital,” he said. “But about a week later in the ICU, we were like ‘What am I going do with all my unfinished business?’ Basically, the village rallied.”

Hunter/jumper trainer Jen Berry stepped up first, taking Russian Bay to her Integrity Farms. Another close friend, Lisa Scott, rode with Berry, and they collaborated to keep the horse moving toward Chalfin’s goal of finding him the ideal situation and owner.

“The other cool thing was that the farriers and vets all donated their services to keep him going,” Chalfin said. “Mark Donaldson of Unionville Equine would give him his shots and look after him. Jen’s farrier was Ed Scheckner. So Jen and Lisa took care of the board bill and the training, and Mark and Ed did vet and foot work. Devon Cox, a working student for Jen, did a lot of the showing and schooling. She’s a beautiful little rider and got along great with him.”

After a year with Berry and Scott, another friend of Chalfin’s, Gillian Beale King, stepped in. Located in Radnor, Pa., King showed the gelding, providing exposure to many clients in the area.

Regardless of who had the horse, the challenge was always the same. Russian Bay was such an imposing physical presence that some riders, despite their experience, tended to tense up as soon as they got on him. And that was his “Off” switch. As Chalfin put it, “You got out of him what you put into him.”

Man, woman, child – it made no difference to Russian Bay if the rider on his back was calm and relaxed. From King, Russian Bay moved to jumper trainer/competitor Priscilla Godsoe at The Covert Farm in Nottingham, Pa.

“Everyone who had him – Jen, Lisa, Gillian – added polish; he was improved every step of the way,” Chalfin said. “Priscilla covered all the expenses herself with the idea that when she sold him she’d pay herself back, and whatever remained would go to my medical fund. She instantly fell in love with him. And at some point, they started calling him Jake, so he’s been Jake ever since.”

In 2012, 14-year-old Victoria Latham was ready to graduate from ponies to horses. Her parents arranged for her to try a few prospects at Godsoe’s farm. Godsoe observed as the teenager rode several horses before mentioning that she had another horse to consider.

“I have one more that I want you to try, but I’m going to put you on him and we’ll know in a minute,” Godsoe told Latham.

“That was how he was,” she said. “You either were calm and got along with him and he was wonderful, or he would just say, ‘You’re not for me.’ So I tried him and we immediately clicked. I knew right away. And that was the first time I ever jumped 3 feet. It was a pretty incredible first ride.”

The Lathams, also from Unionville, went home, and Victoria told her parents that Russian Bay was the horse she wanted . . . and she wanted to move to Godsoe’s farm and switch from hunters to jumpers. They competed in local shows all through Latham’s high school years.

“She was cleaning up on him,” Chalfin said. “They were winning a lot. They had a ton of fun together.”

An injury and a bout with Lyme disease sidelined the horse for nearly a year. But when Latham headed to Wake Forest University in Winston-Salem, N.C., Russian Bay went with her.

“We did the intercollegiate circuit,” she said. “He was there the whole four years, and it was amazing. By the time I was moving to college – after the Lyme’s – he had slowed down a little. Then I got a second horse and took both with me.”

Russian Bay became a team horse for the Wake Forest squad and was a popular mount among the riders “because he was really good.”

Latham spent her junior year of college in France, and Russian Bay was leased to a boarder at the barn in North Carolina during her absence. That rider competed in lower-level eventing with him, enjoying her own success with the gelding.

Latham graduated in 2020 with a double major in international affairs and French. After remaining in Winston-Salem during the Covid pandemic in 2020, she moved to Washington, D.C., and began her post-graduate program at American University in 2021. And, of course, Russian Bay went with her.

“I had another horse as well, so I moved both to D.C. He was used there for lessons for a little bit. My program is one year at American and one year in Costa Rica; I’m about a year into it.

“He loves to work. Even when he wasn’t as competitive for me and wasn’t showing as much anymore, he just loves to be ridden. As long as he had someone to lease him or ride him, he was happy. So we kept him going as long as he wanted to.”

Around six months ago, Russian Bay let his people know he was ready for a life of leisure. With Latham living in Costa Rica, Russian Bay is retired on a farm in Montgomery County, Md., close to Latham’s mother, who sees him frequently.

“I’m still his owner and will be forever,” Latham said.

Chalfin, who stays connected to racing as an official at steeplechase meets, still marvels over how it all played out.

“All of us were professionals trying to train and place this OTTB, and Victoria was the goal,” Chalfin said. “She was the owner we were hoping for. Now he’s retired and they still own and look after him. That’s the perfect scenario for a horse off the track – retraining and finding their forever home.”