It’s that uber-prolific pipeline in Maryland’s Baltimore and Harford counties. Everyone knows everyone, and nearly everyone hunts. Most have done it their whole lives, many with their parents. A horse wasn’t much on the racetrack? No worries, someone is always looking for something nice to ride, a new project, or a mentor/babysitter for young horses.

And if you know Michelle Rosenkilde, you know that’s exactly how she thinks. A horse would be hard-pressed to find a better scenario.

Irish import Kings Canyon (Ire) landed in that sweet spot four years ago. The chestnut son of English-bred Stowaway and the Irish mare Hurricane Debbie was bred by Ronald O’Neill and foaled May 29, 2006. His seven starts yielded unremarkable statistics of 1-1-1 and $5,388. He ran six times in Ireland and England – the last two for American owner Irv Naylor – with the only win at Carlisle in a novice hurdle in December 2011. His resume shows pull-ups, and in his last race before coming to the United States, he finished a dismal 22nd in a handicap hurdle at Fairyhouse.

His lone North American start came on the Winterthur card in May 2013 for Naylor and new trainer Billy Meister. Kings Canyon finished third, of four finishers, going 31⁄4 miles over timber with apprentice Nick Carter aboard. The chart states he “stumbled at the second-last fence and was done.”

As a racehorse. But plenty of options await a big, solid Irish horse who can jump. Given time to heal a bowed tendon, he resurfaced with the Hillsboro Hounds in Lynnville, Tenn., and crossed paths with Robin Dahl Owens.

“The master of that hunt liked to whip, but Kings Canyon wasn’t quick enough for that,” she said. “I would hunt with his wife, and I rode the horse quite a few times and got along with him really well.”

Owens bought the horse and took him from the Nashville area to Lexington, Ky., after she married Cobra Farm manager Mike Owens, before ultimately deciding she wanted to get back into showing jumpers rather than foxhunting.

“I felt like hunting was what he knew, and he was good at it. He’s a big guy and he’s super comfortable,” she said. “He was a little on the lazy side. He’ll jump anything, but he didn’t want to go first-flight fast or any of that. But he was great at hanging out, hilltopping, second flight or any of that kind of thing. He was really fun to trail ride and just go larking over the fences, because jumping was not a problem for him. He had been in a hurry most of his life, and he was ready to kick back. And I didn’t blame him.” 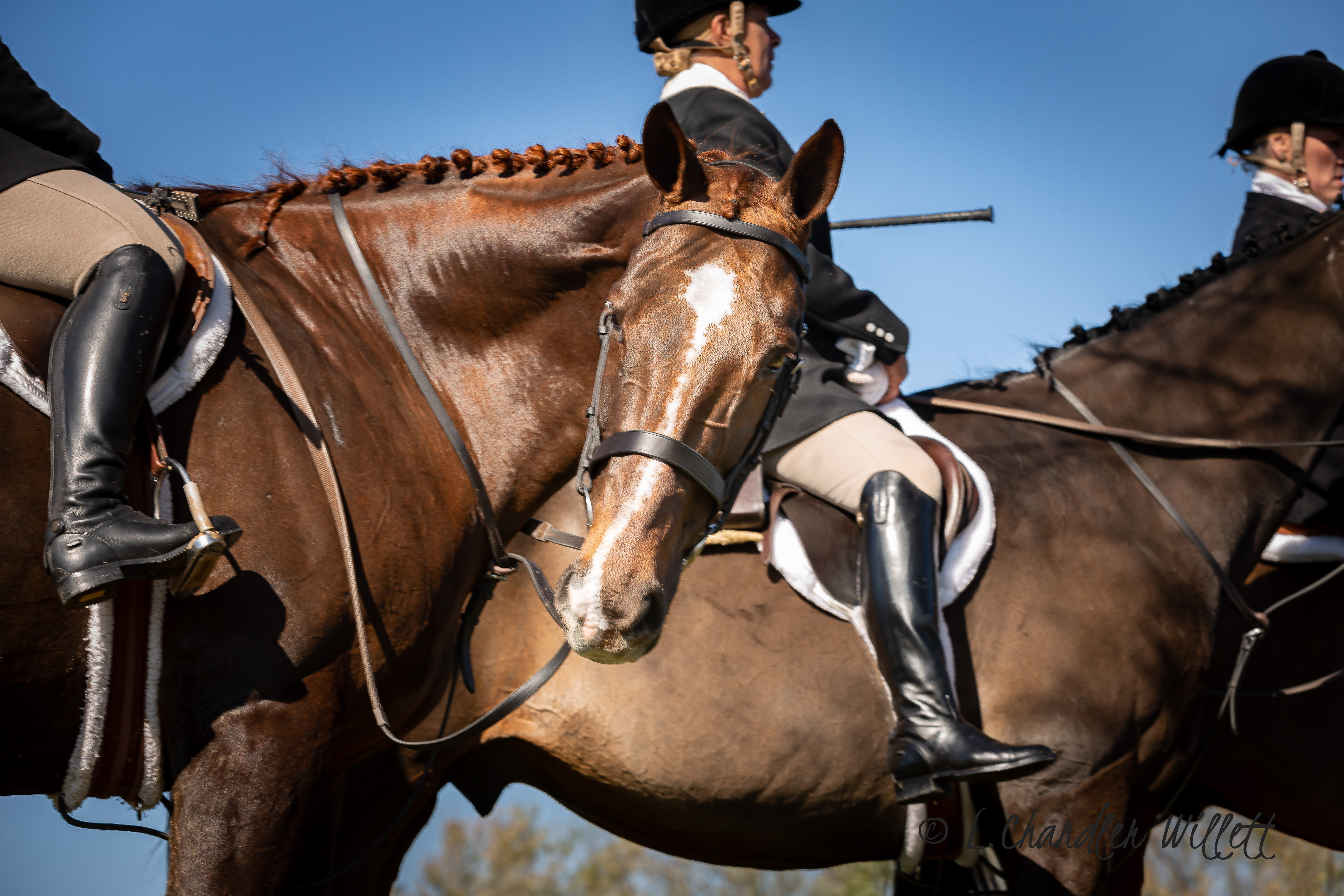 Owens sent the gelding to Maryland to her son, steeplechase jockey Gus Dahl, who was living at the Elkridge-Harford Hunt Club at the time. The plan was for Dahl to put more polish on the horse, get him out and seen among the locals and sold to a suitable home.

“Gus is so well-connected and such a beautiful rider,” Michelle Rosenkilde said. “He called me up one day and said, ‘I’ve got this really nice horse.’ I went over to look at him and said ‘Dammmnn.’ He looks like a warmblood, he’s so big and beautiful.”

While stabled at the hunt club, Kings Canyon took the occasional unaccompanied foray into the surrounding countryside. Michelle remembers a social-media post alerting the area that the gelding was having a spin around the neighborhood.

The Facebook post stated, “There is a chestnut horse with a green Rambo on running down Pocock Road.” Kings Canyon was simply jumping out of paddocks at the hunt club, and perhaps checking out potential new homes.

Michelle contacted friends she thought would be interested in the horse. Just before the sale was finalized, Kings Canyon got kicked while turned out. Although not serious, the injury torpedoed the transaction.

This got Michelle’s wheels turning, not a huge surprise to Dahl or anyone who knows her. Certain he would be perfect for husband Jeff, Michelle told Dahl he could bring the horse to Hunting Fields. His retirement home was secured; once with the Rosenkildes, horses rarely, if ever, leave. It almost makes you wonder if Kings Canyon knew exactly what he was doing.

Michelle always has a squadron of young riders, predominantly female, who help at Hunting Fields in exchange for riding and hunting opportunities. In no time, Kings Canyon became the most coveted mount in the barn.

“He’s the horse that everybody fights over. He just does everything perfectly,” she said. “He literally will stand in the crossties and not move a muscle. Anybody can do anything with that horse on the ground. He never gets anxious and does everything you ask of him. He’s just really, really cool.”

He’s also the perfect horse for Michelle, who – despite years in the hunt field – considers herself “not a real brave rider.” She recounted a story about one day out hunting when the group came upon a fallen tree.

“I just take it easy in the back of the field. My friend was with me, and she was leading second or third field. I see everyone ahead of me heading into a huge, downed tree. And I was like ‘Oh Godddd.’ But we just trotted right down and went over it. It didn’t even feel like a jump; I couldn’t believe it. He takes such good care of you. He’s very, very safe.”

He also loves mud and softer ground. When many riders choose to sit out a wet day, Michelle and Kings Canyon relish the deeper going.

Safe and reliable, yes. But both Rosenkildes remember the first time one of their toddler grandchildren wanted to get close.

“It’s bizarre the way he loves our grandkids. They are always wanting to lead King around. They’re 3 and 2, and it gives us a heart attack because he is a really big horse. But we end up having pictures of him with the kids on our Christmas cards.”

So, how has Jeff enjoyed having such a stellar hunter at his disposal?