If only Reraise could talk.

From humble beginnings, he went through the Keeneland sales ring twice: an RNA as a weanling at $4,700, and then selling as a yearling for a bargain-basement price of $8,000. He took his connections to dizzying heights, inking his then 27-year-old trainer Craig Dollase’s name in the record books as the youngest conditioner of a Breeders’ Cup winner. He earned just shy of $1 million, finishing second only once in his nine-race, eight-win career. 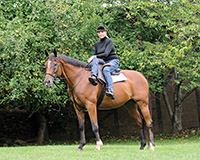 Yet within a few years, he had completely fallen off the radar screen, leaving even Dollase to wonder what happened. And when he did resurface five years ago, he had ended up on the farm of philanthropist Rose Marie Bogley at one of the most celebrated and storied properties in Virginia hunt country. Ahhhh, serendipity.

Now 17, Reraise was bred in Kentucky by Willard Sergent. By Northern Dancer’s son Danzatore out of the $7,200 earner Get Us to Paris, by Policeman (Fr), little about Reraise’s pedigree screamed “multiple graded stakes winner.” And it hinted even less at sprinter’s speed, suggesting more of a turf route suitability. But as an untried 2-year-old in California, the swift Reraise caught the eye of Bob Feld, who assembled the partnership deal that sold the gelding to owners Barry Fey, Moon Han, Dr. Frank Sinatra and Dr. Larry Opas. While always impressed by the horse’s form and speed figures, Feld could never have imagined the success that awaited.

Reraise won his first and only start at 2 in October 1997, running for a $62,500 claiming tag at Santa Anita. Former concert promoter Fey, the majority owner at 60 percent, immediately paid the $600 fee to make Reraise eligible for the Triple Crown in 1998. Dollase begged to differ, instead turning the horse out for 75 days to give his immature knees a chance to knit before putting him to work. Reraise won again in his second career start, an allowance at Hollywood Park in May 1998, and then repaid the young trainer’s patience by winning the Playa Del Rey Stakes by 6 lengths that July over Del Mar Futurity-G2 winner Souvenir Copy. His only defeat followed six weeks later at Del Mar, when he finished second to the Charlie Whittingham trainee Young At Heart after washing out before the race.

But on September 26 at Turfway Park, Reraise captured the 6-furlong Kentucky Cup Sprint-G2, missing the track record by just a fifth of a second. Crowded at the start, Reraise blasted past the field to win by 12 lengths in 1:08.50. Wisely, Fey and his minority partners had paid the $120,000 supplemental fee to the Breeders’ Cup Sprint just two weeks before his dazzling score at Turfway.

At Churchill Downs on November 7, 1998, sophomore Reraise faced off against 13 formidable speedsters?–?most of them older horses?–?in the
$1 million Breeders’ Cup Sprint-G1. Sent off at 3.80-1, Reraise led at every call, beating Grand Slam and Kona Gold. The four wins from five starts in 1998 garnered him the Eclipse Award for champion sprinter.

Rested until April 1999, Reraise made a triumphant comeback in Oaklawn Park’s Count Fleet Sprint Handicap-G3. A month later at Golden Gate Fields, he faced just three opponents in the Oakland Handicap and “won as he pleased.” But chronic abcesses in his feet and tendon injuries sidelined the gelding until November 2000, when he won an allowance race at Hollywood Park.

It would be a year before Reraise was heard from again. Then in the barn of trainer Tom Skiffington, the champion re-injured a tendon while preparing for yet another return to the races at Belmont Park in November 2001. That setback proved to be the end of his remarkable career.

Fast forward six years. Michelle Trufant, assistant trainer for noted Virginia horsewoman Barbara Graham, called her friend Rose Marie Bogley about a big bay gelding in residence at Graham’s farm. Bogley, owner of Peace and Plenty at Bollingbrook in Upperville, was one of the most accomplished sidesaddle competitors in the country. Trufant was sure that the horse was perfectly suited for Bogley, a long-time breeder and owner who was also an active and passionate proponent of Thoroughbred rescue efforts.

“Michelle called and said ‘Barbara’s got a nice big horse here who’s quiet enough for you to ride sidesaddle,’?” Bogley said. “I had no idea who he was; they just sent this beautiful horse over. And I thought well, he’s certainly big enough; he has great neck and everything.”

The horse went to Graham with some rehabilitation and a potential return to the races in mind. Instead, he found a new life.

About eight months after Reraise arrived at her farm, Bogley was on the phone with her niece one day and mentioned the horse. Bogley, who to this day readily and happily professes her ignorance of all things electronic, knew nothing more than her big bay horse’s name. After a little research, her niece phoned back with the astounding news?–?the latest addition to the Peace and Plenty herd was a bona fide star.

“He is absolutely wonderful,” Bogley said. “But I’ve never cantered him?–?he’s big, he’s strong. He’s great looking, but he’s really so powerful, and you don’t realize it until you’re on him. He dumped me once; he wheeled up in this field here,” she said, gesturing toward a slow hill, “and off I went. So a couple of times when he really tensed up, I hopped off. And I never used to do that. But I’m old now, and I don’t want to be in a wheelchair. I ride him every Saturday and sometimes during the week for about an hour or so.”

“They wrote me a letter back, and they too were interested to know how I got him.”

In April 2011, Dollase’s wife Nancy penned that “My husband had tried for a time to find out where they had taken him, but to no avail. When we received your photos and update, it brought back lovely memories and happiness because Reraise deserves nothing but the best. . . and it seems through your photos that he is getting exactly that. Could you please keep us informed of how he is doing?”

The Dollases needn’t worry. Reraise is surrounded by peace and plenty.