Jack Fisher was on a busman’s holiday the first time he saw Tarsky (Fr). Well, sort of. It was actually his honeymoon in France in 1992, when the Monkton, Md.-based trainer (and former jump jockey) seized the opportunity to ride in an amateur race at Auteil for leading French conditioner Jack-Hubert Barbe. 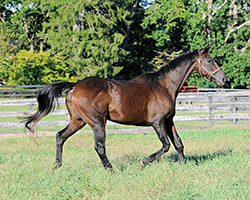 Fisher’s trip over the course’s massive hedges and gaping ditches wasn’t a smooth one; he suffered a broken back and concussion when his mount fell. But Tarsky, ridden that day by Barbe’s son and Fisher’s friend Hubert Barbe, left a lasting impression. “I figured Tarsky must be pretty nice. I knew he was for sale, and I thought if a trainer like that puts his son on him, he must be a pretty good jumper.”

Fisher’s client Irv Naylor was always looking to bolster his string of jumpers, so persuading him to purchase the horse was no hard sell?–?and thus began Tarsky’s American life as steeplechaser, foxhunter, hack horse and happy retiree at Country Life Farm in Bel Air, Md.

Naylor paid $20,000 for Tarsky, who shipped to Fisher’s barn in October 1993. Then 8, the hardy brown gelding had won four times over jumps in France and came to the United States as a solid timber prospect. The son of French stallion Fereed could not be registered by The Jockey Club as he did not possess Thoroughbred foal papers, but was registered by the National Steeplechase Association. Considered an Autre Que Pur Sange (which translates to “other than pure blood”) in France, he is a Selle Francais, known for their jump, intelligence, stamina and success as steeplechase horses. The breed has been influenced greatly by Thoroughbreds and Tarsky is by Thoroughbred sire Fereed (a son of French Guineas winner Zeddaan and a great-grandson of *Nasrullah).

Fisher believed in Tarsky, and that was good enough for Naylor.

“He was quite a nice horse in France and had won some races,” Naylor explained. “And those are big hurdle fences over there. So I was aware of him and of course interested when I heard he was for sale.”

Tarsky proved his worth in short order, winning his first start under Fisher at My Lady’s Manor in 1994. Out six times that year, he was never worse than third and wrapped up the season with a second in the Pennsylvania Hunt Cup. Returning as a 10-year-old in 1995, Tarsky again used My Lady’s Manor for his comeback, piloted by Paddy Neilson to a third behind Ivory Poacher and Welter Weight. It was the perfect tune-up. One week later, Tarsky and Neilson won the Grand National at Butler over 1994 winner Buck Jakes and Welter Weight. Tarsky’s course record of 5:51 still stands. The victory etched a milestone for Neilson, who notched Grand National victories in five decades. His first, aboard Coke Hi, came in 1958. After the 1994 win, the 53-year-old jockey said, “I don’t have the vaguest idea what this proves, except that I’m old and I don’t know when to quit.”

The same could be said of his mount. While 1995 was definitely his banner year, Tarsky continued to face the flag for Fisher and Naylor until 1998. Then 13, he was retired after an attempt at the Maryland Hunt Cup which ended with a fall at the fourth fence (ridden again that day by Neilson who, it should be noted, still hadn’t quit).

All said and done, Tarsky’s record in the United States was 16-3-5-4 under NSA rules with another three starts (and one win) in point-to-points. He earned $65,950. Naylor, hoping to dip into the well one more time, sent the following to Hubert Barbe in France:

“I write to tell you how much I like the horse. He is absolutely dead honest. He always gives 100%?–?whether in the hunting field or in a steeplechase. He is the favorite in the stable because he is kind and sweet and loves to nuzzle, and he has proven to be an absolute gentleman in the hunting field. The combination of his durability, jumping ability and sweet disposition has enamored him to all. And so I might be interested in another Tarsky…”

“I think Tarsky was just a little bit old,” Fisher remembered. “He didn’t have any problems; he just kinda told us that he’d had enough. The good horses that I give away?–?we try to place them with good homes?–?I think the horses are happier to go and do something instead of just hang out in the field.”

Tarsky found his home with the Elkridge-Harford Hounds and huntsman Geoff Hyde, who assigned him to honorary whipper-in Maryanna Skowronski. “He had a bit of a bad knee,” she said. “I whipped in off of him for at least two seasons. He was a great whip horse, but he was strong. I rode him in a double twisted wire snaffle with a bib. I really loved him; he would jump for me.”

When the time came for Elkridge-Harford to retire Tarsky, Skowronski immediately thought of her friend Ellen Pons of Country Life Farm. “I didn’t have any way to take him, and I knew Ellen was looking for something she could just go trail riding on. So she came over, rode him, and liked him.”

The Pons family had just acquired Merryland Farm, and Ellen Pons had no mount. “Merryland was in conservation. I was just learning the area and was looking for a horse that wouldn’t be herd-bound so I could go out by myself and not worry. He was quiet enough, although he would occasionally see things. But he was fine. I don’t ride him anymore, but I know I could. I’ve never seen him have a bad day, and he’s 27 now.”

No bad days, but some hilarious anecdotes. About six years ago, Merryland farm manager J.R. Walsh used Tarsky to pony when his own horse was sidelined by colic surgery. Ellen’s brother-in-law Mike Pons squired a group of Korean visitors to training one morning. The visitors toured the farm, took dozens of photos, looked at the horses, watched training sessions and asked questions.

“They were click-click-click-click taking pictures, and this one smaller guy said to J.R., ‘I want to ride your horse,’?” said Ellen. “After the set was finished, he said again, ‘Can I get on your horse?’ There was one English-speaking visitor who told J.R. that this man used to be a jockey. So he lets this guy up on him.”

Tarsky must have simply heard “jockey” and thought of Fisher or Neilson, because the old horse took off like his younger self. He headed for the rail at first, then made a lap of the Merryland track. Walsh thought “international incident,” but Tarsky and his rider pulled up at the gap and all was well.

In addition to dabbling in ponying and international relations, Tarsky exhibited a marked enthusiasm for standing in as a teaser when duty called. During his years at Merryland, Pons noted he would become very attached to the mares on the other side of his paddock fence. It didn’t go unnoticed. “He’d see them and come out like ‘Hi, girls! I’m here for you!’ He would stand there with his gelded self; you should have seen him. This year we had some mares here at Country Life, and he was like ‘Yes! This is my business now!’?”

But it wasn’t too long before the bloom was off even that particular rose, according to Pons. “He was really interested for most of the season until early May, and then he was like ‘Are we still doing this?’?”