“It’s like skiing down a mountain backwards on the rocks. Most of the time it’s the agony of defeat. But every once in a blue moon, you get the thrill of victory.”

Bob Haynes still remembers his response to reporters minutes after Due’s victory in the 2006 Maryland Million Classic. Truth be told, there’s next to nothing Haynes doesn’t remember about Due’s career–from the day he claimed the gray gelding for $25,000 in October 2004 to the Maryland-bred’s final start in the Jennings Handicap of 2007. 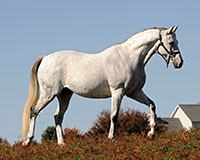 A son of Rinka Das, Due was produced in 2001 from breeder King Leatherbury’s homebred Endette, a daughter of Leatherbury trainee Thirty Eight Paces and Dronette (Drone).

Although she retired a maiden, Endette distinguished herself as a broodmare. Her son Ah Day (Malibu Moon) came along two years after Due and is still adding to a career that includes 14 wins and nearly $1 million in earnings. Endette’s full-sister Twofox is the dam of Leatherbury’s current star, millionaire Ben’s Cat.

Due made three starts for Leatherbury before being claimed by trainer Ron Sweeney for $25,000 in November 2003. Almost a year later, Due had three wins when Haynes claimed him with trainer Margaret Slysz.

Serious quarter cracks necessitated a sabbatical, and Due returned in 2005 with trainer Dale Capuano.

“I’d gotten this brilliant idea that I wanted to become a trainer,” Haynes said. To that end, he spent a few summer months in Capuano’s barn, putting in six days a week to learn the craft. It was a serious stretch for the confessed night person. “But going out there and hanging on the backside with the hotwalkers, grooms, riders, assistant trainers; it gave me a different perspective on horse racing.”

The notion was short-lived, but an education. By then a successful owner, Haynes was accustomed to spending his afternoons on the front side, going to the paddock while Capuano saddled his runners. He can’t relay enough about the profound effect of his time on the backstretch and the insight it provided. Haynes is unrestrained in his opinions about the responsibilities of Thoroughbred ownership, firmly believing that everyone who takes out a license should spend time on the backstretch, observing and absorbing all it takes to get a horse to the races.

“I see it all the time–and they call this the Sport of Kings–but I see people come in, hot-shot owners who bring their friends and buddies, and it’s ‘Look at me, I’m a racehorse owner.’ When that racehorse can no longer do them any good from a racing standpoint, so often they toss them aside like they are yesterday’s garbage. And you can’t do that, because these animals, whether they’re Zenyatta or a horse that ran in a $2,500 claiming race, they deserve to be cared for. They can’t speak out loud, but they talk to you if you listen to them. You have to be sensitive about it.”

Due said plenty to Haynes. Six months before Maryland Million Day in 2006, the owner was confident enough to not only target the Classic, but to predict Due’s victory. He told Capuano’s assistant John Brady all about it – predicting a Classic victory when the horse would have been more suited to the Starter Handicap.

“As we got up to the race, we cross-entered him in the Classic and the Starter Handicap,” said Haynes. “Dale was pretty gracious; he said ‘you know, the Starter is easier, but what do you think?’ I said I wanted to run in the Classic. As long as I wasn’t making a grave mistake, Dale would kinda let me call the shots.”

Two weeks before the race, Haynes named up-and-coming Rosie Napravnik on the horse and shared his premonition. Calling her skeptical is putting it mildly. “She looked at me like I was crazy,” Haynes admitted.
That year’s Maryland Million Classic appeared to belong to millionaire Chero­kee’s Boy, making his final start before retiring to stud. Standing on a bench on the Laurel Park apron, Haynes watched the fractions on the infield video screen. Early, Due was last. Surprisingly, frontrunning Cherokee’s Boy began to labor just as Due and Napravnik soared into high gear.

“I’m watching Due, and he’s starting this big turn of foot. He’s really rolling like a freight train,” Haynes said. “I looked at my buddy who had come with me and said ‘I’m about ready to win the biggest race of my career.’ Due came swinging on the outside with Rosie and boom!?–?quarter-of-a-million-dollar race.”

With Capuano needing to get to the paddock to saddle a runner for the next race, he handed media duties to Haynes. One reporter asked the obvious question: “What’s it like being a racehorse owner?”
“I remember what I said about the mountain. And it was a great feeling, a really wonderful feeling.”

Due followed up his Maryland Million score with a third in the Jennings Handicap that December and a second in the John B. Campbell Handicap the next February. After a summer off, his career wound down with mediocre efforts in an allowance and repeat appearances in that year’s Classic and Jennings.

When it came to a cushy retirement, Due was due. He’d earned the statistics: 39-8-5-7; and the money: $359,160. Haynes sent his warrior to Laurie and Jerry Calhoun at Summer Wind Farm in Libertytown, Md.
“I can’t tell you how good I feel about them,” Haynes said. “They take care of all my horses and everything is done very, very well. These retired Thoroughbreds, you just have to give them time. But they have a purpose, and at the end of the day you just want to make sure they’re happy.”

Due is happy; Laurie Calhoun can attest to that. One of the youngest retirees in a herd that includes familiar old warriors Private Slip, Fireside Brass, Ticonderoga and Glockenspiel, Due slipped seamlessly into the group and quickly asserted himself as half class clown, half annoying upstart.

Always quirky, he developed an amusing but bothersome habit. At every feeding, he migrates from tub to tub, taking a bite or two from each. It makes no difference if one of his pasturemates happens to be in the middle of a meal, and his pattern is entirely random.

Amazingly, his pals never run him off.

“He just goes around to every feed tub morning and evening and eats with whatever horse he wants to eat with,” Calhoun said. “They’ll put their ears back like ‘Would you go away?’ but he’s like ‘Nope.’ He’ll just eat from the same tub with them. He’ll have breakfast with this one and then that one, and go back to the other one.”

Due’s not a bully, he’s just social. And he likes to stay busy. When Calhoun goes to the field, she’s always sure of one thing: Due will have his halter on, but most of the rest will not – having rubbed them off on fence posts or deposited them somewhere in the field. The older guys have clearly resigned themselves that it’s Due’s world, and they’re just living in it.

“Due does whatever he wants, and it will always be that way. You cannot change his mind, and life is completely on his terms,” Calhoun said. “And that is perfectly fine with Due.”