Summer 1995. Microsoft released a new version of Windows, nobody knew what a DVD was, the NASDAQ closed above 1,000 for the first time, Jerry Garcia passed away. Cigar’s winning streak stood at nine.
And Betsy Barr turned the search for a project into a family treasure. 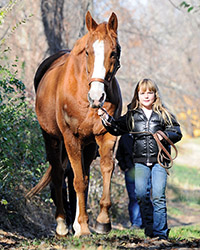 The lifelong foxhunter went to Dela­ware Park with a simple aim. Find a horse with good bone, balance and size for about $1,000. While inspecting another horse, she couldn’t miss a chestnut gelding kicking the walls and throwing himself against the door of his stall. When she approached, the horse pricked his ears, stood quietly and allowed her to pet and scratch him.

“He’s never like that, he’s just not a happy horse,” said the trainer. “The guys are all scared of him.”

Physically, the chestnut ticked all the boxes; he was attractive and well put-together. He was 8 years old, she was told, had won a 1½-mile allowance on the turf at Saratoga earlier in his career, and had Secretariat in his pedigree. He had tailed off in several of his most recent starts, running in Florida for a few seasons before ending up at Delaware with trainer Ruth Fittante. The only obvious issue was a tendon–clearly an old bow–recently blistered.

“I felt sorry for him,” Barr said, “because you could tell it was driving him crazy. At that point the skin was just peeling off of it. It looked awful, but it was all superficial.”

Barr liked the horse enough to pursue the matter, and the deal was struck. She’s not sure of the sales price, but he came in under budget. At that point, Barr hadn’t done any research on her new purchase, knowing only that his name was Torbay. His arrival at Linden Hill, the West Chester, Pa., farm she owns with husband Doug, still sticks in their memories. Getting him off the trailer, through the field and into the barn was a production.

“I remember looking at his tendon and thinking ‘Oh my God, what has she bought?’?” Doug grinned.

The papers arrived with the horse that day, and it was only after Torbay was safely settled in that the Barrs actually sat down to read them. Bred by Juddmonte Farms and foaled on April 16, 1987, Torbay was a son of Secretariat and the first foal of Devon Diva, a daughter of The Minstrel. In five seasons on the track, he made 45 starts, won three times, placed 15 more and earned $69,683. Stunned to realize that the “maniac” they had just bedded down was regally bred, they delved further into his family.

It took a few weeks, but Torbay became part of the Barr clan.

“He wasn’t mean, but he’d been on the track for so long that everything was like ‘OhmyGod, OhmyGod,’ ” Betsy said. “It took maybe two weeks of him dragging us around and then he figured out that nothing bad was going to happen to him.”

The rest was a breeze. With proper management, the old tendon became a non-issue, and Torbay never took a lame step. Running and jumping? No problem.

“He hunted like a rock star–always, even in his very first season,” Barr said. “He’s really smart, and nothing rattles him. I don’t think I’ve ever been on him when he’s genuinely spooked at something. If something scares him he’ll look at it, then he kind of absorbs it, and then he’ll go on with it. He’s very honest that way.”

After nearly 18 years with the Barrs, there’s very little Torbay hasn’t done. Betsy and Doug hunted him, first with the Brandywine pack and then later with Mr. Stewart’s Cheshire Foxhounds. Betsy used him to outride at point-to-points.
At home, he babysits weanlings and still flirts with brood­mares. But after reading about the success of Pimlico’s Totally Thoroughbred Horse Show last summer, Betsy decided there was still one thing Torbay needed to do. Photos of that event’s huge leadline classes convinced her that Torbay needed to cross “Horse Show” off his Bucket List.

The Barrs have a steeplechase horse, Parade Lap, in training at Fair Hill with Fenneka Bentley. A conversation with Bentley and exercise rider Alex Brown informed the Barrs that Fair Hill planned to host its own Thoroughbred show, From Furlongs to Fences, in late October. Decision made, Betsy entered their daughter Elizabeth, then 7, in the leadline class on Torbay.

“I really wanted Elizabeth to get to do that with him just because he was 25 at the time,” Betsy said. “He is so great with her and (younger daughter) Annie. We thought it was as good an opportunity as we would ever find. It was close, and the reason behind having the horse show was great.”

For Torbay, it was just another family duty. Never turning a hair, he packed Elizabeth around the ring on that rainy Sunday morning, finishing second. To racing fans, he’s the son of a legend; a last link to an immortal. But to a small blond girl clutching a cherished red ribbon, Torbay will always be a hero.