Stacie Eggleton has been there, done that. In a career now spanning four decades, the Monkton, Md., native has walked hots, traveled the country working for Hall of Fame trainers and breezed Breeders’ Cup champions. Her resume includes the names Zito and Frankel, and she can share first-hand knowledge of morning mounts Theatrical (Ire), Broad Brush and Concern. 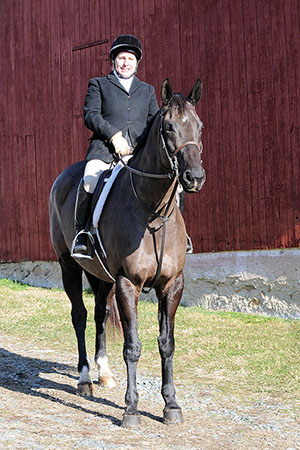 But the horse who makes Eggleton giddy is a quirky 14-year-old gelding with a record so unremarkable that trainer Holly Robinson half-jokingly nicknamed him “Wasted Air.”

The Jockey Club prefers to call him Magic Roland, and his Maryland roots run deep. Bred and owned by Richard Blue Jr., the son of Grade 1 winner Norquestor was the first foal of the Baederwood mare Rooteen, a full-sister to Blue’s gritty graded stakes winner Root Boy. But the similarities stopped there. Trained in his three starts by Ann Merryman, Magic Roland was unanimously and unequivocally considered one of the most talentless horses Merryman and business partner Robinson had ever had in their barn.

“At no time,” said Robinson, “did he ever show any ability at all. He was a nervous wreck, so we tried to be gentle and kind, but that just made him worse. And I think he was trying, but it was like a kid being asked to do something that he’s really not capable of doing.”

His statistics bear it out: never better than sixth, he earned $160 before Merry-man and Blue pulled the plug in the summer of 2002.

Eggleton, by then, had long since returned to Maryland and resumed work for Merryman at The Orebanks in Sparks. Merryman and Robinson are renowned for repurposing their retirees into solid foxhunters and Eggleton plays an integral role in the process. She popped Magic Roland over a few small logs, realized he was full of jump, and the deal was sealed.

“Ann told me he was sound and he looked good,” Eggleton said. “He used to dump everyone when he was in training; he would wheel and throw them. He’s just insecure like that. But at the farm, Magic Roland got it right away. I’m not saying he’s the prettiest jumper you’ll see, but he’s very safe.”

So safe that even Merryman relishes the opportunity to hunt him. This winter, for a joint meet between the Elkridge-Harford and Green Spring Valley hounds, Eggleton took a green horse while Merryman rode Magic Roland.

“It was a screaming day; we were flying,” Eggleton said. Merryman went along for the ride and told her friend, “Who would’ve ever thought that I would love this horse? He’s safe, he’s nice and he’s my kind of horse.”

Honest, in-demand foxhunter is just one of the sturdy bay’s many trades. He was outrider Frank Durkee’s mount at last year’s Elkridge-Harford Point-to-Point and My Lady’s Manor races. He has twice been part of the winning team for optimum time at the Foxhall Team Chase. At The Orebanks, he’s a trusted babysitter to layups, and Merryman “would pony off of him all day long.” Happiest in the company of other horses, his former insecurities rarely surface. And after more than 10 years together, Eggleton knows all of his buckles and kinks. “I’ve been able to do so many different things with him,” she said, “and I just love it.”

Different barely covers it. During Preakness Week 2004, Magic Roland filled the role of War Admiral in Pimlico’s re-enactment of the match race from the movie Seabiscuit. Sent back to Pimlico for a brief stint to get re-acclimated, Magic Roland rapidly reverted to his former self. His meltdown in the paddock on performance day prompted Robinson to deadpan “And that’s why I never wanted to see this horse again.” He pulled it together when it counted, though, playing his part with expert timing and professionalism under former jockey/now agent Frank Douglas.

Fast forward to 2011. When the advertising agency producing the Kegasus campaign for the Preakness needed a live equine model, racing secretary Georganne Hale wasted no time drafting her good friend Eggleton and Magic Roland. Naturally, it was unknown territory.

“The first time was at Pimlico; they just needed him in the stall,” Eggleton said. “And it was pretty funny because these people really didn’t know anything about horses.”
One rookie mistake the film crew made was hanging sheets of plastic around the stall – on a windy day – and then expecting the horse to placidly hang his head out for the shot. With the wide-eyed Magic Roland plastered against the back wall, Eggleton and Merryman couldn’t keep straight faces as they used their shoulders against his rump to try to push him toward the stall door.

The horse was recast in 2012, and filming moved to a more sophisticated set in a studio in Hunt Valley, complete with green screen and various sets and shooting locations.

“He was in three different scenes over two days, which took forever,” Eggleton said. “For the first one, I had to walk him up a ramp and stand there. Then in the next scene, he was in a living room on a carpet while this guy had to dance beside him. And I had to make him move back and forth like he was dancing. Magic was getting a little upset about that, but luckily we had blinkers in the truck which we put on him, and I put cotton in his ears. So then the guy did a spin and fell right under the horse. And they actually asked, ‘Can you make him swish his tail?’ I was like ‘Uh, NO.’ ”

It’s a story that could very easily have had a less than happy ending. In the wrong hands, horses like Magic Roland all too frequently fall between the cracks. Even Robinson finally gives up and admits that the pair have always been the perfect match.

“I give Stacie a really hard time about him; I don’t cut her any slack,” she said. “But she adores him, and the horse is as sweet as he can be. And as I’ve always told her, ‘Everybody’s got to have one friend, and I’m glad Magic Roland has you.’ ”