Amy Hopkins Daney loves the opportunity to talk about Elberton. His story, after all, is her story. It’s about the blood, the land, the history and the old-school work ethic that produced not only Elberton’s family, but her own. 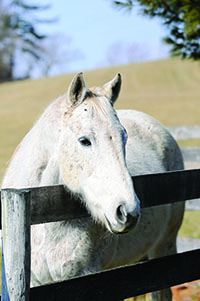 Amy Hopkins grew up on 150-acre Elberton Hill Farm in Darlington, Md., the daughter of successful breeders ?C. Frank and Martha Hopkins. Gifted to the Hopkins family’s ancestors by the British throne in the 1600s, the farm originally spanned 2,500 acres of rolling Harford County land. Frank and Martha Hopkins took up residence in the early 1960s with an eye toward building a Thoroughbred nursery. Every bit the quintessential Maryland family homestead in the manner of the Pons’ Country Life and the Boniface’s nearby Bonita Farm, Elberton Hill is today home to matriarch Martha Hopkins, sons Frank and Mike and their families, and Amy, her husband Michael Daney and daughters Cassandra and Ellie.

At its zenith, Elberton Hill stood 13 stallions and boarded upward of 100 mares each summer.

“And I groomed every one of those stallions every night,” Amy said. “I was in charge of them. It was a lot of fun.”

One such stallion was Perfecting, owned by Elberton Hill and Louis and Patrice Wolfson’s Harbor View Farm. The son of Triple Crown champion Affirmed won Del Mar’s La Jolla Handicap-G3 and $190,869 before retiring to stud. From one of his early crops came Elberton Hill’s multiple stakes winner Aberfoyle. Perfecting’s best offspring was a small gray colt foaled in 1997 out of the Masked Dancer mare Masked Barb, a multiple stakes winner of $293,957. Named Elberton, he was as tough as the hardy birds that patrol the skies over the nearby Susquehanna River all winter.

“Even as a baby and a 2-year-old, he was just something,” said Amy. “He was a real fireball to break. I used to do all the groundwork and my niece Abby would always go out on the pony with him. You could never leave him alone; he was a wild man.”

After prepping at home, Elberton went to trainer Luigi Gino, who also trained the gelding’s dam. Gino soon discovered that Amy hadn’t stretched the truth. Elberton could go along just fine and then suddenly decide to rear, wheel, prop or use whatever method necessary to unseat his rider. Regardless, he had guts and talent. He performed steadily enough at 2 and 3 on the Maryland circuit, but in the fall of his 4-year-old season (2001) Elberton stepped into his own.

His first black-type outing was Pimlico’s Mister Diz Stakes that September, and as Amy relayed, it was one of the most meaningful days the Hopkins family had ever experienced. With regular rider Alberto Delgado in the tack for the 5-furlong turf test, Elberton’s winning time of 56.11 seconds broke Pimlico’s course record.

“It was the weekend after the 9/11 attacks, and I just remember being in tears,” said Amy. “It was such a tragic time, and here we were all still able to function and do our things and live in such a great place. He won that race and it was just really emotional for us.”

Elberton kept his connections on edge for another month after his Mister Diz conquest. Entered next in the Maryland Million Turf Stakes, he silenced anyone who labeled him a sprinter by leading wire to wire in a driving score over Watchman’s Warning and Cynics Beware. That win photo is Amy’s favorite: Elberton is shown crossing the finish line 21?4 lengths in front with the Maryland flag waving above Pimlico’s turf course.

Seeing only stakes action in his first six starts the next year, the gelding attempted to repeat his Mister Diz and Maryland Million Turf victories. He finished third in the Mister Diz by less than a length, but his effort on Maryland Million Day stands out for Amy. Elberton and Delgado again led throughout, but were nipped at the wire and lost by a short neck to old rival La Reine’s Terms. Elberton ran for another two seasons before an arthritic ankle prompted his retirement. A second career, however, was never in the plans. “I ground broke him so I know exactly what he’s capable of doing,” Amy said. “Even when Luigi sent him home, he said ‘You’re just gonna turn him out, right?’?”

“He’ll never have anybody on him again; he’s too much. Yet he is the kindest horse in the world,” said Amy. “The kids would go sledding over on the front hill, and he’d always be standing there watching them. I used to swear that if they’d had peppermints in their pockets, they probably could have attached a shank to him and he would have dragged them back up the hill.”

Elberton’s field mates include Londonderry, a stakes-placed full sister to Aberfoyle and the dam of five winners from eight foals?–?stakes winner Four Carats, Doha, Beech Cat, Derrywall and steeplechaser Foyle. Her final foal is current Elberton Hill runner Elbertini. But it was the late Docent, a dual Maryland Million Classic winning earner of $802,704, who added the most color to Elberton’s retirement. By the time Docent (who ran for Mike Daney’s parents, Mr. and Mrs. Bernard Daney), joined the herd, Elberton had already established himself as commander in chief. Physically, they were Mutt and Jeff. Although both gray, Docent towered over Elberton, and decided upon arrival that he would call the shots in the field from that point forward.

Mike Daney suppressed laughter as he told what happened next.

“When they were first put together in the field, they got into a fight and knocked the fence down. Basically, there was a smackdown and they both ended up in the old cannery across the road. After that they eventually made peace.”
Eventually. The retirees were banished to a different field, away from the rest, to work out their differences. It worked, because they lived peacefully together for years until Docent died of colic (while on assignment at a riding camp) in 2011 and left the field-boss duties to Elberton.

“Once they became buddies, they were allowed to come back and join the group,” said Amy. “Elberton’s still got that fire in there; he’s an amazing, special horse. And you have to take care of the ones that take care of you.”