Cain had Abel. Richard the Lionheart had King John. Groucho had Harpo. And on a small farm near Coatesville, Pa., Cheerfy has Cheer Cheer. 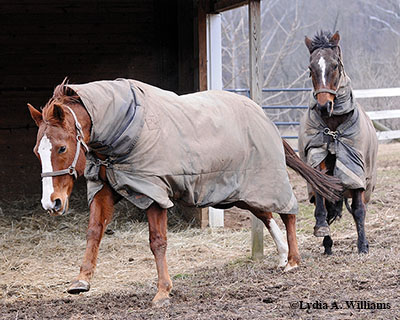 But according to owners Greg and Andie Bicho, the New Jersey-bred sons of Two Davids and the Amazing mare You Will Like It are pretty much polar opposites.

Cheerfy, 27, was the far superior runner, setting a track record sprinting at Garden State Park in the 1990 Rancocas Stakes before retiring after four seasons with a record of 39-13-4-4 and $271,156. He won the New Jersey Futurity at Meadowlands as a 2-year-old in December 1988 and two months later defeated future Horse of the Year Black Tie Affair (Ire) in the Delaware Valley Stakes at Garden State.

Both horses were bred and owned by Stanley Joselson and trained by the late Bob Camac. They ended up with the Bichos through Andie’s association with the late Dr. William (Bud) Wright, whose Labadie Mill Farm in Maryland was used by Joselson and Camac. When Andie’s beloved eventer Wimbly (registered with The Jockey Club as Up ’n Adam) suffered a career-ending injury, Dr. Wright called to suggest Cheerfy as a replacement.

“Have I got a horse for you!” Wright told Andie. The veterinarian/trainer/borderline horse whisperer explained that Cheerfy would need at least a year off due to a bowed tendon, so Andie brought him home and turned him out to help him recover and adjust to the slower pace of life as a riding horse.

“He was never actually lame, but it was probably a year and a half before I ever got on him,” she said. “He was spirited, but not mean spirited. He would never do anything malicious. Cheerfy is an incredible athlete; he has the loveliest canter you could ever sit on. I should have done more with him but I didn’t. Unfortunately I just didn’t have the time. But I hacked him out in the country and started jumping him. I rode him until he was about 10.”

Greg Bicho only rode him once. “It was very early in his career as a rider,” his wife said. “They picked up a canter and it became a full blown run-off. He’s been wanting to get back on him again, but Cheerfy’s 27 now?–?what’s the point?”

When the couple met 21 years ago, Greg had never been on a horse and knew nothing about them. Andie, an exercise-turned-event rider, insisted he become “a horseman first and then a rider.” Her own involvement in the discipline took her to the Barcelona Olympics in 1992 as groom for United States Equestrian Team member Dorothy Trapp Crowell and her horse Molokai. Greg, a competitive ski racer, embraced his new interest with zeal.

Their nuclear family today includes the two geldings, the mare Love Me Tomorrow (Lacey) and her 5-year-old daughter Tomorrow Is Here (Friday), two massive barn cats and two Jack Russell Terriers at home. They split barn duties with Andie handling morning chores before heading to work at Victory Brewing Company in Downingtown, Pa., and systems specialist Greg wrapping up at night. “He checks them over and knocks them off at night. He’s become a really good leg guy. They’re still fed twice a day, and they spend as much time as possible outside.” Tails neatly banged and manes pulled, the boys look more like competition horses in training than 20-something retirees.

One summer morning gave Andie a serious scare. Normally both horses head to the fence as soon as they see her, but on this day Cheerfy was lying down in the shed?–?something unusual for him. “I’d seen him lie down in the field before, but he was down in the shed and wouldn’t respond when I called him. I had to call Greg, who left work to get over here. Turns out Cheerfy was colicking. He ended up being fine, but it was unsettling to come out here in the morning and see the big horse down.”

Cheer Cheer ended up with the Bichos when a chip in his knee forced his retirement.

“I brought him home and lo and behold, on Christmas Eve that chip floated and this horse was dead lame,” Andie said. “Then we sent him to New Bolton and Dean Richardson took the chip out. He’s had so many ups and downs. He’s real flatfooted, and he’d have lots of abscesses; any little thing. But he was always so kind to ride and is a real character. He spent two winters down in Aiken with (event rider/trainer) Heidi White and everyone fought over who’d get to ride him.”

Cheer Cheer actually gained some notoriety in veterinary circles for another surgery Richardson performed when diagnosed with a keratoma?–?a rare benign tumor of the inner layer of keratin-producing epidermal hoof wall cells. Richardson devised a way to approach the tumor from the top of the hoof so as not to damage the coronet band, using a carbon fiber patch to allow the hoof to heal. “It was rather experimental at the time,” Greg explained. “That was in May, and Cheer Cheer went down to Aiken and was eventing again that fall. It worked and he has never had another problem since.”

Greg has ridden Cheer Cheer in novice events in the area and hopes to do a few paper chases with him this season. “He’s still a good, strong horse, and he enjoys it.” The pair also took part in the trail ride at last year’s Furlongs to Fences weekend at Fair Hill. “We were galloping in company with all these Thoroughbreds en masse; it would have been something to have a picture of that day. Ears pricked, eyes bright, ‘We’re doing what we’re supposed to be doing!’ It was great.”