Details
From May 2013 Issue
Written by Maggie Kimmitt

Susie Chatfield-Taylor climbed the black four-board fence with a bag of carrots in her grip. “Come on, girls,” she trilled. “Come onnnnnnnn. . .” A football field away, six mares grazed in deep new grass as a soft spring rain began. Wonders Delight, the only gray among the group, raised her head momentarily, considered the offer, and went back to munching. “They might not be too interested,” Chatfield-Taylor grinned. “They really have everything they need out here.” 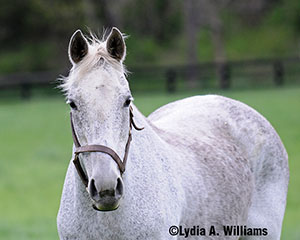 That’s one way of putting it. Morgan’s Ford Farm in Front Royal, Va., is unques-tionably one of the most organically beautiful properties in this or any region. Owned by Susie and husband Wayne, it borders the Shenandoah River within the Blue Ridge Mountains on farmland that was first surveyed by George Washington. Part of a National Historic District, it is protected by permanent conservation easements.

Wonders Delight has called Morgan’s Ford home since the Chatfield-Taylors purchased her as a 12-year-old broodmare at Keeneland’s November breeding stock sale in 1998. “We bought her in fine shape and she was just a big question mark because she had been bred to some nice horses and just plain hadn’t come along,” Wayne said.

On the racetrack, however, the filly left no doubts about her ability. Bred in Pennsylvania by Eve Ledyard, she was the 1986 foal of the *Gallant Man mare Ambry and sired by Icecapade. A half-brother to both Ruffian and Buckfinder, Icecapade was a multiple graded stakes winner for owner/breeder Stuart Janney Jr.

Wonders Delight proved her quality early in 1988, winning Saratoga’s Schuylerville Stakes-G2, Keeneland’s Alcibiades Stakes-G2 and the Clipsetta Stakes at Turfway Park in the silks of Eugene Klein for trainer Wayne Lukas. The bulk of her career–and all four of her black-type wins–were for Lukas, but she was also trained for a time by Happy Alter and finally Bob Camac.

When Wonders Delight retired with a dodgy knee in October 1990 after 36 starts, her resume boasted nine wins, seven seconds and a third and $481,521 earned. She has since had a Pennsylvania-bred stakes race named in her honor.

By the time she caught the attention of the Chatfield-Taylors, Wonders Delight was the dam of five foals. Three eventually made it to the racetrack and two were winners, but neither came remotely close to replicating her talents. She was in foal to Skip Trial at the time of the Keeneland sale. One thing about her struck Wayne when she came home to Morgan’s Ford. “I am always amazed by a horse who can win that kind of money, and then she comes here and she’s never seen a carrot before,” he said. “Didn’t anybody ever give her a treat for winning all those races?”

It didn’t take her long to realize that life on the farm was the ultimate treat. The broodmare barn at Morgan’s Ford is an especially bucolic setting, built on a hill facing the mountains with posts made of logs cut from the farm. Wonders Delight occupied a corner stall in the barn, and one year the Chatfield-Taylors were amused to discover just how much that prime spot meant to the mare.

“She had just shipped in from Kentucky and had her foal by her side,” Wayne told. “We go to get her, and as the horses are just getting to the barn, she brushes past them, runs into the barn without anybody, and goes and gets in that corner stall and waits there. She left her baby in the field with the other mares and said, ‘This is my stall–you all can deal with that out there.’”

Now 27, Wonders Delight produced five named foals for Morgan’s Ford, saving the best for last. Her 2006 foal, the Meadowlake filly Huge, was a stakes-placed winner of four races and $111,968. Wayne proudly pointed out that Morgan’s Ford has had success with mares producing their best foals late in their breeding careers. “We’ve had some luck with older mares having their first stakes winners here at the farm. That’s a nice thing to go against the statistics that the first or second foal is going be the good one. We’ve had a number of mares that have had their best foals as late teenagers, as she did.”

The couple credit the farm itself, based on the fact that the property has always been chemical-free. “The hay is therefore organic, and they all like our hay; it has won prizes. We think that a lot of these horses from this farm can run beyond their pedigrees, and we think that has to do with the quality of the land and the water.”

The Chatfield-Taylors mentioned that although the mare herself does not possess the hot-headedness so often typical of Icecapade’s progeny, she did produce several hot-tempered, nervous foals.

“Some of them could channel that, and some of them couldn’t,” Wayne said. “She is not that way herself; she has her edges because she’s an old and accomplished racehorse, but by and large she does not have the temperament that Icecapade always has a reputation for throwing.”

As Susie put it, “She’s a little shy. She’s never been really personable, but she definitely likes living here.”

One of Wonders Delight’s foals, a son of Commendable, parlayed “living here” into a pretty cushy gig. Several of Wayne’s college classmates from Virginia Tech’s school of architecture, including current university president Charles Steger, would come to the farm each year for a retreat of sorts to visit, discuss work and, according to Susie, “party.” In 2003, that group included professor Herman Cromwell, in from Switzerland for the gathering. Cromwell decided that, while the soiree itself was fine and dandy, the gang needed to experience the fever of racehorse ownership. Walking through the barn, he approached Wonders Delight’s son and announced “This is him. This is the horse we’re going to buy.”

“He was black with a white blaze and four white socks,” Susie said. “That was what did it.”

Wayne was somewhat concerned about the huge involvement of owning a horse with 10 classmates. After much deliberation they christened him Running Bond, an architectural term. Running primarily at Laurel Park and Colonial Downs, he gave the partnership little aside from the thrill of watching their horse get to the gate–losing all nine career starts and making the grand sum of $8,611.

“I think the horse probably wasn’t genuine and maybe had the same temperament we were seeing in a lot of the Icecapades,” said Wayne. “We ended up donating him to the riding program at Virginia Tech, where he is the most doted-on member of that squad. He’s living the life of a pampered show horse.”