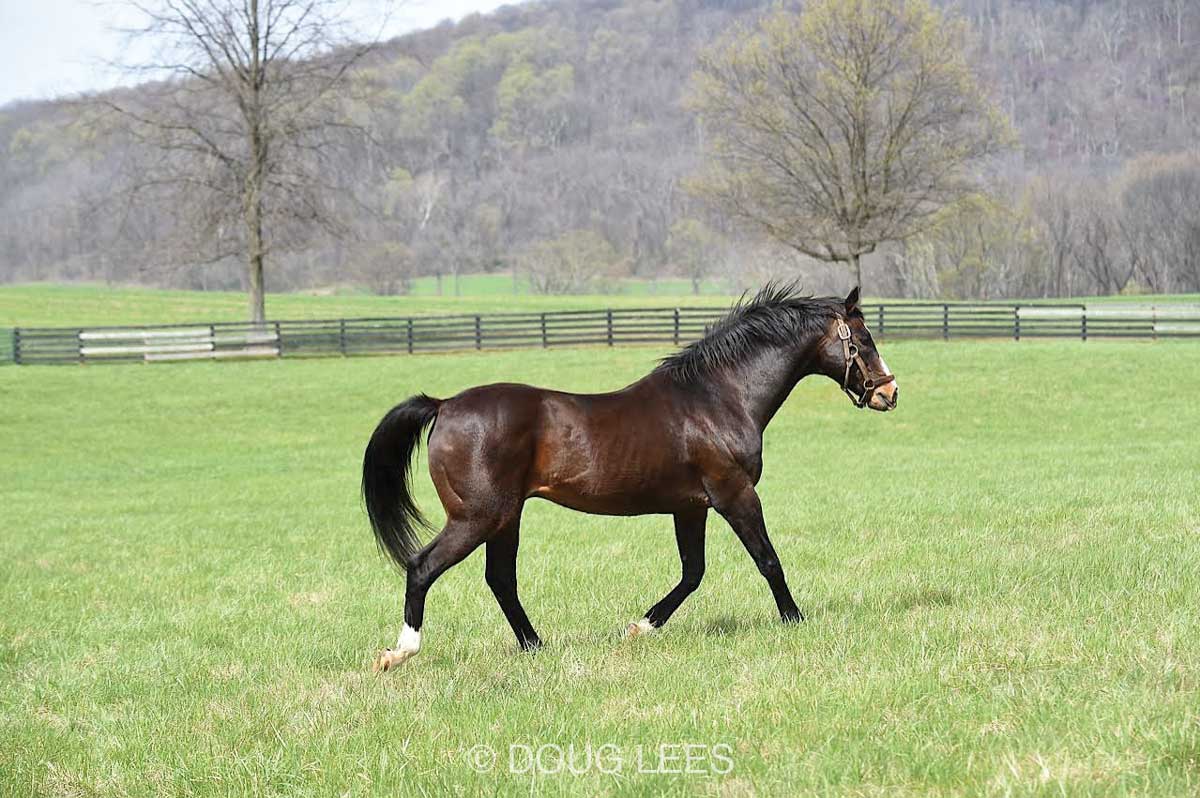 In the German fairy tale “Hansel and Gretel” published by the Brothers Grimm in the early 19th century, the story comes to a happy ending when Hansel and his sister return safely to their father at their childhood home. At Lazy Lane Farm in Upperville, Va., in February 2006, a similar scene played out when Hansel’s equine namesake journeyed back from Japan.

Lazy Lane manager Frank Shipp was there that day, and for all the landmark days in Hansel’s life. In fact, it was Shipp who first spotted Hansel as a yearling in 1989. He and trainer Frank Brothers were at the Kentucky farm of breeder Marvin Little Jr. when the striking bay Virginia-bred son of Woodman—Count On Bonnie, by Dancing Count, caught their attention.

“He was a good looking guy,” Shipp said. “I fell in love with him right there. He was purchased at Keeneland September for $150,000. For a first-year stallion who stood for $12,500 or whatever (Woodman) stood for then–that was a pretty good price.”

The dark bay colt with the megawatt blaze learned his earliest lessons at Lazy Lane before going on to Texas for his on-track training and then to Brothers’ barn. The horse’s debut win at Arlington Park on June 7, 1990, was so impressive that Brothers next stepped him up to stakes company in the Tremont Stakes-G3 at Belmont. That win earned him a spot in the gate at Monmouth three weeks later in the Grade 2 Sapling, where Hansel was handed his first defeat, finishing third behind the Wayne Lukas-trained Deposit Ticket. Hansel chased that one home again just two weeks later in Saratoga’s Hopeful-G1, this time closing the gap to finish second. In his last freshman start that September, Hansel returned to Arlington Park and scored in the Arlington-Washington Futurity-G2.

In 1991, Hansel hit the Triple Crown trail in Florida as a legitimate Derby contender. He finished fifth in Fly So Free’s Fountain of Youth Stakes-G2, but rebounded to finish third a month later in the Florida Derby-G1. Sent to Turfway Park two weeks later, Hansel and Jerry Bailey captured the Jim Beam Stakes-G2, then steamrolled into Keeneland to snag the Lexington-G2 by 9 lengths.

His spring campaign was enough to stamp him the favorite in the 1991 Kentucky Derby, but it was not to be. Hansel was a well beaten 10th, with chart notes stating that he “gave way readily.”

“It wasn’t traffic, I can tell you that,” Shipp remembered. “He just had an off day for whatever reason. I don’t know that his work the week before was the best of his career, either. But you know–woulda, coulda, shoulda. He had a bad race that day and then he never had another one.”

No, he certainly didn’t.

At Pimlico in the Preakness, Hansel was dominant, besting the field by 7 lengths. Derby winner Strike the Gold nearly ran him down in the Belmont, but Hansel dug in and fought him off by a head–giving Hansel two-thirds of the Triple Crown. Next came a third in the Haskell Invitational-G1 before Brothers ventured to Saratoga for the Travers-G1.

“Frankie told me the day of the Travers when he was in the paddock–he said ‘This horse is doing really well and he’ll run well today. But the next race after this will be his best race,’ ” Shipp said. But after losing by a neck to Corporate Report, Hansel was vanned off with a bowed tendon. He never ran again. “Talk about a heartbreaker. . . to hear that and have that happen right after the race.”

After only 14 starts, Hansel’s record was 7-2-3 with $2,936,586 earned. Within weeks, owner Joe Allbritton had offers for stud duty. Hansel was sold to Gainsborough Stud, with Lazy Lane retaining breeding rights. Softening the blow of the colt’s abrupt and early retirement was the Eclipse Award as the top 3-year-old colt of 1991.

Hansel stood in Kentucky for six years before relocating to Questroyal Stud in New York for two seasons. When the stallion was sold to Japanese interests in 2000, Allbritton made it known that he would like to have the horse back upon his retirement from stud duty. At the end of 2005, those wheels were put into motion.

Shipp explained the logistics: “There was a 14-hour time difference and a huge language barrier involved in getting him back here. It took some help to get it done. That’s a long trip; the plane had to stop in Alaska to refuel and then he had to be quarantined in New York for 48 hours. And there are federal regulations regarding returning breeding stallions. Depending on which country they come from, they have to be quarantined for a while and then test bred, and the mares they are bred to have to be tested for CEM (contagious equine metritis). It takes about six weeks, but we were able to do that part of it here at Lazy Lane.”

Requirements fulfilled, Hansel settled back into life at Lazy Lane as if he’d never left. “We put him in the paddock, he ran around for about three minutes, put his head down and started eating grass and has been doing that ever since.”

So special was the horse that Lazy Lane purchased the Polish Navy mare Rixa expressly to breed to Hansel. “She had five Hansels,” Shipp explained. “There was one year we donated a couple of seasons to Virginia Tech’s research center over at Middleburg. We let them breed to him. So I know there are a couple of fillies from that program, but I don’t think any of them made the races. Almost all of ours did.”

While there was a bit of interest in Hansel upon his return to Virginia, All-britton didn’t want to put the horse through the rigors of commercial breeding and felt that the numbers didn’t realistically support offering him publicly.

Rixa’s first two offspring, Rixa Marie (2007) and Helicopter Ace (2008), were winners. Her 2009 gelding was injured as a youngster and now has a loving home as a pleasure horse. Bonnie Rose, foaled in 2010, won her first start for Lazy Lane and Al Stall on March 27 at the Fair Grounds and was third in a starter allowance on the turf at Arlington Park in late May. Shipp believes that the best might be Rixa’s 2-year-old, a gelding named Hunterwood, who will eventually go to Stall. The very last Hansel foal was born in 2012 to the Mineshaft mare Kate C., also owned by Lazy Lane.

“It’s interesting,” Shipp said, “that all of his stakes winners were sired in the U.S., and none while he was in Japan.” Among his top runners were Guided Tour, Quantum Merit, Magellan and Prince of Thieves in the United States, Fruits of Love in England and Dubai, and French champion Loving Claim.

Hansel’s world is a beautiful tucked-away parcel of Lazy Lane with a barn he has all to himself–by choice. “We tried to put somebody in the paddock next to him but it didn’t really agree with him. He couldn’t settle into that. So he’s very happy the way he is. And he doesn’t look like a 25-year-old horse.”

Allbritton died late last year, but his widow Barbara spends time at the farm and the racing/breeding side of Lazy Lane continues. In addition to Hansel, farm residents include his son Blaze and Blues (winner of the 2000 Woodlawn Stakes at Pimlico) and five-time breeding partner Rixa. Cared for by grooms Jimmy Pierce and Tony Byington among other Laze Lane staffers, Hansel still gets plenty of visitors.

One gentleman from Chicago stopped by recently, informing Shipp that visiting the stallion “was on his Bucket List.” A couple from Pennsylvania who have family in the Upperville area come to see him several times a year, always with his much coveted carrots. And his former partner Jerry Bailey spent a long afternoon with Hansel earlier this year. “He was on his way to Florida, stopped here and spent about 3 to 4 hours with him. He took some video of him out in the paddock and sent it to his wife,” Shipp said.

With the death of Deputed Testamony last year, Hansel is the oldest winner of a Triple Crown race. And appreciates the attention.

“He absolutely knows how special he is. It’s incredible, the presence that he has. There’s something they call ‘the look of eagles’–you don’t see it very often, but he’s got it.”

See video from our visit with Hansel on our YouTube Channel!