Karin De Francis couldn’t stop repeating herself. Couldn’t stop the hugs, the squeezes, the carrots, the kisses on the dark bay’s nose. And she wasn’t ashamed of the fact that she couldn’t help it. “I love you Clyde. . . I love you!”

Karin’s Clyde, the object of her affections, never won a stakes race, never set a track record, didn’t earn a great deal of money. He didn’t have to. Now 30, the son of Cutlass and Talatha (by Poker) was one of the last horses campaigned by Karin’s father, the late Frank De Francis. The Washington, D.C., attorney and international trade consultant was largely credited with revitalizing the Maryland racing industry during his tenure as principle owner of Pimlico and Laurel Park. Through his accessibility and hands-on management style, De Francis became known and respected as a man fiercely devoted to his product and his patrons. And Thoroughbred racing was a passion that Karin shared with her father. 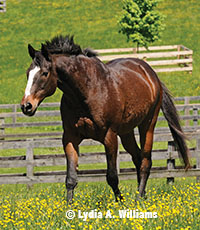 Upon the retirement and syndication of his best runner, Hail Emperor (Graustark—Queen Empress, by Bold Ruler), Frank De Francis headed to Kentucky to shop for broodmares.
“He had just gotten our farm in Howard County,” Karin said. “The idea was to stand Hail Emperor at Glade Valley Farm and then he would buy a bunch of mares and they would stay on our farm there. He picked up Clyde as a weanling; I don’t know why he got him when he was going down there to get broodmares, but he brought him up.”

She smiles at the memory of her first encounter with the youngster. He was standing with his feet planted wide apart, with a big shock of black forelock. He looked at Karin, and pricked his ears. She looked back, and considered the young horse. After getting to know him, she decided that he looked very British and seemed like the kind of person who’d be having a mug of ale at a pub in London.

“He looks like a Clyde,” she said. So they named him Karin’s Clyde.

He was the first weanling to live on De Francis’ farm. And with the help of then farm manager Jack Gill, Karin was the colt’s first rider. Bred in Florida by Dan Lasater, Karin’s Clyde began his racing career as a 3-year-old at Pimlico in May 1986 under the tutelage of John Lenzini Jr. After breaking his maiden in his second start, he plied his trade in the allowance and claiming ranks for four seasons, never once venturing from Laurel Park or Pimlico. He broke a bone in his ankle shortly after Frank De Francis passed away from heart failure at 62 in August 1989.

“I retired him then because he had too many happy memories associated with my father and I didn’t want anything to happen to him,” Karin said.

By the time Karin’s Clyde headed home to the farm, he had compiled a record of 30-8-4-3 and earned $57,760. There was never a second career planned; the ankle wouldn’t withstand much, so Karin turned him out and kept him as a pet. A ridgling, he had always been on the ornery side, trying to take the occasional chunk out of a groom or handler. Karin would routinely jog around the farm’s property, and she picked up the habit of going into the horse’s paddock.

“I’d go in and he’d just right run beside me. But then the next minute, he’d try to bite my nose off,” she said. “He’s mercurial. Clyde has always been capable of great affection or great terror.”
When a move to Baltimore became necessary for Karin, her husband and their two children, she fretted over leaving the horse at the farm with just a caretaker and no equine companions. Her friend and co-worker Georganne Hale, racing secretary for the Maryland Jockey Club, knew exactly where he should go. 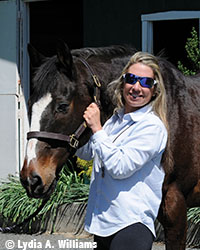 “I remember Karin’s Clyde running when I was paddock judge,” Hale said. “So when Karin first came to me I said ‘Wow–he’s still alive?’ Karin adores her animals. Her dogs, cats, horses–they are all very important to her and she takes such good care of them. And no one takes better care of older horses than Poppet Pitts. They all look like a million dollars, so I thought that was the perfect place for Karin to take him. It’s such a beautiful farm. Little did I know that he’d live this long.”

As Pitts tells it, the day that Karin’s Clyde arrived at her 56-acre Monkton, Md., farm eight years ago was extremely emotional for De Francis. “He had always been with her family and represented a special time for her and her father, so it was bitter-sweet,” she said. “But even today he’s still ornery. All 30 years of him.”

Pitts is famous for her touch with old timers. “They all come to Poppet’s to die, but then they never seem to,” she half-joked. “Clyde’s at least 10 years older than everything else here, and sounder than most of them.” Among his pasture mates is 20-year-old Stone Hill Road (Devil’s Bag—Composing, by Mr. Prospector). Bred in Kentucky by Mary Lou Whitney, Stone Hill Road raced on the flat and over jumps for Willmott Stables before trainer Janet Elliot sent him to the farm for a break several years ago. He never left.

Although she misses having him at home, De Francis admits that she never has a worry about Karin’s Clyde. “He looks amazing, acts like a 2-year-old and is happy as a clam on this gorgeous farm,” she said. “I’d like to retire out here myself.”