Sally Barnes needed a hand. Attending a Steeplechase 101 clinic in Maryland in 2011, she and husband Casey were given an overgirth to use on her horse. At a loss for how to use it, they asked trainer Joe Davies for a quick how-to. Davies happily obliged, and while saddling the gelding he noticed the brass nameplate on the horse’s halter:

BOVARI
Nijinsky II–L’Attrayante (FR).
“Is that who this is?” he asked the couple. Yes, he was told. “No way–this used to be my horse.” 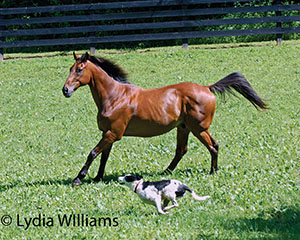 It had been a long time since the two had crossed paths. Bred by Allen Paulson, Bovari never raced on the flat (despite his regal pedigree) and made his racing debut for Davies as a 3-year-old in the Future Champions Cup Hurdle Stakes at Great Meadow in 1995. It was an inauspicious inauguration; he pulled up. But over the next 4 1?2 years, Bovari spent time with some of the top names in steeplechasing.

He was produced from the Tyrant mare L’Attrayante (Fr), a multiple graded/group stakes winner of $935,969. She was a classic winner in France (Poule d’Essai des Pouliches-G1) and Ireland (Irish One Thousand Guineas-G1) before capturing Woodbine’s E. P. Taylor Stakes-G2 in her North American debut in 1983. Bovari was among the last crop of Nijinsky II, who won the English Triple Crown in 1970. Trained by the legendary Vincent O’Brien, Nijinsky sired the winners of both the Kentucky Derby and Epsom Derby in 1986?–?Ferdinand and Shahrastani.

But Bovari did not follow his ancestors to glory on the flat tracks. Instead, his past performances reveal that he was well traveled on the jump circuit, running at Tryon, Atlanta, Camden, Aiken, Foxfield and Saratoga among other meets. After Davies, Tom Voss, Sanna Hendriks, Neil Morris and Tom Kirlin all set the tack before the big bay retired in April 2000 with a record of 20-3-6-2 and $40,775 earned.

He ended up in the barn of Middleburg, Va., foxhunter Barbara Riggs, where he quickly became Sally Barnes’ favorite. The London native had come over on an exchange visa to work for trainer Doug Fout and fell in love with the area?–?and with Bovari.

“Barbara Riggs had a lot of nice horses who were pushbutton, and he was so stubborn,” she said. “If he’s not going to go over a jump, there’s no way you’re going to get him over it. No means no.”

Sally began riding him in 2001. “I think Barbara had too many horses and was leaning more toward the Percheron/Thoroughbred crosses; she hunts with Piedmont,” Sally said. “He was my favorite, but he could be a real monster and I think she had just had enough of his nonsense.”

By 2005, Riggs decided they belonged together.

And by that time, Sally had paired up with Casey, whom she met via Match.com. They felt a bit ahead of the curve with the Internet dating concept. “At that time it was still considered a bit taboo,” Casey explained. “For the longest time we would say we were introduced by a mutual friend?–?Dr. Phil. He was the celebrity endorsement back then, so that was our joke for a few years.”

Casey’s background was in Saddlebred and Morgan horses. He competed in saddle seat events while growing up in Pennsylvania and then switched to Standardbreds with a stint on harness tracks while in college.

“Sally was living in Northern Virginia and I was living up here when we met,” he said. “As you can imagine, the horse thing can be kind of a deal-breaker with some couples, but we shared the interest.”

Today they share life with Bovari, a few foxhunters, some young homebreds and a frenetic Border Collie named Chase at their 35-acre Pheasant House Farm in Dallastown, Pa. The farm was a from-the-ground-up labor of love for the couple, who moved in seven years ago. “It was a lot of work. It has changed dramatically - new roofs, new water, new fencing. This farm was just an old cattle farm when we got it,” Casey said.

Bovari serves as mentor and disciplinarian to the Barnes’ adolescent Thoroughbreds, all of whom are Pennsylvania-sired and -bred. A 3-year-old by Cetewayo is in training at Penn National with David Geist, on target to make his first start in September. A 2-year-old by Tekken (Ire) waits in the wings, with two more Rimrod babies on the farm. Bovari has schooled them all. “We break everything here by ponying them first, and he is a rock star with the babies,” Sally said. “He doesn’t take ANY nonsense.”

That seems to be Bovari’s mantra. Casey and Sally freely admit that it’s his world, and they’re just living in it. Life is on his terms, and those terms must be met. “Unfortunately we think we’re the winners in the negotiation?–?but he has us trained.”

In truth, though, Bovari has ante’d up plenty since partnering with Sally. They’ve hunted, ridden in amateur steeplechase races, and even competed on Hunt Night at the Pennsylvania National Horse Show in Harrisburg, one of the prestigious stops on the hunter/jumper show circuit. That, however, was a one-time deal. “I was absolutely terrified and will never ever do it again,” Sally shuddered. “I wanted to throw up. I hate riding in a ring!”

Now 21, Bovari’s status can be listed as semi-retired. “I rode him with Mt. Carmel for a while,” Sally said. “He’s the kind of horse you can take hunting and he’ll be phenomenal, but he’ll be sore for three days.” And as both Sally and Casey are quick to state, Bovari doesn’t owe them a thing. He’s part of the family.

Photographed on an hot and humid summer morning, Bovari put on an enthusiastic display when turned out in his paddock, tearing off and bucking with Chase playing along behind him. Head shots required a bucket of feed, however. Always employing the art of the deal, Bovari steadfastly refused to pose until Casey shook the grain at him.