In more than 40 years at Glade Valley Farms in Frederick, Md., Mike Figgins has seen more horses than he can remember, and even more than he would ever care to count. But for the past 24 years, Figgins has watched the offspring of Foufa, now 30, leave an indelible mark on everyone associated with Glade Valley, for many years one of the premier breeding farms in the region. 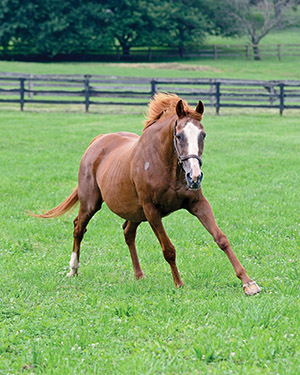 The modern-day history of the Thoroughbred nursery began with the late Jack Bender and Dr. Robert Leonard in the 1960s on land that had originally been farmed by European settlers in the mid-18th century. Bender’s son Howard and his wife Sondra (who passed away in February 2012) became partners in the farm, later racing their homebreds to prominence under the guidance of trainer Larry Murray.

Dr. Leonard purchased Foufa for $90,000 for the Benders at the 1989 Keeneland January Horses of All Ages sale while she was carrying her second foal, the Al Mamoon colt Maryland Moon. In Sondra Bender’s familiar black and gold silks, Maryland Moon was a multiple stakes winner who also finished second in the 1993 Washington D.C., International-G1 and earned $420,174.

“It was a very nice family; the kind of family that Doc looked for,” Murray explained. “She was a Storm Bird and her mother (Afifa, by Dewan) was a graded stakes winner; she won the (Grade 1) Vanity Handicap and equaled the track record. So there was a little paper there. Foufa’s been unbelievable. We’ve had five stakes winners out of her and now some of her daughters are producing.”

No one is more of an expert on Foufa’s progeny than Murray. Fourteen foals for the Benders, “and every one of them has been through this barn,” he said. All were very well-mannered, but all have also shared one common trait: a little hitch in their git-along. At first gimpy on the left hind, they always work out of it. But it’s so prevalent that many of Murray’s long-time exercise riders can immediately tell if they’re sitting on one of them. “They’ll ask ‘Is this a Foufa? Feels funny behind.’ And even her grandchildren do it. Now, how did that pass on?”

“I loved Foufa’s Warrior. He was a neat horse to be around. You’d love to just come in and see him every day because he was just like a person. When he won the Kent at Delaware, my dad was there. My dad didn’t come to many races because he lived in New York. But we were all at Rehoboth on vacation, and he and I rode up together that day and watched that race.”

Foufa’s Warrior added the 2004 Find Handicap to his resume, defeating Cherokee’s Boy. Although it was actually his final win, he remained in training until August 2009 when he retired at age 9 with a record of 39-4-7-12 and $555,920 earned. He’s now living in Virginia, and Murray still keeps tabs on him. “The girl that’s got him just sent me a video of him. He’s just starting to jump and he pops over like he loves it.”

Perhaps the most impressive of Foufa’s stats is that her five stakes winners were by five stallions from four sire lines. Two, Maryland Moon and Certantee, were from the In Reality line. Foufa’s Warrior was Mr. Prospector, Full Brush from Ack Ack, and Media Access descended from the Halo line. All five earned more than $200,000. In total, Foufa’s offspring earned the impressive sum of $2,065,848.

Her daughter Travelling (by Miswaki) is the dam of London Lane, winner of the Colonial Turf Cup Stakes-G2 at Colonial Downs in June. The son of Langfuhr paid $102.60 as the longest shot on the board and defeated Hyper, who went on to win the Grade 2 Bowling Green Handicap at Belmont Park.

Named Maryland’s Broodmare of the Year in 2003, Foufa now spends her days in a field with five other pensioned broodmares under Figgins’ watchful eye. Her pasture mates include Wide River, Sumwager, Delaware Handicap-G2 winner Green Darlin, Lavish Partner and Nashly. Surprisingly, she is not the oldest Glade Valley resident. That distinction belongs to Martie’s Double, the 34-year-old stakes-winning half-sister to Rollicking, once the farm’s top stallion.
Figgins?–?he is second-cousin to Ollie Figgins III, trainer of top filly Dance to Bristol?–?can trace the history of these mares back to Glade Valley’s heyday.

“Now when I first came here, we had Rollicking, Spring Double, Martins Rullah, Shelter Half, Solo Landing, several other stallions. And we kept our barren mares over there (motioning to a pasture in the distance, several football fields away).

“Come breeding season when they were palpated and ready to breed, you walked them from all the way over there to the breeding shed down here by the stud barn. When you got done breeding them, you walked them back. That was a hike. And if you found one that would let you ride her, you could ride one and lead one. But the only way you found out was the hard way.

“Those were the days, I mean to tell ya. This place was hoppin’.”

It’s quiet now. . . but Figgins’ tale seamlessly turns back time, to the once-bustling activity of the farm’s arcadian setting. Today, the training barn houses only a handful of horses, one being La Reine’s Terms, another Bender homebred who won 11 stakes, including the 2005 Maryland Million Turf at age 10, and earned $804,591. The farm’s only resident stallion, he covered just one mare this year.

Dr. Leonard is now retired and living on Maryland’s Eastern Shore, having sold all of his shares in the farm to Howard Bender. Foufa and her besties live full-time in a lush field with a huge run-in shed, coming in only when blacksmith or veterinary visits dictate.

Her photo op for this piece, however, was a special occasion. Figgins tended to the grand old mare’s preparation himself. “She was really cute this morning,” he smiled. “I ran a set of brushes over her, first time probably in a year. And she just stood there and ate it up.”