These days, the surname Napravnik is pretty much synonymous with Thoroughbred racing. But well before her younger sister Rosie was making constant headlines as a top jockey, Jasmine “Jazz” Napravnik was laying the groundwork for a career as a successful breeder, owner and trainer. And it’s thanks to 25-year-old Farah’s Moment that she has become all three. 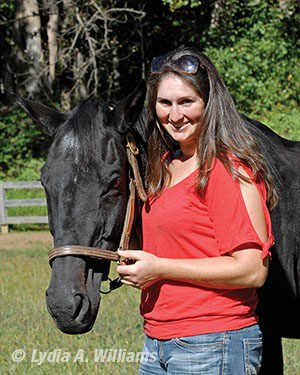 Having long outgrown her pony by age 13, Napravnik was in the market for a junior racehorse. Trainer Charlie Conaway Jr. happened to have one: a homebred mare his daughter Kelly had ridden in junior races. By Christopher R. out of the Better Arbitor mare Farah’s Image, Farah’s Moment made 43 starts from 1991 to ’96 at Charles Town and Delaware Park with what can at best be considered very modest success. By the time Conaway retired her at 8 in November 1996, she had put up stats of 6-3-4 and $15,493 earned.
Fortunately, she could jump. And it was through their pony racing contacts that she came to the attention of the Napravnik family.

“She was very special to me,” Jazz said. “I actually won my first race on her. And then I rode my very first timber race on her and won that.”

Some local eventing followed for a few years before 19-year-old Jazz decided she wanted to breed her mare. “I was on a very tight budget and I wanted to breed a horse I could steeplechase, so I needed a stallion that could jump. Plan B was that if it wasn’t fast enough to be a racehorse, I would make it an event horse because I was still eventing then.”
Jazz was working for Jack Fisher at the time and was fond of his timber champion Saluter, by Salutely. Scouring stallion directories, she came across Boy Done Good, another son of Salutely and the only Thoroughbred stallion competing in the advanced level in three-day eventing at the time. Shown under the name “Salute The Truth,” the 17-hand chestnut stands at Steuart Pittman’s Dodon Farm in Davidsonville, Md.

“Then I went and visited him at the Horse Expo in Timonium, and saw how cool he was with all that commotion going on. He was a very good looking horse, very athletic, great bone. And I didn’t know a thing about bloodlines. I knew what average folks know as far as serious breeding goes. But I knew that my mare could jump; I knew that he could jump and I knew he had–technically, in my mind–a half-brother who was a timber horse (Saluter).”

Date made, contract signed. Farah’s Moment foaled a chestnut filly on May 19, 2003. Named Farah T Salute, she made her first start as a 3-year-old for her breeder (running in the name of Napravnik’s Flying Horse Farm) in a maiden claimer at Colonial Downs on June 23, 2006. In the irons that day was Rosie Napravnik. She won. “And we were like ‘Oh wow–she’s a racehorse! Yay!’?” Jazz laughed.

She ran at 3, 4 and twice as a 5-year-old. “She just wasn’t into it as much, so I sent her to my mom to teach her to jump; she did a little eventing. She was just going really, really well. I had taken her foxhunting a couple of times. So we brought her out at 6. She won at a point-to-point but then we had a little trouble getting her going at a sanctioned meet; she was a little too rank on the front end. On the flat she had always been a closer, so I switched jocks and got her rated. Xavier Aizpuru rode her in her first start that fall at Middleburg and she was second in a photo. Then we took her to Aiken where Xav won on her, and then I got brave and bold and made the trip all the way to Palm Beach and she won the stake down there– the Palm Beach Filly and Mare Hurdle Stakes, again with Xav.”

Farah T Salute continued to be useful, picking up checks. At age 7 she won the Crown Royal Hurdle Stakes at Callaway Gardens (Pine Mountain, Ga.). Jazz thought about retiring her then, but the mare was going so well that she reconsidered. “So we brought her back the next year, and as a filly who really couldn’t compete with the allowance boys, the schedule was limited. She had three starts in the spring of her 8-year-old season, finishing seventh each time– lackluster efforts.”

That was enough to convince Jazz that it was time to take her horse home. But as it happened, 2011 was the first year that filly and mare steeplechase races were offered at Saratoga. . . and Jazz was pressured into running Farah T. “I said ‘OK, I’ll train her this summer and as long as she trains well I’ll go ahead and run her.’ She probably trained for me better than she had ever trained in her entire life.”

It was the Mrs. Ogden Phipps Stakes on August 11, 2011. Napravnik and Aizpuru felt pretty good about the way their mare came into the race. “She went to Saratoga, warmed up, circled, walked across the line, was great, turned in, stood–and stood. She got to the start and never left. Xav sat there and smacked her with the whip, and she just refused to move.”

The official chart states that “Farah T Salute completely refused at the start despite strong encouragement from the rider.”

“It wasn’t a laughing matter that day, but I can certainly laugh about it now. And from now on,” Jazz added, “I will not be pressured into running anything that I have retired!”

Faced with the prospect of breeding her stakes winner in the spring of 2012, Jazz did a bit more research. “I did some nicking, went and looked at a bunch of sires. A friend suggested Albert the Great, said he was absolutely awesome. I looked at his nicking with Farah T, went up and looked at him and said ‘OK, this is the sire.’ The day she was bred, looking at the two of them side by side, I thought ‘This is definitely the right choice.’?”

Meanwhile, Farah’s Moment was also about to come home. She had been given to a client of Jazz’s mother in Vermont eight years previously. When told those owners could no longer keep the mare, Jazz picked her up and brought her back home. She started riding her right away, as the owners had kept the mare in good condition. In October 2012, a friend was looking for a horse to take foxhunting. Farah’s Moment, then 24, answered the call.

A year later, Farah’s Moment is chilling out in a paddock in Monkton, Md., with her daughter Farah T Salute and her grandson, foaled this past March. Called “Connor,” the colt was co-bred by Jazz’s grandmother, Judith Freer. “We are hoping to get the name Gram Got Conned. My grandmother is a very non-horseperson, although she loves following my sister’s and my careers. When I asked her if she would put up the stud fee for me and she agreed, I just about hit the floor. We were laughing and joking and I said ‘I’ll just name it Gram Got Conned.’ Her maiden name is Connor, so she loved the idea. My breeding empire isn’t starting now. But Farah’s Moment will be my original foundation mare, and I would love to eventually expand and be able to have a nice line of homebreds.”