In his previous life he was known as Runnin Robbo. Bred in Kentucky by Tom Anuario, he is by turf warrior Fly Till Dawn out of the Pappa Steve mare Precious Pam. A quick scan of his lifetime past performances reveals there was very little actual “runnin” going on.

It took him 10 attempts to get to the winner’s circle–as a 5-year-old in 2001 at Philadelphia Park–and two starts later his career was over. That maiden-breaker was his only win. He hit the board on one other occasion in 12 races, retiring with earnings of $7,795. 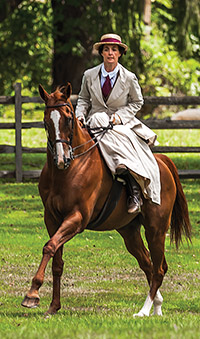 Owner Kevin Fields re-homed him to a family who rested his bowed tendon and tried to give him a new purpose, but the match proved less than ideal. It was then that Tracy Brennan entered the picture.
“He came into my life at a time when my previous Thoroughbred had EPM and was being pensioned. He fell into my lap and I thought maybe I can take him, put a couple of months training into him and then find him a good home. That was 10 years ago, and here he still is. We found that he truly was a jack of all trades.”

Brennan rechristened him Beau and began taking sidesaddle lessons on the 17-hand chestnut gelding. It was duck-to-water and before long they were giving clinics and performing demonstrations at nearby Fosterfields Living Historical Farm in Morristown, N.J. Brennan insists that Beau does not excel in any one genre but quickly points out that their temperaments are completely in synch for that very reason. “I don’t have the focus to stay with just one thing,” she said. “If something fun comes up, we give it a try.”

Plenty has come up over the years. Beau has been in the equitation ring, the dressage arena, the hunt field and, most recently, in jousting and games of skill. But despite Brennan’s modest disclaimer, she and Beau have indeed excelled in sidesaddle disciplines. While born out of necessity–Brennan’s injured knee made riding astride painful–Beau’s prowess and her love of its history have made sidesaddle their perfect endeavor.

While she makes many of her riding habits herself, one of her favorites was actually custom tailored for Mrs. Paul Mellon. Each of her saddles is close to 100 years old. And it’s that rich legacy that appeals most to the Pottstown, Pa., native. The wool-flocked saddles were made for a particular woman and a particular horse, and it was imperative that they fit perfectly. Demand for sidesaddles waned after World War II, and there are few master saddlers still practicing the craft.

“I do a lot of historical demonstrations, both mounted and unmounted, talking about sidesaddle. I talk about how it’s different and how it is safe. The saddle is built specifically to support us so we sit straight and square; we’re not hanging off the side of the horse. A lot of modifications were built into the sidesaddle to make them safe for horse and rider. Years back women riding sidesaddle didn’t have control; they truly sat sideways while somebody led them around. That version of women’s lib was wanting to face forward and take the reins into your own hands.”

One experience at Fosterfields led to yet another foray into a different equine discipline. Also in residence at the farm are what Tracy refers to as “very happy, very friendly cows.” Excited to see Beau one afternoon, the herd sped toward the fence en masse, and Beau blew a gasket. Since continued epic meltdowns were not an option, Brennan enlisted the help of Warren Curry, a gentleman who taught team penning and herding from his farm in Howell Township, N.J.

Brennan called Curry, who died in 2011, explained the situation. She also told him her horse was a Thoroughbred.

“Well, they’re not built for that, but you’ll have fun,” Curry said. “They should all know a little bit about everything.”

Brennan agreed, signed up for some lessons and eventually rode at Curry’s weekly team-penning competitions. The sight of the big, leggy gelding and the woman in the sidesaddle drew some skeptical glances at first, with most spectators adopting the NASCAR-ish “just waiting for the wreck” curiosity. In the end, they couldn’t help but leave impressed and appreciative when Brennan and her old racehorse got the job done.

This past fall, one of Brennan’s students rode Beau in a local schooling show. With little warm-up, they won the Jr. Equitation Division (astride). Another student had suffered a bad accident, and riding sidesaddle on Beau restored her confidence. “She rode him in her first show in years in a dressage test?–??sidesaddle. She now wants to buy one for her own horse. Beau has given many people their first sidesaddle experience.”

Tracy places strong emphasis on the fact Beau, now 17, was in no way a rescue situation. “He just needed a new career and a new home. Good connections–good quality people–are going to look to an organization like ReRun or Second Start to help get the word out. They’re not going to dump the horses in a sale and hope somebody rescues them.”

Brennan was able to track down original owner Kevin Fields from Beau’s Jockey Club paperwork, and the two have stayed in touch. Fields often forwards newspaper accounts of Beau’s demonstrations to his breeder, Anuario, and attended one such exhibition at Monmouth Park last summer.

Perhaps one of the more fascinating bullet items on Beau’s resume is the Tartan Day Parade in New York City. He and Brennan marched down Sixth Avenue preceded and followed by bagpipe bands. She credits his years on the racetrack?–?and his exposure to things like loudspeakers, crowds, excitement, etc.?–?for his cool nonchalance in such an unusual situation.

“Beau is so well-trained you can put a kid on him astride–and that’s more impressive than putting me on him in a sidesaddle. If I asked him to jump off a cliff, I think he would. He would just say ‘Mom, if you’re asking me to, it must be OK.’ He’s a good egg.”