Michelle Sperow Sharp can fill an afternoon talking about Snapfinger. That’s the kind of thing that tends to happen when you’ve owned a horse for 28 years. He’s become such a part of the fabric of her life–of her whole family’s life, really–that memories and anecdotes revolve around him. 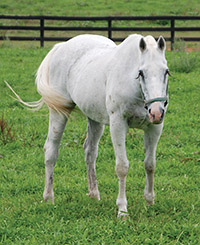 Listening to Sharp, you are immediately struck by the sense of pride she feels. And she should be proud; Snapfinger officially turned 33 on New Year’s Day. Now white as the driven snow, he was dark dappled gray when he came into Sharp’s life in 1986. A show rider since childhood, she was introduced to Snapfinger by Rodney Jenkins, who was just branching out into training for the races. “Rodney loved horse racing at Charles Town and would always try to find horses that fit there,” she said. “They had tried to make Snapfinger a steeplechase horse but it didn’t work.”

Unable to get the horse to run well, Jenkins shipped him to Sharp and she started to train him off of her family’s Sunny Ridge Farm in Martinsburg, W.Va. “It wasn’t going well; he was snorting, hard to deal with and just miserable,” she told. “I used to gallop him here at the farm in an overcheck. He was just so tough and so rank.” Jenkins suggested Sharp keep the gelding, and the pair agreed to a 60/40 deal with her as the majority partner. Sharp and then-husband Marc shared training duties.

The son of Northern Jove and Me Carla, by Gallant Romeo, was bred in Maryland by Robert and Nancy Leonard of Glade Valley Farm. His lifetime past performances are a fascinating read. This was a working-class, bread-and-butter campaigner who earned his $64,619 the hard way. A sprinter–“He was a speedball,” according to Sharp–Snapfinger ran for eight seasons, most often at Charles Town. And it was not unusual to see his name on the card three times in the same month. In 1989, he ran July 2, 12 and 17. He did the same in August, with three starts. All six outings earned him checks, including a win to his credit Aug. 23. And check the math: Snapfinger was 8 years old that summer.

Coming back in 1990 at 9, he showed little in five starts. “He was telling me he didn’t want to run anymore,” Sharp said, “and I listened to him.” He retired completely sound after inking a running line of 64-13-9-5.

“I’ll tell you a couple of really funny stories,” Sharp laughed. “Rodney Jenkins was NEVER in one of Snapfinger’s win photos. Not one. He really couldn’t stand Rodney; he’d smell his pipe and that was it. It’s been a long-standing joke and we’ve laughed about that for years. And here’s something else for you?–?Snapfinger absolutely loved mud, he was a front-runner, and whenever we gave him a mud tail, he won. Those are facts. “

Always a horse who wanted a job, Snapfinger was given plenty to do in his post-race career. Through friends and connections, Sharp found several free-lease situations for her horse over the years, always with the stipulation that he return to her. “He actually did the amateur jumpers at Upperville one year. He spent a year doing dressage. He foxhunted. He went to a girl who rode on the team at McDonogh School (in Maryland). I would go to visit him and on the way I’d stop and get him chocolate cake donuts from 7-Eleven, which he still loves.”

Clearly, Snapfinger is a chocoholic. Sharp relayed a hilarious incident from years ago involving a birthday cake that had been baked for a long-time groom. She would routinely ship breezers from her farm to Charles Town where she had a few stalls. On this morning, Snapfinger had worked and was patiently waiting in his stall to return home. The birthday cake–chocolate with chocolate icing–had been placed atop several bales of hay, safely out of harm’s way. Busy with the next set, Sharp and her groom were flabbergasted to return to the barn to find Snapfinger out of his stall with his face buried in the cake, munching blissfully. “That white face was covered with chocolate up to his eyes,” she said, “and to this day we still have no idea how he got out. We laughed so hard about it.”

Eventually Snapfinger became Sharp’s stable pony, spending winters at Tampa Bay Downs. “He came home one year and we noticed an arrhythmia, so we stopped riding him. I think the last time he went to Tampa with me was 2006 or 2007.” Which would have made him 25 or 26. This time, retirement stuck.

Snapfinger went home to 150-acre Sunny Ridge. “I grew up here on this farm with the horses, went to private school,” Sharp said. “My dad is a retired orthopedic surgeon, and this farm has been in his family for generations. He is now 89 and has Alzheimer’s, but he’s never forgotten Snapfinger. He still goes to the barn to see him.”

Another recent visitor was former jockey Lori Youngs Santmyer, who was frequently in the irons when Snapfinger ran. “I admit I used to be very ‘anti-girl rider’ but she got along with him like a house afire,” Sharp said. “And this horse did it the hard way; this was back in the day when there wasn’t much money at the track.” Santmyer recently moved to Texas, but she made sure to spend some time with her old partner before leaving.

The gelding has spent the past several years raising babies which, according to Sharp, is yet another task at which he excels. A particularly ornery Bop colt was turned out with the old guy who firmly but gently schooled the young’un in Behavior Modification 101. Still spry, Snapfinger enters every paddock bucking and kicking. He wears a Rambo rug all winter and comes in every night.

“He’s the pampered king of the farm,” said Sharp. “He mans the whole situation, and he monitors who comes and goes and where they go. And he was making sure he got his kisses and his treats from my mother tonight before he went to bed. We call him the Mayor of Sunny Ridge.’’

# Ann Donaldson 2014-01-07 01:14
Lovely story, one of many of Missy's equine accounts. Michelle(Missy) Sharpe needs to write us a book of horse tales!
Refresh comments list