Too Fast to Catch

JoAnn Hayden calls the mare the most amazing mother “ever.” Anita Motion uses the phrase, “the gift that keeps on giving.” By any description, one thing is certain: Too Fast to Catch is a gold mine of a broodmare. 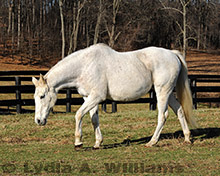 Hayden and Motion–and their husbands David and Graham–are well known to followers of Mid-Atlantic racing/breeding, but the mare they co-own lives on in retirement at the Haydens’ Dark Hollow Farm in Baltimore County, Md. She’s old, gray, pensioned and no doubt proud of the work of her son Eighttofasttocatch, who won four stakes in 2013 to pass $900,000 in career earnings. Now 26, Too Fast to Catch has earned her place of honor.

Bred in Florida by Ann Riley, the daughter of Nice Catch—Fast Chop, by Hatchet Man, was a decent racehorse, earning $109,180 with eight wins from 47 starts. Stakes-placed at 2, she spent the first two years of her career running primarily in New York claiming ranks in the barn of Rick Schosberg. From there she came to Maryland and ran for Eddie Gaudet, Frank Shenski and finally Michael Sterling before retiring in December 1992.

Owner David Hutchison bred her to Carnivalay in 1993. Her first foal, the filly Valay, showed nothing on the racetrack, earning $516 in 11 starts. Her second foal was an entirely different story. Lazy Lane Farms’ Storm Punch, by Two Punch, was an attention-grabber from the start, winning first out as a 2-year-old for a young, Laurel-based Graham Motion. At that time, the Haydens had Write Home in Motion’s barn and would venture to Laurel each weekend to see the horse train. And every week, the couple would watch their colt get dusted by Storm Punch.

“One day David said, ‘Who in the hell is that?’ ” JoAnn laughed. “Graham mentioned that he thought the breeder (Hutchison) had some mares for sale. So seeing how talented Storm Punch was, David was really interested.”Hutchison had on his farm at that time a filly owned by Hayden’s brother, so Hayden initiated the contact and went down to have a look. Noticing a flea-bitten gray mare in a nearby stall, he asked who she was. Hutchison told Hayden her name was Too Fast to Catch and that she had a “pretty good” 2-year-old training at Laurel.

“Now, I knew this but didn’t let on,” Hayden said. “I asked what he wanted for her.”

Hutchison said between eight and six (thousand). Hayden offered six. Hutchison countered at seven and they had a deal. Upon telling his trainer the story, Hayden sold Motion a half interest for $3,500. Too Fast to Catch had been bred that season to Not For Love, but was not in foal–or so they thought. Veterinarian Tom Bowman and his wife Chris were having dinner with the Haydens at Dark Hollow one evening, and David asked Bowman to have a look at the mare. Upon examination, Bowman discovered that the Haydens’ new acquisition was indeed pregnant to Not For Love.

In 1998, Too Fast to Catch dropped the first foal co-bred by Dark Hollow Farm and Herringswell Stables. “His name was Not for Me,” David said, “and we sold him for $50,000. We were standing in the back of the pavilion, and with every $5,000 increase Graham was poking me in the ribs.” Not for Me went on to win seven races and earn $172,647.

Hale and hardy throughout her long breeding career, Too Fast to Catch continued to bless the Haydens and Motions with tough foals who routinely turned into runners. Of the 11 horses bred by the partnership, 10 were winners. The only exception, the Broken Vow colt Matty My Boy, died after having an adverse reaction to a routine inoculation before making a start.

But the mare’s 2006 foal, Eighttofasttocatch, stamped her as one of the premiere producers in the region. The chestnut son of Not For Love was purchased by Arnold and Sylvia Heft for $47,000 at the Fasig-Tipton Midlantic Eastern Fall Yearling Sale in 2007. Trained from his first start by Tim Keefe, “Catcher” has become a recognizable favorite in Maryland racing. Since early 2011, the horse has churned out stakes earnings like an ATM machine. He won the last three renewals of Laurel’s Jennings Handicap; back-to-back runnings of the Harrison E. Johnson Stakes in 2011 and 2012; and triumphed in the Maryland Million Classic Stakes in 2011 and 2013. Last May, he was second to Last Gunfighter in the Grade 3 Pimlico Special and later wrapped up his season with three consecutive victories. Now 8, he is still in training with Keefe and is approaching millionaire status with earnings of $914,585 (through Jan. 5). 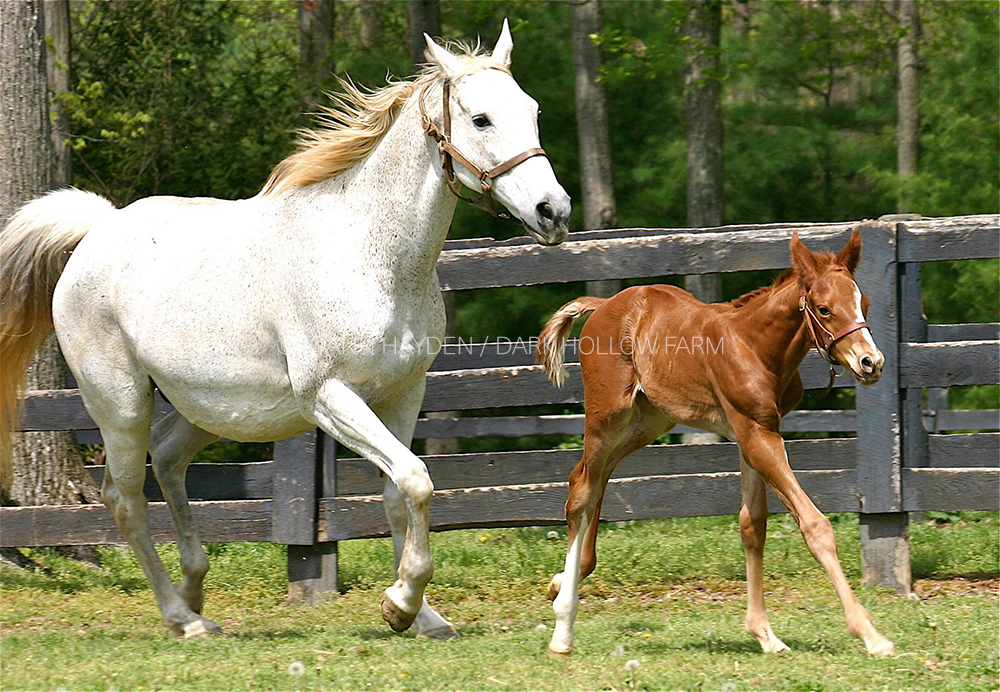 JoAnn Hayden regularly populates Dark Hollow’s Facebook page with Eighttofasttocatch updates, and after a recent victory she posted the following ode from Too Fast to Catch:
Thank you Tim, Thank you Eight.
Your latest stakes win was really great.
You are the gift that keeps on giving,
I think that’s why I keep on living!
You support me when I’m old and gray.
I thank you both on each new day.
With love,
Mom

The Haydens and Motions did keep a few of her foals to race: McKenzie Friend (a 2007 gelding by Domestic Dispute) and Bayonne (a 2008 filly by Dance With Ravens), but both were lost in the claim box. Bayonne went on to win Charles Town’s Pink Ribbon Stakes and $201,783 and was sold at the recent Keeneland January sale as a broodmare prospect. She’s coming back to Maryland after being purchased by Charles and Cynthia McGinnes’ Thornmar Farm for $65,000.

Too Fast to Catch bore her final (and 14th) foal in 2009–a colt by Bob and John named McNair and Adger. She was retired due to some nagging issues with internal and external melanoma.
“She was still fertile, but we stopped breeding her because of those tumors,” JoAnn said. “It just wasn’t safe anymore and we just didn’t want to take any chances with her. And we still take her temperature once a day and she’s fed twice a day, so we always know what’s going on with her.”

Anita Motion weighed in. “We relied on the Haydens to advise and make all the decisions, and they have very kindly retired her permanently at Dark Hollow. Too Fast to Catch has also been a way to cement our friendship with them over the years.”

She now spends her days with 24-year-old Glide Home, a dark bay gelding with a huge, kind eye and a Cyrano de Bergerac-esque bump on his left sinus cavity. “He won over $360,000 and never placed in a stake,” David said. “He’s by Caveat and is the first foal of Safe At the Plate (by Double Zeus). He was claimed by Dennis Drazin when he was about 5 or 6.”

JoAnn continued. “He called us and said his family would kill him if he lost the horse. They put him on a van and sent him right down here.”

It took years for the Haydens to find a pasture mate for Glide Home; playing well with others wasn’t his strong suit. Finally, he joined a field with Too Fast to Catch and his dam, Safe At the Plate–never one to suffer fools gladly. Glide Home straightened up, and his lonely days were over.

Last spring, they were joined by an unlikely visitor when a fawn was abandoned in their pasture. Probably born there, the tiny deer was unable to jump out of the diamond wire mesh-enclosed field. No matter, as “the most amazing mother ever” simply adopted him as her own. He never won a stakes, but he did grow up strong enough to jump that fence.