Celtic Choice is a horse with a great deal of family behind him. Not only is he half-brother to a Canadian Horse of the Year, but the 28-year-old Dumbarton Farm homebred has remained with the same connections throughout his long life. 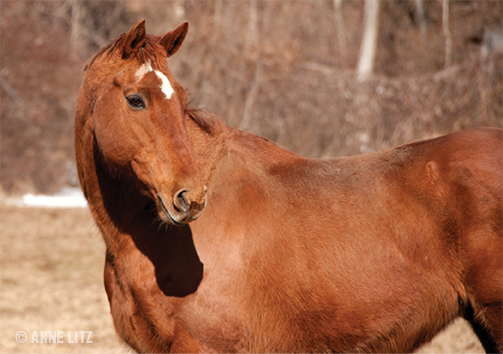 Don Litz has been aboard for the whole ride. His parents were close friends of Dumbarton owner James Keelty, now 93. "In the mid-1980s Mr. Keelty wanted to get into the horse business. He went to dinner with my father and me one night, and that's when the whole thing started."

It started with a bang when Litz recommended that Keelty purchase the Barachois mare Your My Choice in Kentucky in 1984. At that time, her 2-year-old son by Gregorian, Imperial Choice, was beginning to turn heads at Woodbine.

"I knew she had a 2-year-old in Canada but I didn't know anything about him," Litz said. "Well, he ended up being Imperial Choice–1985 Horse of the Year, champion grass horse and champion 3-year-old colt. He was a hugely successful horse. And then her next foal was Golden Choice, another top Canadian 3-year-old. So she had a tremendous career as a broodmare."

Imperial Choice won eight of 13 lifetime starts and earned $586,628 in addition to his Sovereign Awards. His year-younger half-brother Golden Choice, by Val de l'Orne (Fr), was also a Sovereign Award winner at 3, and a graded stakes winner of $504,674. Both were bred by the legendary E.P. Taylor.

Sent by Keelty and Litz to Caveat in 1985, Your My Choice delivered Celtic Choice in Maryland on May 7, 1986. Litz was then manager of Sagamore Farm, where the horse was broken by Joe Crowley before being sent to the barn of Ben Perkins Jr. And Celtic Choice remained quintessentially Maryland, running at Pimlico and Laurel Park for six seasons with the occasional foray to Calder, Gulfstream Park or Monmouth Park. Later in his career he was transferred to the barn of Jimmy Murphy. Celtic Choice was "sound as a bell," durable and ran frequently. Most were claiming events, but his record of 64-9-5-10 does include four wins in allowance company.

After ending his career on the flat with $139,910 earned, Celtic Choice was sent briefly to trainer Jack Fisher for an attempt over jumps in the fall of 1994. Fifth on the flat at Great Meadow, he finished fourth in his only steeplechase start, at Montpelier.

"Jack said he really thought Celtic had a lot of talent, but he was a bleeder," said Litz and at the time the National Steeplechase Association did not allow the use of Lasix. "We just decided to retire him and keep him for the rest of his days."

Celtic Choice went home to the Litz family's 30-acre Seven Dots Farm in Sparks, Md., and became a foxhunter for wife Taffy and daughter Anne. According to Taffy, the chestnut was a quick study who immediately absorbed his new job.

"Mom could teach beginners off of him for years," said Anne. "He was happy and well behaved behind mom's horse, if the student was soft and did not pull on him. But if anyone got on him and decided they were going to show him how to do something, he would drop them. He knew what he was doing and was only going to do it his way."

Anne was still in high school when Celtic Choice joined the herd at home. Taffy was schooling another young horse, so the off-the-track newcomer became Anne's mount. "He was really the first horse I had had that was not first my mom's," she said.

Hunter trials and foxhunting with Green Spring Hounds followed. He was always steady and rock solid but preferred to stay attached to another horse, never wanting to take the lead over a fence. He'd buddy-up with whoever trailered to the event with him or, as Anne put it, one that he picked at the start of the hunt.

"This was a horse with so much class, and he'd do anything you asked him to do," said Don. "Celtic was never mean, but you couldn't manipulate him. He would do it his way. I rode him and jumped him a little bit. He was always good to me; he was good to my children."

And he's been about as low-maintenance as a horse can get. Good coat, easy keeper, perfect feet that don't require shoes. Even at his advanced age he's still playing an important role on the farm–babysitting newly weaned foals.

"When I first wean, I have the mares and foals in their stalls, and Celtic comes into the barn," Don said. "Then I take the mares out and put Celtic in a stall between them. Sometimes I'll even put him in a stall with them, just to calm them. And then I'll take them out without their mothers; they'll cry a little bit. But he's really cool, a real comfort to these young, just-weaned foals. You'll see them out there sleeping on the ground and he's standing over them." 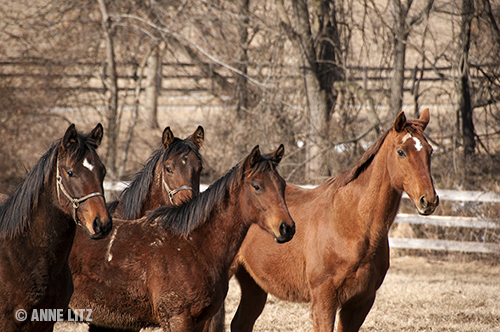 It's a job Celtic Choice takes seriously. For most months of the year, he lives in a field with barren mares and donkeys. Usually content to be low man on that totem pole, his persona changes completely when he's taken from that field and brought down the hill into the barn with the babies.

"He plays a fatherly/motherly role, quick to correct their antics but never with more than a nip and pinned ears," Anne said. "The foals learn to respect him and also completely love him. They go where he goes in the field. Sleep where he sleeps, walk where he walks."

The entire family marvels at the athleticism Celtic Choice still shows. "It is amazing to see him gallop up to feeding time and leave those babies in the dust," Anne said. "You can still see his spirit each and every day. Celtic is the most coordinated old man I know."