Details
From May 2014 Issue
Written by Maggie Kimmitt

Wells Hanna rides Dirty. He’s well known for it, in fact; has been doing it for years. And normally when you see the pair, Hanna is clad in green velvet Colonial garb, perfectly balancing a 5-foot wooden spear as his horse Dirty Bird speeds toward a 2-inch plastic ring suspended from an L-shaped pole. 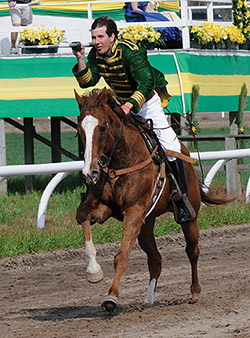 For the past eight years, Hanna and the chestnut gelding have been members of the Cedar Swamp Lancers in Kingstree, S.C. The organization practices the time-honored tradition of “ring tournaments,” a popular fixture of antebellum life in South Carolina since the 1850s. It’s a far cry from the pair’s original meeting 15 years ago.

While in his early 20s, Hanna worked as an exercise rider for trainer R.B. “Bobby” McCutchen, owner of McCutchen Training Center in Kingstree.
“His son [Jason] and I went to school together,” Hanna said. “When we were young, we loved the races. I grew up going to Elloree Training Center with them when I was in high school. I used to gallop horses just for the fun of it; that’s how it started. Then Jason and I would take horses to the track for Bobby. We’d spend winters in Maryland. We stayed at Timonium and Bowie for a long time, and then went to Colonial Downs when that opened.”

Hanna still remembers the day in September 1999 when Bobby McCutchen returned from Keeneland with an eye-catching, flashy yearling.
“He was a big, pretty colt and Bobby really liked him.”

Named Dancininthestreet, the son of Citidancer and the Timeless Moment mare Persona Grata was bred in Maryland by Charlie Noell. Persona Grata was already the dam of Gordy’s Our Man, a durable Kyle’s Our Man gelding who went on to earn $276,129 in 77 career starts.

McCutchen was the winning bidder at $5,700, and Dancininthestreet headed to Kingstree.

“Jason and I broke him as a yearling,” Hanna said. “I remember him well; he was just an easy horse to ride. But he was big and goofy and it took him a little while to come around. He wasn’t going to be a [fast-developing] 2-year-old, so we gelded him, turned him out and brought him back at 3. And he was just one of those horses that always came up with a problem. He never had surgery, but he would always have something keep him from starting. He had a little knee issue. But we did actually get him to Keeneland and he was training well. Then just as we had him about ready to start, he bowed a tendon. So then Bobby decided it wasn’t worth it and we quit with him.”

Back on the farm, the horse was gradually let down and turned out with a small group of broodmares. It didn’t go well. The girls picked on him mercilessly, constantly running him off from the feed bucket. After a few days, it became obvious the arrangement wasn’t going to work.

McCutchen thought he’d found the horse a home with some dressage riders, but they returned him, declaring him not a good enough mover for the purpose. Hanna had always liked the horse, so he approached McCutchen and offered to buy him, planning to take him home and keep him as a trail horse. Hanna had given up galloping and traveling at about the same time, remaining in Kingstree to take over his father’s business, Williamsburg Feed and Tack.

“I knew I didn’t want to call him Dancininthestreet,” Hanna said. “And I don’t know what happened, but you know how horses kind of name themselves? Before you even name a 2-year-old, you kind of mess with them a while and sometimes a name will come to you. He just looked so pitiful; I hate to say it. I went to get him out of the pasture and those broodmares had been roughing him up. He was so dirty and muddy. And Dirty Bird just came out of my mouth, and that stuck with him.”

A few years later, Hanna was approached by longtime friend Alton Brown, a driving force behind the Cedar Swamp Lancers, which actively recruits new members. Hanna took Dirty Bird out to a practice field and introduced him to the lance, the poles, the rings–all very slowly.

“It takes quite a bit of walking. When I started my horse I walked through it I can’t tell you how many times before I even let him jog or gallop through it just to get him used to it. Most people don’t have the patience.”

Hanna did–and the now 16-year-old Dirty Bird found his calling. The Cedar Swamp group is comprised entirely of riders from the Kingstree area of Williamsburg County, S.C. Though small in number, they take the tradition seriously and conduct their tournaments according to rules drafted generations ago.

The field of play is a firm turf or sand clay strip, long enough to afford enough space for a 75-yard timed run. It consists of a starting post and three ring posts, each spaced 25 yards apart. The 9-foot high ring posts are usually made of pipe, are base-mounted and heavy enough to support a 7-foot L-shaped arm which extends from the pipe at a right angle to the track. From that arm hang white plastic rings, 2 inches in diameter.

Riders have six seconds to complete each pass through the three posts, from starting post through the last ring. Each rider is allowed three passes in tournament competition. As such, a perfect score is nine rings. In the event of ties between riders, run-offs are held, decreasing the size of the rings to 1 1/4 inches. Should the tie still remain, the rings are reduced even more and referred to as wedding bands.

The primary contrast between Southern lancing tournaments and more contemporary jousting competitions are the period costumes and the dedication to Colonial customs. Hanna competes in a dark green velvet military-style waistcoat with gold trim and epaulets, donning a feathered tricorn hat in the tournament’s opening procession and presentation of colors. His heart pine lance weighs close to 15 pounds and is estimated to be 60 years old.

“You want the lance to be heavy,” he explained, “You’re running so fast, you want it to keep still.”

The Cedar Swamp Lancers hold tournaments at festivals in the spring and fall. While prizes are modest and no money is earned, bragging rights are hotly contested, and a perpetual trophy is awarded at the fall event.

Each competition has an announcer, and riders are introduced formally and distinctly, with gentlemen called Knights. They are identified by their area of residence; Hanna is the Knight of Williamsburg.

Before each of his passes, for instance, the announcer will call, “Wells Hanna, Knight of Williamsburg. Charge, Sir Knight.”

During an exhibition at the Elloree Trials in March, Dirty Bird took that directive a bit too literally.

Back on a racetrack for the first time in 13 years, Dirty Bird was sharp, and blazed down the Elloree stretch. The crowd loved it. Hanna was motionless, lance perfectly balanced near his right shoulder with his left hand maintaining a feather-light but steady contact with his horse?–?who promptly sped past all the rings on his second pass.

“You want them to go fast because that keeps your lance steady, but you don’t want them running down there about 40 miles an hour,” Hanna said. “I tried to hold him back once, but he threw his head up in the air and I finally said ‘Heck with it.’ I just let him go and he was cruising along pretty good. I think he was having flashbacks.