Details
From May 2014 Issue
Written by Maggie Kimmitt

Between 1999 and 2001, Unexplainable was practically a household name at Parx Racing. Not only was the Adena Springs-bred son of El Prado (Ire)—Brilliant Prospect, by Marine Brass, popular with the betting public, he was a hot commodity in the claim box as well. Every one of his 10 lifetime wins came at the Bensalem, Pa., oval, then still called Philadelphia Park.

Kate Demasi trained the gray for Pewter Stable II and Steve Viola. He began his career at 3 in 1999, breaking his maiden in his sixth start. He made 14 starts that season, with Phil Aristone claiming him out of a winning effort for new owner Leonard Klinghoffer on Nov. 23 at Parx. Demasi and Pewter Stable II LLC dropped the slip for him five months later in April 2000. Five wins and a year and a half later, those connections lost him again, this time to trainer Andrea Gonzalez and Diamante Racing Stable. Gonzalez ran him back eight days after the claim and won with him on Nov. 26, 2001, as the gelding scored by 12 1/2 lengths. 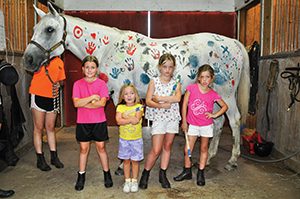 Unexplainable changed hands yet again in his next start three weeks later and headed to the barn of Keith LeBarron for owner Susan LeBarron. He finished no better than seventh in his two starts for them, and made his last appearance at Parx Jan. 25, 2002.
About six months later, Betsy Burke Parker received a phone call from a friend of a friend in New Jersey. “She’d had feelers out for a prospect for her kids for pony club. They had Unexplainable, said he was a real handful and they were scared of him, so they kept him for about a week and said ‘We can’t do this.’?”
Parker tried him and immediately loved the horse despite the fact that he attempted–unsuccessfully–to buck her off the first time she got on him.
“No wonder they were scared of him,” she said. “But right away I called my chiropractor/acupuncture guy. I said ‘You know what, that isn’t behavioral, that’s pain.’ So I took him to my guy and it was like click, click, click. It wasn’t quite ‘Eureka!’ but it was close, and he has never done that again.”
Parker owns and operates 40-acre Hunter’s Rest in Flint Hill, Va. The Tennessee native, whose mother was an “A” Pony Clubber and father a former steeplechase jockey and trainer, offers “dive in packages” to riders interested in foxhunting.
“I offer every level of introduction to foxhunting up to boarding and training staff horses and staff members. Mostly my best value is the introduction to the foxhunting field. I give people a taste of the sport and then they realize whether they do or do not want to pursue it. Foxhunting is on so many people’s bucket list. There’s not anyplace you can go and get a few lessons on how to ride in the foxhunting field, how to do the basic manner and rules on a safe, made, gentle hunter that is not going to kill you, and go with people like me who will tuck you under their wing and teach you how to foxhunt.”
Unexplainable–whom Parker calls “X”–was a perfect fit from the start.
“I thought I had died and gone to heaven with this horse. The first time I got on him, I would have hunted him that day.”
Field master for the Old Dominion Hounds in Flint Hill, Parker was also a licensed steeplechase trainer and jockey. “They had given me his papers and I had jump horses, so I figured heck, why not? I rode him and hunted him a bit, taught him to jump. He’s a super jumper; he’s quick, he was sound, he was healthy.”
Unexplainable won his first start over fences in a point-to-point in the fall of 2005, finished fourth in a maiden hurdle race at Middleburg, then displaced in his only other National Steeplechase Association start. “He had already proven his worth at that point. He’d already proven how kind–saintly–he was, good movement, solid character, athletic but with a great attitude and a forgiving disposition,” said Parker, who took him home to Hunter’s Rest and assimilated him into the program. Racing career officially concluded, Unexplainable’s record was 44-10-8-4 with earnings of $87,815.
Parker’s weekend retreats offer patrons more than the opportunity to ride to hounds.
“It’s definitely not a four-poster bed facility, but I’ve got plenty of spare rooms and lots of energy and time to teach somebody the whole routine, including kennel visits, we go to Horse Country Saddlery, the National Sporting Library, the point-to-points, the hound shows. But the main reason it’s so cool is because of these horses.”
And Parker is quick to point out that X is easily her favorite among the 20 equines on the farm. She began putting students on him, at first more advanced students to perfect their jumping and cross-country riding/galloping skills, but less and less experienced riders began to ride him as he showed he could handle any skill set. Parker estimates he’s taught more than 50 first-time riders, hundreds of students, and given more than 30 people their starts in the hunt field. He’s hunted with packs of hounds from northern Virginia to South Carolina.
“I do a lower level summer camp, and there are three different stables within five miles of here that have fun shows. My tolerance for horse showing is pretty low, so if I have to go to one I’ll only go to those three. They also have judged pleasure rides around here; they’re cool and I’ll go pretty far for those. It’s a 12-mile course and you ride it at your own leisure. And every mile they’ll have a different judge with a different obstacle–like crossing a tarp, backing up in an L shape, dragging a branch off the trail, getting a drink off a tray that someone is holding for you and drinking it. X has won those.”
X is especially beloved by the young riders who attend Hunter’s Rest’s summer camps. He’s the model “canvas” for anatomy lessons, and on a particularly creative occasion served as a wall on which several campers painted graffiti. “I told the girls to look all tough and cool after they’d finished painting him,” Parker laughed.
“It’s pretty hard not to like a horse like him,” she went on. “When I’m an old lady on my front porch rocking in my chair and reminiscing about all the good horses I’ve had in my life, this horse will be at the top of the list.”