In reality, they are a study in contrasts. Jade’s Revenge is a tall, patrician bay, expressive, approachable. He’s the stuff of horse-crazy young girls’ dreams. Monarch Lane, a welterweight chestnut, doesn’t care why you’ve come and has no interest in exchanging pleasantries. No warm fuzziness there; he’s all business. Extend your hand at your own peril. 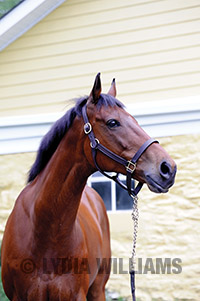 On paper, they’re more kindred. Both are Kentucky-bred black type earners who spent time in the care of A-List trainers during their racing careers. Their lifetime past performances show starts at Gulfstream Park, Keeneland and Saratoga under household names Dominguez, Velazquez, Prado, Desormeaux.

But most importantly, both hit the Thoroughbred retirement jackpot when they ended up with Charlie and Sherry Fenwick at their 200-acre Gone To Ground Farm in Upperco, Md.

Monarch Lane (Maria’s Mon—Surprising Fact, by Known Fact) was bred by G. Watts Humphrey and W.S. Farish. Trained by Todd Pletcher, he carried the colors of Edgewood Farm in his four starts on the flat. He broke his maiden at first asking at Gulfstream at 3 in 2005, was third in allowance company in his next start and from there stepped right up into the Illinois Derby-G2, finishing second to Greeley’s Galaxy.

“People were excited by that. The plan had been to run in the Kentucky Derby but he was not among the top 20 money-winning horses,” Charlie Fenwick explained.

Shelved until January 2006, he came back in a first-level allowance and won again.

“He ended up breaking a bone in his knee and now has four terrible-looking screws in it. They didn’t want him to ever run again on the flat.”

Now 12, Monarch Lane originally came to Fenwick’s attention when he ended up at the farm of his brother, Bruce Fenwick. The horse had been given to Mona DeVivo, a family friend who was looking for a foxhunter. DeVivo originally kept him at the Green Spring Hounds, but that didn’t work when he turned out to be, as Sherry Fenwick put it, “a bit more than they wanted to have around.”

Charlie took over, “Let me tell you how I found Monarch Lane. . .”

It was Thanksgiving Day 2009 and the former amateur steeplechase jockey was driving home from a day’s foxhunting at Bruce’s farm adjacent to the Maryland Hunt Cup course. Around the corner on Butler Road, Charlie saw two sets of hoofprints going away from the hunt club.

“That’s strange, I don’t think we ever came over this way,” Charlie thought as he pondered the horseshoe scars on the blacktop. Then he got to Jack Fisher’s place and the tracks stopped.
At dinner that night, Charlie told Bruce about the discovery and got a ready explanation. 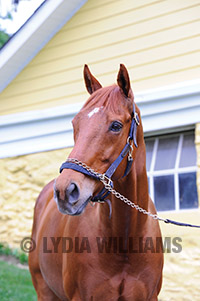 “Oh, that’s my horse,” Bruce said. “The hunt came through this afternoon and this crazy horse of Mona’s jumped out and took another horse with him. They ran down Belmont Road, turned right on Butler Road and they have to have galloped five miles right down the center of the road. They ended up at a neighbor’s place. That horse of Mona’s, he’s tough. He was very talented at one point, but he’s a real pain in the ass to deal with.”

That and the story of the Illinois Derby was enough to intrigue Charlie, who had the free time and the free space to take on a new project. All involved agreed that the horse was entirely too much for DeVivo, and just like that, Monarch Lane found a new home.

Charlie worked with the gelding constantly and hunted him for a year before running him over timber. “That wasn’t so successful,” he said. “I can handle him and foxhunt him because I’ve gotten to know him pretty well and I’m a strong rider. But he’s not gonna settle behind five or six horses and jump 15 fences.”

Not that Monarch Lane didn’t get a chance. He made nine starts over timber and on the flat in point-to-points and steeplechase meets, winning once over timber (at Potomac in 2010) and once on the flat (at Willowdale 2009). In his only sanctioned timber start, he pulled up at Fair Hill in 2010. With Charlie aboard, Monarch Lane was on the winning team at the Foxhall Team Chase in 2012–leading throughout, of course.

“He goes through cycles, I’ll say that,” Charlie said. “Sometimes he’ll be very docile, but you can’t turn him out with another horse because he might savage the other horse. He is tough, there is no two ways about it, and you have to be very careful around him. But I enjoy him. I’ve had him all these years, I hunt him regularly. He’ll hunt for four hours, and he gets tougher as the day goes on too. I’m sort of glad I didn’t get him when I was younger, because I would have tried to make him into a timber horse, and both of us might have gotten hurt. When you get on his back, he is absolutely fearless and I enjoy riding him. I know that I’m on a good horse when I’m on him. It’s a lot of fun.”

“He’s not a bad ride, but he’s miserable on the ground,” she said. “He’s been cranky and angry the whole time he’s been here. And he gives nothing back; nada. He just continues to take from you.”

Jade’s Revenge, on the other hand, brought Sherry back to horses.

A cycle of personal losses had left her feeling adrift, and she considered giving up riding. The Middleburg, Va., native grew up in the saddle–“my heart is with steeplechase horses”–and spent several years working for Jonathan Sheppard. During that time she formed a deep bond and close friendship with Sheppard assistant Betsy Wells, who passed away from cancer in 2006.

“Around the time Betsy died, things had just changed. And then [retired Maryland Hunt Cup winner] Buck Jakes died a few years later. Too much tragedy. I needed to focus. I felt like all those friendships–those people you have such a life with in our horse world–I realized I didn’t want to lose touch with that. So I called Graham and Anita Motion. I knew I needed a horse that was coming off the track and didn’t know anything.”

The Motions had just such a horse. Jade’s Revenge was bred and owned by Falls Church Racing Stables, headed by Brent Johnson of Better Talk Now fame. Foaled in 2003, the son of Quiet American—Valnesian, by Valid Appeal, won Keeneland’s Ben Ali Stakes-G3 and earned $413,128 by the time he retired with eight wins and 25 top-three finishes from 40 starts.

He was a 7-year-old (and still an entire horse) closing out his career when Sherry and Charlie Fenwick went to Saratoga to watch him run in the John’s Call Stakes in August 2010. Jade’s Revenge finished last of 12, and soon joined the Fenwick team.
Sherry had him gelded, brought him home briefly and then sent him to friend and trainer Billy Santoro for re-education. Watching him school over fences one day, Sherry knew he was exactly what she’d hoped to find.

“He was just so beautiful and wonderful over jumps. He took to this life really well; he loves it. And he and I are at the same point in our lives. . . we like to go out and play, we like to hunt when we want, we like to fool around when we want, we’re not going to push anything, we respect each other. I’m a Christmas and New Year’s foxhunter?–?nothing like what Charlie does.”

One adjective is oft repeated when Sherry discusses Jade: “perfect.” He’s the perfect size, the perfect body type, the perfect temperament–the anti-Monarch Lane (to her).

Farm foreman Stephee Smith is grateful to have a Jade’s Revenge to balance out Monarch Lane. She and Sherry have known each other for more than 35 years. When Smith contacted Sherry a few years ago and expressed interest in finding a job and a place to live in Maryland, Sherry jumped on the opportunity and offered her the position. The Fenwicks had just sold their farm on Butler Road in Butler and relocated to their current property, which was formerly owned by the late Hugh and Achsah O’Donovan.

“We had just moved out of the Butler Road farm and had nothing going on up here,” Sherry said. “We had nobody to help us. And she’s so wonderful. . . so devoted to the horses. She’s a kind soul to deal with Monarch the way she does, and she gives all of these horses the best life possible.”

Two other former Motion runners, Jade’s Revenge’s unraced younger half-brother Torpedo of Truth and Old Master Expert (GB) (who goes by “Art”), are part of the group as well.

“I love all of them, I do,” said Sherry. “Jade, Monarch. . . all of them. We are just so lucky to be able to give a life to these horses. They’re fantastic.”