Tom Voss sat on a chair outside the tack room at his Saratoga barn. A few feet away, 2010 champion steeplechaser Slip Away stood getting his feet done, rider Paddy Young holding the shank and scratching the big gray's nose. Voss has one of those shedrows in which everyone is usually someone. Not too many unfamiliar names taped to the stall doors. 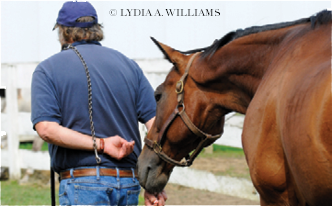 On this day, however, the topic of conversation was no one of the current stable stars but the barn pony. A winner on the flat and over jumps, The Looper had some pretty imposing shoes to fill as immediate successor to Voss's near-legendary John's Call.

Bred and owned by Mill House, The Looper is a bay son of Labeeb (GB) from the Topsider mare Pigeon Pea. Foaled in Kentucky in April 2000 and trained on the flat by Neil Howard, the gelding took 11 starts to win, in a 2004 Fair Grounds maiden special weight on turf under Robby Albarado.

"I love Loopie!" she said. "The first time we ran him on the grass, he dropped his head and ate Churchill's turf course when loading in the gate. Loopie," she emphasized, "was full of awesomeness."

It was a sentiment clearly shared by his owners, who protected The Looper from the claim box throughout his career. Two more allowance wins followed in 2004 before the Mill House connections decided to send their homebred to Voss early in 2005 to try him over jumps. Voss called The Looper "sort of disappointing" in his first few starts at Atlantic City and Fair Hill. But with a change of rider (to Rob Massey) and a switch back to the "flatter and faster flat tracks"?–?Colonial and Saratoga?–?The Looper got his groove back and he won three straight.

A bowed tendon after that Saratoga meet in 2005 sent the horse to the sidelines until April 2007. Every start from that point was in graded stakes company, with Cyril Murphy aboard for all five trips.

"I remember his last race like it was yesterday," Voss said, shaking his head at the thought. "That was a Grade 1 at Belmont [the Lonesome Glory Hurdle Stakes in September 2007]. He was gonna win that race. . . and Cyril somehow got left and fell off the back of the horse. It's the honest-to-God truth."

The Looper headed back to Voss's Atlanta Hall Farm in Monkton, Md., this time for good. Voss toyed with the idea of turning him into a timber horse but liked the gelding too much to risk it. Mill House had, at that point, given the horse to Voss, secure in the knowledge that he would have the best possible home with his trainer.

The Looper settled into life as a foxhunter. "Such a good hunter. . . the best hunter you ever saw in your life," Voss said.

When John's Call was euthanized after breaking his right foreleg in a paddock accident in February 2010, The Looper was pressed into service as the barn's lead pony. It was a daunting prospect. John's Call had been a beloved fixture on the Saratoga scene. In 2000, at age 9, he'd become the oldest horse to capture a Grade 1 at Saratoga by winning the Sword Dancer Invitational. He notched another Grade 1 in Belmont Park's Turf Classic Invitational and then finished third in the Breeders' Cup Turf-G1 that fall. His stature prompted the New York Racing Association to debut the John's Call Stakes, at a mile and five-eighths on the turf, in 2004.

As a lead pony, The Looper seems to have outdone his splendid predecessor. "Both of them were very good; they had that great disposition," Voss said. "He might be a little better than John. John could get a little woke-up sometimes, and you could never get near the gate with John's Call. He'd get real racy. But if you're looking for a foolproof pony, it's this one.

"Come with me to this paddock over here and let me show you what he does."

Asking staff member Kristin Fischer to hand him a peppermint, Voss paused for a moment and contemplated the terrier who had been rooted at his feet throughout the conversation. "This dog hasn't moved here in the last 15 minutes. I'm not sure why. It's like he's stuffed. Well, he is 16. Anyway. . . come on and see this horse."

Approaching the paddock, it took only a monosyllabic "hey" from Voss for The Looper to raise his head, nicker enthusiastically and march toward the fence. Without another word, Voss opened the gate, turned and began to head back toward his barn, crinkling the peppermint wrapper as he went. The Looper sauntered, tail-swishing flies, and fell in line directly behind Voss, who by then held the unwrapped peppermint in an open hand behind his back.

Past the Ken McPeek and Seth Benzel shedrows, the pair ambled like a boy and his pet Labrador on a summer stroll. As The Looper willingly entered his stall, hopeful for a welcome surprise in his feed tub, Voss settled back in a chair.