Grady. It’s a simple name: masculine, rugged, strong. It sounds like a good name for a boxer. . . a ranch hand. . . a longshoreman. Or a racehorse who made 104 starts and ran until he was 11 years old. 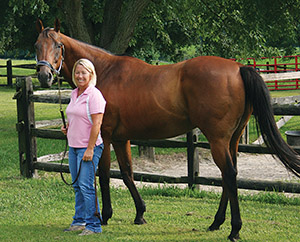 Now 19, Grady is still one tough hombre. And according to owner Andi Puckett, it’s always been that way.

The son of Prospectors Gamble—Peta-dear, by Subpet, was bred by Hart Farm in Florida but began his career at Hollywood Park as a precocious 2-year-old for owners Irish American Thoroughbreds and O’Leary’s Irish Farms. Trained by Randy Bradshaw, Grady broke his maiden in his third start on Aug. 24, 1997, at Santa Fe, winning the Indian Nations Futurity Cup which offered an impressive purse of $571,647. Not only did he bank $274,396 that day, but finishing 2 3/4 lengths behind him in third was eventual 1998 Kentucky Derby and Preakness winner Real Quiet.

The horse’s lifetime past performance chart has a distinct “George Washington Slept Here” quality. He was all over Southern California from 1997 to 2000, as claims shuttled him from Bradshaw through the barns of Jenine Sahadi, Mike Mitchell, Bob Hess and Peter Eurton. Hess claimed him back for owner Roddy Valente in November 2000 and a month later Grady won the Albany Handicap at Golden Gate Fields for his new connections. It would be his last start on the West Coast.

Valente sent him to the barn of Bruce Levine in New York at the beginning of 2001. Grady was consistently competitive in allowance and claiming company for the pair throughout that year. After a brief freshening in early 2002, Valente sent him to trainer Ron Dandy at Suffolk Downs.

“I rode up at Suffolk during the mid 1980s and knew Ron; he was a good horseman,” Puckett said. “When we looked to claim Grady, he hadn’t been running great but I knew Ron wouldn’t have beat him up. I wanted him mostly because of his past. Here was a classy old gelding, and I vowed that day that I would get him and I would retire him one day. He wasn’t saying he needed to be retired at all at that time. He was sound, he loved what he did. He was 100 percent racehorse.”

Puckett claimed him from Dandy and Valente at Laurel Park on Dec. 4, 2003. With husband Dwight as trainer, Grady ran in the name of their Pilot’s Cove Farm.

“When we got him he was just a cantankerous old man,” Andi said. “I would gallop him and the only time he really got worked up was when he knew we were going to work. We put blinkers on him and he would just jig-jog, back up, gallop sideways to the pole. It was just ridiculous for an old horse who had run so many times. And then I would break him off and he wouldn’t go anywhere. If there wasn’t a horse in front of him to run at he just kind of spit it, and I would wonder if I could get him out of a two-minute lick. But once he spotted somebody out front, then he would just take off.”

He was solid and useful for them at the Maryland tracks, but in May 2004, at age 9, he again became a commodity in the claim box. He bounced through barns a few times before the Pucketts were able to claim him back, lose him again, and eventually get him back for good.

One of the first things Andi did after bringing the gelding home was contact several of his previous trainers and owners.

“I actually talked to Randy Bradshaw after I retired him. He was very grateful; we laughed out loud about him and he said ‘Oh I loved that horse.’ We talked about the Indian Nations Futurity. Randy said Grady had dropped the rider the day before, got loose during the post parade. He said he was all over the place, out of control during the first part of that race; tried to bolt. I said ‘Well you know, he hasn’t really changed much.’ ”

The Washington Thoroughbred Breeders and Owners Association published an article about Grady not long after his career ended. The editor contacted Andi and informed her that the horse’s original owners had gotten in touch in an effort to track him down.

“The editor asked if she could give them my email. They were in Texas, so I sent photos. They had been frantic because he had fallen off their radar and they didn’t know what happened to him. They ended up flying up to visit. We’re great friends now; they actually bought four of our young horses a few years ago and took them back to Texas. I’m in touch with them all the time.”

Grady was recently at the center of a bizarre case of mistaken identity that caused Andi a great deal of consternation. The blog Off-Track Thoroughbreds had picked up a story about a woman in Ohio who had purchased an OTTB named Grady from an ad on craigslist for $700. The woman, a college professor and cancer survivor, was told he was a multiple stakes winner of the Indian Nations Futurity who had made nearly $800,000 in more than 100 starts.

Dawn Mellon of Bran Jam Stable, one of Grady’s former owners, contacted Andi and relayed the story. Mellon already knew that the gelding was safely and happily retired with the Pucketts but felt Andi might want to get to the bottom of the issue.

“I contacted Susan Salk, editor of the blog, and told her this was obviously the wrong horse. I wanted it corrected and didn’t want people thinking that I had sold him or that he was mistreated in any way. She called back, saying the woman in Ohio was pretty sure she had the real Grady. I said ‘Well, I have the papers, we raced him, we retired him. She has the wrong horse.’ ”

Salk asked Andi for a photo of Grady’s papers. When Andi obliged, Salk asked if she would mind speaking with the owner of the “mystery Grady” and perhaps help the woman determine the identity of her purchase.

The conversation revealed few similarities between the two horses. The horse in Ohio is a sweet, kind, tall bay with a blaze face. Grady, maybe 15.3 on a good day, has no white hairs anywhere.

And that’s fine with Andi. She tried different ideas and options for his new life at the farm, none of which took root. He was “horrified” of ground poles and didn’t want to jump. He’d complete a few circles on the longe line and then stop and look at Andi as if to say “Really? This is just stupid.”

“So I figured I’d just ride him,” she said. “We went into the ring, and he wouldn’t move forward. He was content on his own. He trained himself out in the paddock every day. He sure didn’t owe us anything, so I didn’t push it. Now I’ll tack him up and take a stroll around the farm, and he’s happy doing that.”

Thinking he might enjoy turnout with a friend, she put him out with her kids’ Shetland pony, Twinkie. That lasted peacefully for about a month before wee Twinkie was picked up and flung across the paddock one day. A larger buddy didn’t seem to deter Grady, and after about the same amount of time he would decide to whup up on whomever happened to be sharing his space.

Grady has been in solitary confinement ever since.

“People have suggested that I turn him out with one of my mares, but it’s not worth anybody else getting hurt. He’s just going to have to live like a stallion. And he’s fine; he’s happy. He can see other fields of horses from his paddock. He does live next door to my big Quarter Horse, and they can visit over their screens. So he’s got horse friends, but he just can’t go out and play with them. That’s just him. And I think that’s why he ran the way he did.”