A small Delaware farm literally minutes from the Atlantic Ocean isn’t exactly the place you expect to find foxhunters, much less off-the-track Thoroughbreds. Standardbreds and Chincoteague ponies, maybe–after all, when in Rome. . . but thanks to CANTER Mid Atlantic, former runners Areutrue and Bling Star Dreams are thriving with owners Jim and Pat Griffin at 20-acre Stillwater Farm in Lewes. 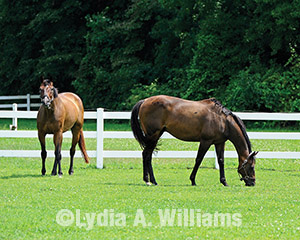 Transplants from the Washington, D.C., area, the Griffins came to foxhunting later in life. Born in Texas and raised in Arkansas, Jim Griffin migrated to the D.C. area after being discharged from the Marine Corps. He had ridden as a child but renewed his interest in the sport after meeting Pat, who was taking a lesson at a local stable.

“Back then it was me and six 10-year-old girls,” said Pat, the State Court Administrator of Delaware. “You can just picture that.”

“It was a clinic, right around here at an indoor facility,” said Jim, an attorney in private practice. “This was many years ago. So I went and they put me on a horse; I was just messing around. But Richard Zimmerman, who was teaching the clinic, was a member of Wicomico Hunt.”

Soon, Zimmerman had Jim Griffin jumping fences and asked a simple question, “Do you like to go foxhunting?” Griffin had never hunted, but he had ridden, and went hunting on one of Zimmerman’s horses.

“He had a service–for $75 he’d bring the horse all turned out and you’d just drive your car and get on,” Jim said. “I had never hunted but I had ridden, so I tried it.”

When the Griffins found themselves in the market for hunters, they contacted CANTER’s Jessica Morthole. She rides out with the Wicomico Hunt Club, of which Jim Griffin is a master.

“Jim leads second flight of the Wicomico Hunt, and that can be a tough job for any horse, let alone a green Thoroughbred,” Morthole said. “I really wanted to make sure I paired them with the right mounts for the job. I think it would be tough to find better horses. They took right to it; they are both lovely horses.”

CANTER Mid Atlantic takes horses on donation from trainers at Bowie, Charles Town, Delaware Park, Laurel and Pimlico. The racehorses are let down, re-trained and then re-homed. Each receives a minimum of 30 days–but typically up to 90 days–of training to ensure a good foundation. Morthole works particularly hard to determine what types of jobs and riders will best suit the horses.

“Many people read my blog and follow the horses through the re-training process,” she said. “We have a loyal customer base. When you make happy matches it really does wonders in building word of mouth about our program.”

Areutrue was the Griffins’ first acquisition. His previous owner, Dawn Mellen of Bran Jam Stable, reached out to CANTER when the gelding’s career began to wind down. Mellen’s non-profit, After the Finish Line, tries to retire horses owned by their stable. Areutrue ran on the West Coast for nearly four years before ending up on the Pennsylvania circuit late in 2010. The dark bay Florida-bred son of Is It True and the Wardlaw mare Permissive retired at 7 in 2011 after 38 starts, three wins and $69,650 earned.

“He took right to his new job,” Morthole said. “He was lovely in the bridle, loved to jump, hacked out quietly and just answered yes to anything you asked of him. When Jim said he wanted a horse that would hunt, I knew this one would be perfect for the job.”

He was. So much so that Pat Griffin laid claim to him herself.

“’Ru’ is the nicest horse I’ve ever had,” she said. “I was looking for a safe horse. Actually Jim ended up with him first, and then I stole him because he was just so nice. He’s really a great pet. He’s very calm; some horses can’t take foxhunting because there is just a lot going on. But he is a wonderful guy. . . just a nice, easy temperament.”

Great news for Pat, but Jim was a man without a horse. Back to the drawing board–and Morthole–and Bling Star Dreams entered the picture.

The towering light bay, now 9, was bred in California by David Abrams, Tom Roberts and Victor Johnson. The son of Unusual Heat and the Corporate Report mare Chairwoman was donated to CANTER by trainer Peter Levine. A career that began in May 2009 at Hollywood Park ended 3,000 miles away at Delaware Park in September 2011 with a resume of 24-4-5-3 and earnings of $56,666. Levine, who has donated several retirees to CANTER, informed Morthole that the horse had a minor tendon but had been rehabbing at a local farm.

Morthole went to visit, and fell in love.

“I hadn’t seen the horse, but trusted Peter when he said he was lovely,” she said. “When he walked out of the stall, my jaw dropped. Wow, this horse was stunning and the tendon was so minor you couldn’t see it.”

The gelding ticked all the boxes; he just needed more confidence and seasoning before taking on his new role as a field master’s mount. Jim used off-season trail riding and popping the horse over logs and natural elements encountered along the way. The transition with Wicomico was seamless.

The Wicomico Hunt Club, the Delmarva Peninsula’s only remaining hunt sanctioned by the Masters of Foxhounds Association, has fixtures in Maryland and Delaware. The kennels are in Newark, Md., just south of Berlin, with the closest fixture to the Griffins in Laurel, Del.

“We hunt a big 600-acre farm on Woodland Ferry Road, and behind the farm along the Nanticoke River and Broad Creek there are about 2,000 acres of [Nanticoke Wildlife Area]. The fox is hemmed in by the river and the creek on both sides,” Jim said. “We have about 70 members, but they’re all over. Some in Delaware, as far north as Dover. Some in Maryland around Denton, Easton, Salisbury, Ocean City, Stevensville up by the Chesapeake Bay Bridge.”

The Griffins’ proximity to the coast affords them the opportunity to trailer their horses to Delaware’s Cape Henlopen State Park–about 10 minutes from their home–and ride along the beach, which is permitted from October through April each year.

“You know,” Pat smiled, “these two horses had been on the track their whole lives so they knew nothing of any of this. It proves that if you give them the opportunity, they can just blossom.”