His name is Achieve. One definition of the word states that it means “to reach or attain (a desired objective, level, or result) by effort, skill, or courage.” And Jodie Pointer thinks the handle fits her 22-year-old now white son of Waquoit. 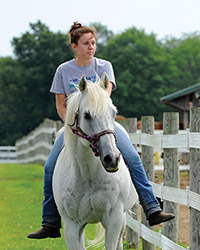 Bred in Maryland by Allaire duPont, Achieve was produced from Dawn of Reason, a daughter of Triple Crown winner Seattle Slew and the *Grey Dawn II mare Shy Dawn bred and raced by Jacques Wimpfheimer. Shy Dawn was a multiple graded stakes winner of $516,301 who won 19 of her 95 starts.

Shy Dawn’s son Opening Verse (by The Minstrel) counted among his 10 lifetime wins the 1991 Breeders’ Cup Mile-G1 and 1990 Oaklawn Handicap-G1. He retired with earnings of $1,669,357 and went on to a successful career at stud.

The *Grey Dawn II line is also prevalent in Achieve’s pedigree through his sire Waquoit whose dam, Grey Parlo, was sired by the stallion. Waquoit earned a reputation for toughness during his four seasons on the track; he banked $2,225,360 from 19 wins which included the Jockey Club Gold Cup-G1 and two renewals of the Brooklyn Handicap-G1.

For his part, Achieve didn’t let down the side. He began his career at 3 in 1995, breaking his maiden in his second start at Laurel Park for duPont’s Bohemia Stable and trainer Barclay Tagg. Achieve carried Bohemia’s famed gray and yellow silks until mid-1996 when he was sent to the barn of Ben Perkins Jr. For the next three seasons he ran primarily in allowance company for The Rainbow Stable/Larry Hall. Dropped in for a $25,000 tag at Monmouth on July 24, 1999, Achieve was claimed by Runnin Horse Stable and transferred to trainer Norman Pointer.

At that point Achieve was the winner of 11 races, multiple-stakes placed and a 7-year-old stallion. Pointer sent him out just a few more times that year at Monmouth and The Meadowlands, never finishing better than fourth.

A change of tactics–to Gulfstream Park’s claiming ranks for the winter of 2000–didn’t make a huge difference. Achieve showed little in three efforts before finishing second that March in what would be his last start. He headed to retirement with Jodie, wife of Norman’s son Tom, with a record of 48-11-5-9 and $258,541 to his credit.

Jodie and Tom Pointer own and operate Cabin Creek Rescue, an 85-acre farm in Bernville, Pa. When Achieve arrived, Jodie had her hands full.

“He came out of his last race with two bowed tendons,” she said. “They sent him to the farm; he was still a colt. But because of the two bows I was unable to castrate him right away.”

At that time the Pointers were breaking and training young horses in Maryland.

“We were there for years, and that’s where I originally had Achieve. So it was different then; I had tons of people riding. We’d break babies and then at lunch time we’d play with what I called the rescue horses. He was just one that stuck around for a longer time because it was difficult to re-school him; he was very strong willed. He’d been a decent racehorse and had done it for a long time. You know how Thoroughbreds have long had the reputation that they are tough to re-school? Well I used to say that he was was the poster child for that rumor.”

Achieve stayed with the Pointers for a few years as the tendons healed. Jodie and the women who worked for her spent plenty of time trying to determine exactly what he wanted to do in his second career. It was the typical scenario–a big, beautiful gray horse all the girls loved.

“He’s like Waquoit was. He’s tall but also broad and stocky,” said Jodie. “Maybe because he was a colt for so long, he’s got that shoulder and neck. And he has always been beautiful. He got a lot of attention.”
The one certainty from the onset was that Achieve definitely wanted another job. He was always happiest when given a focus.

“He eventually got very good. You know that some of these horses become beginners’ or children’s horses, but he just never has. He has always needed a strong rider. When the girls started showing him, he loved that; he totally focused on the job. And I think that goes along with the Thoroughbred–that mentality and work ethic.”

Achieve showed in the hunter/jumper ranks, eventually becoming proficient around 4-foot courses. One nagging issue which always plagued his riders was his constant need to do things quickly. While that served him well in jumper classes, it was a hindrance that needed correction at hunter shows. During one particular lesson from a professional trainer, an exercise that was meant to slow him down actually backfired.

“They tried to make him approach a 3-foot jump at a walk to make him slow down, but instead he jumped it from a walk,” Jodie said. “So the trainer said ‘OK, well he is what he is.’ He was an athlete. Everything anyone pointed him at he could do.”

“He’s never relaxed on trails. He gets all sweaty and jiggy. He doesn’t know how to act in that world where everybody’s walking and talking. I rode him about four months ago, took him out on the trail. He was the same horse he was years ago where he was just yanking on me. We had to go faster, we had to do more.”

Achieve doesn’t have to do more than hang out with his four pasture mates at the farm. Arthritis finally caught up with him, and over the past few years he’s developed melanoma. But as long as he remains as healthy and happy as he is, Jodie remains happy.

“His weight is still pretty good for his age. He’s still getting along and doing well, but he definitely has the cancer issue. He’s the boss of the horses he lives with. Like the trainer said–he is what he is.”

For the Pointers, having Achieve and others retired on their farm is a simple matter of principle.

“I believe everybody’s trying to do the right thing. The truth is, if a trainer or an owner has a choice–this horse has a home or this horse is getting on a truck to Canada–they want to find that horse a home. I just do it because I should. I’m part of the racing industry so I have to be part of the solution.”