Serelee Hefler was excited to talk about Here’s the Plan. “This has been my Bucket List item for the past year,” she said, leading the strapping son of Smarten and the Horatius mare Video Sister out of his paddock at Worthmore Farm in Chestertown, Md. 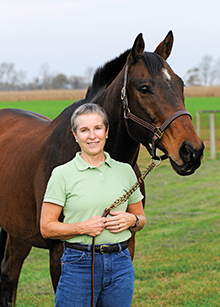 Hefler–fit and athletic at 65–has had the 17-year-old gelding for 11 years. In 2003, she heard owner/breeder Cynthia McGinnes was looking for a home for an ex-racehorse. Hefler’s husband Norman Fraley went to nearby Thornmar Farm to have a look.

Hefler and Fraley, a former amateur steeplechase jockey, had been given the heads-up about the horse by their friend Binnie Houghton. Houghton and her longtime friend and neighbor McGinnes network together when trying to place retired runners.

“My husband came home afterward and reported the horse to be a big, strong-looking bay gelding that seemed very kind,” Hefler said. “So we picked him up and brought him home.”
Bred and foaled at Thornmar, Here’s the Plan was the first foal of Video Sister.

“She was a wonderful mare by Horatius out of a ditzy mare named Wicked Stepmother,” McGinnes said. “She combined her father’s sweet disposition with her mother’s hysteria. When Plan was born she loved him instantly. But when he touched her bag with his nose to nurse, she flew up in the air and knocked everyone around her down–herself, me, Plan and the night watch person.”

No one was hurt, but it took an hour and some acepromazine for Video Sister to stand still long enough for her newborn colt to nurse.

Here’s the Plan was bound for the Fasig-Tipton Midlantic Eastern Fall Yearling Sale in 1998, but an accident on the farm derailed the trip. While getting vacuumed, he kicked out at a horsefly and cut a hind tendon sheath. A bar shoe with trailers was employed to support the healing tendon, but that ended up creating another troublesome issue.

“When we tried to break him, he would buck badly whenever anyone sat in the saddle,” said McGinnes. “Finally Christy Clagett [of Larking Hill Farm] had a chiropractor go over him and discovered that one hip was out of place due to having the bar shoe with trailers on only one foot. She adjusted him and he was instantly fine.”

Here’s the Plan made it to the races as a 4-year-old in 2001 and made 29 starts in his two-season career. Both wins came in 7-furlong claiming races on the dirt at Laurel Park, inking his lifetime record at two wins, 10 seconds, four thirds and $65,075 earned with trainer Greg Wilson.

“In his last start in October 2002, he was hit in his bad leg at the start. He still finished second but the tendon was gone,” McGinnes said. “We brought him home; his hind ankle was on the ground. So we put the trailer shoes back on both hind feet this time so his hips would be even. After a year he was sound and he’s been with Norman and Serelee ever since.”

Fraley hunted Here’s the Plan for two years, then moved him over to Hefler. They live on Kent Island, Md., and board Here’s the Plan at Pam Kusher’s Worthmore Farm, a scenic 35-acre facility that is also the training base of advanced three-day event rider Tracey Bienemann. Hefler usually makes the one-hour commute to the farm twice each week.

“There’s really no place on Kent Island for me to ride, but here we’ve got the acreage and we can trailer to different farms and ride,” she said. “We also go up to Fair Hill every now and then.”

A weekly highlight is riding out with Bobby Reber’s private pack of Penn-Marydel hounds. Reber, who lives just over the Pennsylvania line not far from Fair Hill, ferries his pack to the upper Eastern Shore with the permission of the Wicomico Hunt.

“Those Penn-Marydels don’t go a long distance, but they can go pretty fast,” Hefler said. “We hunt from a 1,000-acre farm about five miles up the road called Starkey’s. It borders the river and it’s beautiful. We have one fixture with some jumps. It’s farmland, all crops, and that’s why it’s so nice. We have a couple gals that are in their 40s but most of us are around my age. I’d be surprised if we found a jump out there. There are logs on the trails but that’s it. But we’ve all done all that kamikaze stuff. . . and this is leisurely and enjoyable. We get to see all the hounds work. What’s really nice about it is we don’t have to dress up; there’s maybe on average five to eight people who go out with the hounds and we wear whatever want. Let’s just say it’s a nice, informal, relaxed atmosphere.”

And it’s that informality which Hefler most appreciates. Growing up near Clarksville, Md., she began foxhunting with the Howard County Hounds while attending the University of Maryland.

Recently, she has taken Here’s the Plan to a few horse trials. The competition barn environment at Worthmore has, she admitted, “revved up the competitive juices. I just thought he’s such a good horse, why don’t I try and see how he does.”

He does just fine, as relaxed at shows as he is in the hunt field. Hefler sticks with the smaller trials where she is able to obtain permission to ride Here’s the Plan in the hackamore she has used on him for years.

“He kept messing with the bit all the time when we first got him,” she said. “He was never happy. So I thought you know what, I’ll try a hackamore. And I’ll tell you what–there isn’t any place I wouldn’t take him. He’s so good in it. He’s kind and seems to honestly enjoy everything we do together. We have a great partnership that I hope will continue for a long time!”

“He honestly is the most lovely foxhunter,” she said. “I have followed him for years in my trusty car, often thinking that if I ever started hunting again I would love to have a Plan. But you know, they are hard to come by.”