“You can’t do that with a Thoroughbred.”

Samantha Graham heard that a lot when she adopted Fast Talking in 2012. 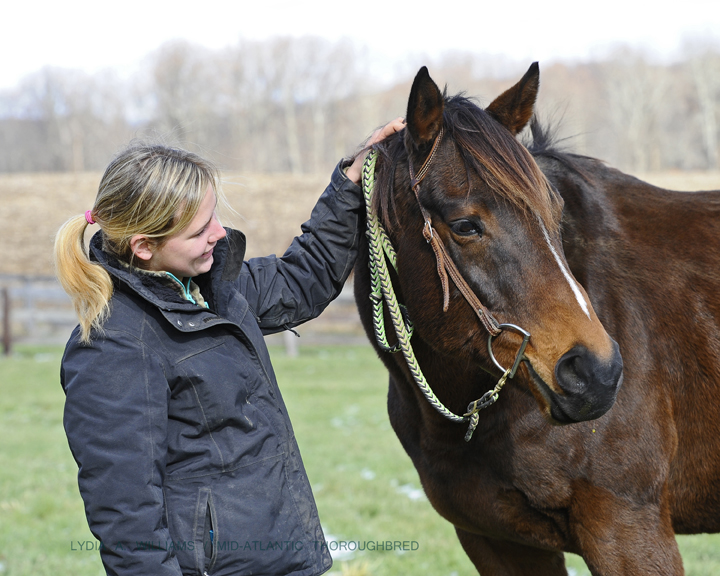 But it takes only a brief conversation with Graham to recognize that remarks meant to deter simply serve to spur her on. The 21-year-old niece of Laurel Park-based trainer Robin Graham was looking for a horse to use in Western speed events–barrel racing, pole bending, keyhole, flag race, etc.

“In high school I worked off lessons and riding time. My dad would always take me down to the racetrack on Saturdays; I’d get there around 5 a.m. So I had no social life per se; it was all about the horses. I worked for my aunt and also for Rachel Lively for a little bit.”

When it came time to find a horse, Samantha sought plenty of opinions. Some suggested a Quarter Horse. Robin had other ideas and mentioned a horse on her farm.

“There’s no reason that a Thoroughbred can’t do it, and this horse tries to do whatever you want him to do,” she told her niece. The horse was the third foal of Skeedattle Associates’ multiple stakes winner Gin Talking (Allen’s Prospect—Chattin, by Rollicking). Trained early in her career by Hamilton Smith, Gin Talking won three consecutive stakes at Laurel as a 2-year-old in 1999: the Maryland Million Lassie, Heavenly Cause and Maryland Juvenile Filly Championship.

Transferred to Robin Graham’s barn the next year, Gin Talking repeated her stakes triple with scores in the Maryland Million Oaks, Anne Arundel Stakes-G3 and the Broad Brush Stakes against colts. It was enough to earn her Maryland-bred awards as 3-year-old filly champion and Horse of the Year in 2000.

Hopes were understandably high when Gin Talking delivered a strong bay colt by Hennessy on Jan. 27, 2005. Offered at the 2006 Keeneland September Yearling Sale, Fast Talking was a $500,000 RNA. The Skeedattle partners brought him home and sent him to Robin.

His maiden-breaking first start at Pimlico in June 2007 was encouraging enough that he immediately moved to stakes company. He showed little in his next two efforts but earned confidence and a win in a first-level allowance at Laurel in April 2008. Back in stakes company two weeks later, he was fifth to Icabad Crane in the Federico Tesio Stakes at Pimlico.

Undeterred, Fast Talking’s connections sent him to Belmont for a crack at the Peter Pan Stakes-G2. Waiting quietly in the receiving barn before the race, Fast Talking suffered what Robin believes was a career-altering injury. 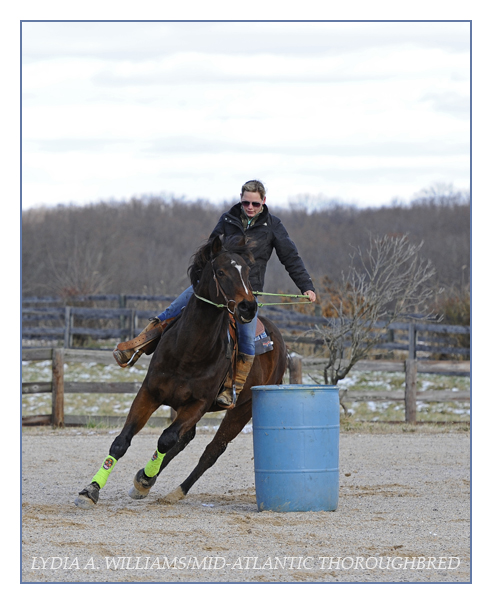 “He was in his stall and a pigeon flew up in his face while he was standing there tied in the front, waiting. He slammed backward into the back wall, and we all think that’s when something happened. And he ran a horrible race that day–it was just terrible.”

He finished last of nine, beaten nearly 60 lengths. Fast Talking missed the next nine months, returning at Gulfstream Park in February 2009 for trainer Dale Capuano. In six starts over two more seasons, including one for a $10,000 claiming price, the horse finished no better than fifth. And that was enough for Skeedattle to close the curtain.

The owners asked Robin if she wanted the colt. She didn’t take long to answer, though she did have Fast Talking gelded to help him fit into life away from the racetrack.

“No matter how nice they are, if they ever get time off they have to be alone, and that just seems horrible to me,” she said of colts off the track. “As far as dealing with him day to day he didn’t need to be a gelding, but someday someone was going to want to turn him out, so it seemed real wrong not to do it. I took him because I liked him; I certainly didn’t have a need for him. I didn’t want him going someplace where somebody didn’t think he was as cool as I did.”

Samantha fits that description and has taken an oath to never sell.

Most of Samantha’s friends ride Western, and she had always wanted to pursue it. Robin had used Fast Talking as a pony at Laurel for a short while, so he was accustomed to Western tack. But plenty of people offered discouraging opinions about using an off-the-track Thoroughbred for the events.

As it happened, she took Fast Talking to a show less than 24 hours after bringing him home. Looking for some education, she planned on riding him around, not competing. Of course, he ended up going in several classes and handling it all with grace.

Just another day in the life of a Thoroughbred.

Naturally, it’s been suggested that she compete in hunter/jumper shows with him, but she much prefers the laid-back, casual atmosphere of the Western events. Fast Talking, for his part, seems agreeable to pretty much anything.

“I love jumping,” Samantha said. “I work on it with him, but I don’t really like getting all dressed up. I love being able to wear my cowboy boots, jeans and a nice shirt.”

She’s determined to keep the Skeedattle partners and her aunt in the loop, sharing videos and photos of the horse honing his new skills.

“They all think it’s great,” she said, “but I would say that everyone is kind of surprised that I’m doing all of this with him.” 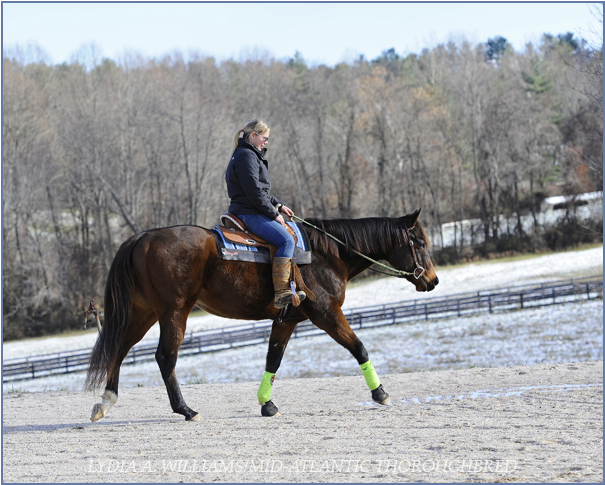 As for the friends who swore she couldn’t do this with a Thoroughbred? They’re believers now too, calling Fast Talking “cow-y”–pretty much the highest praise one can bestow upon mounts used for the sorting and penning events. And her experience with him has been so positive that she recently adopted another young Thoroughbred retired from training–5-year-old Scipion gelding Meredith’s Joy who raced for Benny Feliciano.

“I call him Chief,” Samantha said. “I got him in July; he came off the track in March. He’s pretty quiet. He and Cash are in a field with seven other horses. All the other horses are doing their thing, but those two are off by themselves. They have been best buddies since I got him. He is in training right now, and if it works out the way I want it to, he will be my main barrel horse. I would never have anything other than an off-the-track Thoroughbred now.”

Robin Graham couldn’t be happier with the way things have worked out for Fast Talking.

“He was a horse who tried. He always did the best he could do. He just got looked after because everybody loved him so much.”