Bonita Farm has always been a family affair. The sprawling Harford County training center is the homestead of the Boniface family, three generations of which are deeply rooted in the Maryland Thoroughbred industry. 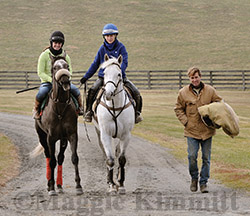 As any member of the clan will tell you, the current Bonita is “The house that Deputed Testamony built.” The 1983 Preakness Stakes and Haskell Invitational winner–a homebred–bankrolled the purchase of the Darlington property and lived there until his death at the ripe age of 32 in 2012.

These days, the rolling pastures are still populated by homebreds with long-established Bonita Farm bloodlines. And Learning, the barn pony, comes from one of the best.

Now arctic white at 13, the son of Lear Fan was produced from Northern Flair, a daughter of Caveat and the Northern Jove mare Northern Sting. A Maryland Broodmare of the Year, Northern Sting was a multiple stakes winner and also the dam of Northern Flair’s full-siblings Ops Smile and Icy Warning, in addition to 2000 Maryland Million Classic winner Testing.

“Ops Smile was an important one for us,” said Kevin Boniface, of the Grade 1 winner. Running for owners Schipke/Warfield/Karp, Ops Smile was trained throughout his career by Kevin’s father Bill and earned $785,246 over five seasons before retiring to stud.

Icy Warning began her career under the tutelage of Bill Boniface for breeder Ryehill Farm but later carried the colors of Team Valor International to two stakes wins and multiple graded stakes-placings with Mark Hennig. She won nine races and $516,202 in her 51 starts. As a broodmare, she has produced stakes winners Snow Cone (Cryptoclearance) and Devotion Unbridled (Unbridled), herself the dam of graded stakes winner Unbridled Humor.

“Northern Flair was Grand Champion at the MHBA Yearling Show in 1996,” said Chris Boniface, Kevin’s wife. “I galloped and groomed her. We took her to Saratoga for her first start and she dwelt in the gate. But she won a couple of races for us and she’s still here.”

The mare had difficulty getting in foal until Kevin and owner Richard Granville decided to send her to Lear Fan in Kentucky in 2001. On April 9, 2002, Learning was born at Bonita Farm.

“We have a wonderful owner in Dick Granville who is so patient,” Kevin said. “He says ‘Don’t run them until they’re ready.’ ”

Kevin was sure Learning was ready for a maiden special weight on the turf at Pimlico in May 2005. The trainer was right. Learning won by nearly 4 lengths under Richard Monterrey, but it had taken some serious salesmanship to get the jock on his horse. Kevin called Monterrey’s agent J.D. Brown and told him the first-time starter was worth riding. Brown wavered, preferring to take the call on a Lael Stables runner for Michael Matz sure to be the heavy favorite.
“Listen, you want to ride my horse,” Kevin told the agent.

Sent to Delaware Park a month later for his next start, Kevin employed the same tactics when convincing Ramon Dominguez to accept the mount. Agent Steve Rushing had another opportunity in mind but was swayed to Learning’s side when Kevin declared, “Listen Steve, he’s the goods.”

Right again, as Learning won his first test in allowance company. The big gray wasn’t without his quirks, however. Before the first start at Pimlico, he threw his head–“That’s a Caveat thing,” Chris said emphatically–and nailed Fritz in the face. His race charts bear comments like “raced a bit erratically” and “was hard to load.”

But Kevin and Chris point to the Humphrey S. Finney Stakes at Pimlico as his finest hour. Three lengths the best of Easy Red, Learning had earned black type in just his fourth start–and he’d done so in Maryland.
“It was a pretty cool thing,” Kevin smiled.

Learning ran for three seasons, always in allowance or stakes conditions. When Kevin sensed that the horse was losing interest, Learning was retired. Dropping the horse into the claiming ranks was not something any of the connections ever considered and, as Kevin told Granville, “You know my wife’s in love with him.”

When Learning retired as a 5-year-old in 2007, he took his record of 19-4-4-1 and $119,570 home to Bonita Farm with him. There was never any question that he’d return to his birthplace, and Chris already had plans for the gelding–despite the protests of her family.

“The Granvilles love their horses, so they gave him to me when he stopped running. He’s a little crazy; nobody ever thought he would be a lead pony,” she said. “As a racehorse he was tough, and he’s still wild. When he knows it’s time to work, he’s good. He foxhunts, he ponies, and we usually go out riding on Sundays. He’s a GREAT jumper. But if we go trail riding I can’t get him around anybody for the first 30 minutes because if he touches noses, he’ll squeal, wheel and strike.”

Hearing that remark, her brother-in-law John Boniface stopped and grinned as he walked past.

“I galloped him the other day, and I hadn’t galloped a horse in a long time,” he said. “I was really sore all week.”

John remembers feeling the same way his brother did about the young, untried Learning. “And sometimes you want to pat yourself on the back when they turn out to be good ones like he did.”

Kevin chimed back in, relaying an incident that had happened earlier that week when he and Chris were out riding together.

“We were out galloping,” he said. “I looked back and Chris and Learning were about 30 lengths behind me. We were rolling across the fields, rippin’ and roarin’ and I couldn’t hold my horse, so I just let him go on. Next thing I knew, Chris was right up with me! So he’s still got it.”

He’s also got a kid brother who has Bonita buzzing. Kevin lights up when he talks about Split Rock, a 3-year-old son of Not For Love. Chris calls the bay colt “the reason I’m probably not going to retire from galloping.”