Details
From May 2015 Issue
Written by Maggie Kimmitt

It was the gasp heard round the world. And 10 years later, the team behind 2005 Preakness Stakes runner-up Scrappy T still runs the gamut of emotions whenever the subject is broached. 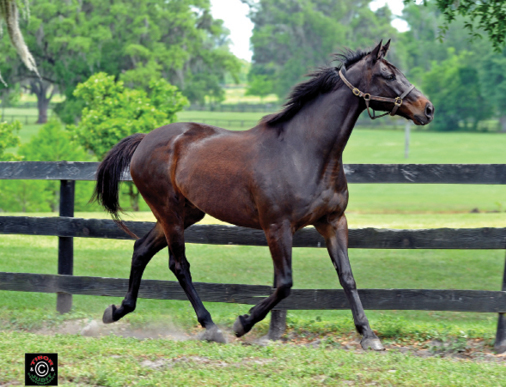 Mention the horse's name to the average racing fan and they'll relay the play-by-play in their mind's eye of those few seconds when Scrappy T veered sharply into the path of eventual winner Afleet Alex. Smart money says the same fans won't have too many kind words for Scrappy T.

But the 13-year-old gelding was?–?and is?–?so much more than a freakish near-miss at the head of the Pimlico homestretch. And the folks who know him best will tell you all about the horse who took them on the ride of their lives.

Virginian Marshall Dowell and his trainer, Robbie Bailes, were shopping for 2-year-olds at the OBS sale in Florida in April 2004 when a rangy, nearly black colt from the consignment of Paul Sharp got their attention.

"There were about five horses we liked at that sale," Bailes said. "He had a really great walk, and the mare had produced consistent winners."

Dowell paid $35,000 for the Kentucky-bred son of Fit to Fight—Perpetual Light, by Sunny's Halo. He shipped from Ocala to Bailes' then base at Bowie Training Center in Maryland where groom Benny Ayala and exercise rider Emily Daignault-Salvaggio rounded out the crew. Daignault-Salvaggio was sold almost right away.

"He was huge and he was amazing," she said. "I was telling everyone in September and October that this horse was going to be busy the next May. I said to everybody, 'I'm telling you, this horse is real.' They all thought I was crazy. But when he got down to business, he was incredibly impressive. And when he wanted to play, incredibly terrifying. I always made sure my health insurance was paid up. But he was awesome."

Bailes sent Scrappy T out five times at 2; on Halloween, he broke his maiden at Delaware Park in his third start and finished second in two Aqueduct allowance races to close the year. Bailes was confident enough to consider stakes to start the sophomore campaign.

Scrappy T rewarded that faith with a win in Aqueduct's Count Fleet Stakes in the first outing. Next came a third in the Whirlaway before diving into Grade 1 company in the Wood Memorial. Scrappy T wound up third in Bellamy Road's romp. Three weeks later, however, Scrappy T had things his way, winning the Grade 3 Withers.

"After the Withers, the one question everyone was asking was if we would wheel him back in the Kentucky Derby. We thought it was too quick and really didn't want to face Bellamy Road again," Bailes said. "We thought giving him a little extra time for the Preakness was a good idea, and we got Ramon [Dominguez]?–?that was important. We were hoping that we would catch everyone else coming into the Preakness a little tired and we would be on our way up. Everything worked except for the turn for home."

The adjective most used by the connections is surreal. They were local favorites. Bailes is the son of the late Maryland trainer W. Meredith "Mert" Bailes. Dowell had owned and raced horses in the Mid-Atlantic for years. The up-and-coming Dominguez was one of the most successful and sought after riders on the East Coast. Daignault-Salvaggio, a native of Towson, Md., was an Oldfields School graduate. Their horse was a graded stakes winner who had never been worse than third in nine starts. Hopes were high.

But in fractions of a second, life changed with a swat and a swerve.

A different Delaware-based horse, Afleet Alex, became the hero; Scrappy T?–?to many?–?the villain. Bailes and Dowell went back to the Pimlico stakes barn befuddled but grateful that neither horse went down. Getting their breath and their wits, they waited for Scrappy T, Ayala and Daignault-Salvaggio to return from the test barn.

"Win, lose or draw, we had finished second in the Preakness," Daignault-Salvaggio said. "The best part of my whole experience was in that test barn. There we were, two Delaware Park barns?–?every one of us who saw each other day in and day out with two of the greatest horses of our barns' careers. Nobody was more happy for each other. There was just celebration?–?our grooms, their grooms. We were hugging, I was petting Alex, they were petting Scrappy. It wasn't like two separate entities that never intertwined. It was the greatest memory of my life. Ten years removed from the whole thing, I have the same opinion. Scrappy was one helluva horse."

Scrappy T made three more starts in 2005, finishing second in the Indiana Derby-G2 and Discovery Handicap-G3. After a hiatus of more than two years, he returned as a 6-year-old in 2008. Four mediocre efforts were enough to convince Bailes and Dowell that it was time to close the book.

"The thing is, he was probably the soundest horse I've ever trained," said Bailes. "I've had a lot of sound horses that couldn't run, but I don't think I've ever had a sound horse that could run as fast as he could."

Dowell's priority became providing a possible retirement. He sent the horse to the Powhatan, Va., farm of friend Willie Mason, whose daughter Danielle rode him in a few shows. When Dowell later purchased a farm in Ocala, Fla., his first order of business was shipping his horse south.
Dowell buys weanlings and pinhooks them, and his stable star has proven to be an irreplaceable assistant.

"He's been here for a little over five years now," the owner said. "He's a teacher. We turn him out with the babies and he does a remarkable job. He watches them come, watches them go and makes friends with them in the meantime."

And when the occasional guest fancies a hack around the farm, Scrappy T is happy to oblige.

"He was a bit hard to handle in his earlier years, but as we all get a little longer in the tooth, we settle down," Dowell said. "He truly, truly is an absolute gentleman, a delightful animal. You know, everybody always wants to say 'Look what he did for me, now I've got to do this for him.' Well, in Scrappy's case, you want to keep him and you want to be around him. . . because it's about what he does for you now."