On the last Friday in April, Regina Welsh took an impromptu stroll down Memory Lane. Walking the Maryland Hunt Cup course with rider Diana Gillam, Welsh was transported back to the same spot 11 years earlier–the day before she saddled Bug River to the first of two Hunt Cup wins.

That accomplishment is a highlight in any career, but to a 28-year-old trainer of just one horse, it was a defining moment. 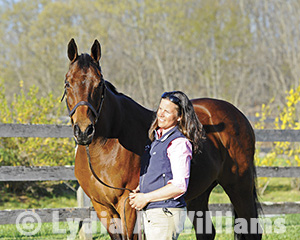 “He wasn’t fancy,” Welsh said. “He was just the total stealth underdog.”

Fancy is as fancy does. Mike Hankin originally purchased the son of Polish Numbers and the Pilot Ship mare Bug Eyed Betty as a foxhunter. Bug River ran on the flat for two seasons for breeder Thomas Bateman’s B.E.B. Stable and trainer Dickie Small, with allowance wins and stakes placings. When Bug River began to tail off toward the end of his 3-year-old season, his connections cast out nets for a second career.

“Eileen Poole had started him jumping,” Welsh said, “and Ann Stewart thought he would be a great hunter for Mike.”
He was. So much so that Welsh and Hankin decided to take a shot at running the gelding over jumps.

Before going to work for Hankin, Welsh had put in time with several of the household names in jump racing: Bruce Fenwick, Jay Griswold, Billy Meister, Bruce Miller and Jack Fisher among them. She had her trainer’s license, and had a great deal of faith in Bug River.

His first start over timber came in September 2001, a second at Shawan Downs. He failed to finish his next four starts, pulling up for various reasons. Welsh was frequently told Bug River “made a weird noise” and had wind problems. Treadmills and scopes revealed nothing.

There were mishaps and near-misses. Riding Bug River at Shawan Downs in 2002, Chip Miller went off course in a race they were leading. Hankin recalled a more serious incident where a splinter from a timber fence stuck in one of Bug River’s hind legs.

“That was the way it was for the first few years,” said the owner. “Nothing seemed to go right and we could never get him to settle down in a race. It was Blair Waterman’s (now Wyatt) riding style and patience that figured him out and helped him to relax in a race. At that point, his jumping ability–I think he hit one fence out of 88 in his four Maryland Hunt Cup races–and huge heart took over.”

With Wyatt now a member of the team, Welsh figured out that Bug River’s primary problem was anxiety. While male riders had trouble holding him, Wyatt rode him in a straight happy-mouth bit. He hated a rider picking up the reins, so Wyatt let him have his head.

“By then I had figured out that if you dropped him out the back door, he just kind of followed behind like no big deal,” Welsh said. “But as soon as he hooked up with another horse, he was gone. So you’d better be ready to finish the race, because he was going to go all out.”

In the end, it was a woman’s touch that did the trick with Bug River. He and Wyatt won the Murray Memorial on the Grand National card in 2004 and coasted into the following Saturday’s Hunt Cup on a high note. As planned, Wyatt let the rest of the field go on ahead for the first 3 miles or so, and Bug River zenned out behind. Settling comfortably off the leaders, they drew even three fences out. She picked up the narrative from there:

“We flew the 16th and then just started galloping on top. We jumped the 17th, and I knew I was going well and some of them were struggling. Then galloping to the 18th, Patrick Smithwick was out there in the middle of that field yelling ‘Go on Blair, wake him up!’ I’ll never forget that; it really stood out. He was just so random out there all by himself.”

Wake him up she did, and they powered away to win by 11 lengths. It was Wyatt’s first–and so far only–Hunt Cup win.

“I’d never had a Hunt Cup runner. I’d had horses in the Grand National before,” Welsh said. “I knew the race very well, timber trainers were all I’d been surrounded by my whole racehorse career. We just went for it. And it was unbelievable. All my friends were there, Mike’s business associates, people who knew Blair. I’ve never heard a crowd go so crazy before.”

The ladies in Bug River’s life were nothing if not devoted to the quirky bay. Welsh went to great measures to ward off his worry and to keep his troublesome feet together. For the next four years, she employed swimming, acupuncture, massage and any therapy that would keep the horse comfortably pointing forward.

“My assistant at the office became very good at chasing down a special shoe or magnetic healing device,” added Hankin, now an executive with Brown Advisory.

Before Bug River’s Hunt Cup appearances–he ran four consecutive years from 2004-07–Welsh would take him for an evening trailer ride and feed him on the Hunt Cup course. On race day, she would always commute the back route through Sagamore Farm so that her horse never saw the crowds, commotion or flags.

Bug River and Wyatt returned to defend their title in 2005 but were bested by a half-length by Make Me a Champ. In 2006, Wyatt was sidelined by a head injury when they fell at the Green Spring Valley Point-to-Point.

“I put him on the ground; it was all my fault,” she said. “And I hit my head as I always did. I don’t think I rode for the rest of that spring.”

Welsh tapped Chris Gracie, then a teenager, to sub for Wyatt in that year’s Hunt Cup. Following instructions, he coasted behind the field, waiting until the 19th fence to rally. Bug River got past Ivorgorian, who fell at the 21st, and beat Rosbrian (Ire) by a head to complete a second Hunt Cup win.

Team Bug River was intact again in 2007, with Wyatt and the tenacious bay engaging in a battle with eventual winner The Bruce (NZ). Bug River and Lear Charm dead-heated for second. Welsh and Hankin planned to go to the well for a fifth time in 2008. With new mother Wyatt on maternity leave, Chris Read had the mount on Bug River.

“One of the saddest days of my life was Hunt Cup morning 2008,” Welsh said. “Chris got on great with him. But that morning, Bugs was really unsound. I would always ride him the morning of a race. I’d get on him and make a few little jog loops around the field near the barn. I knew he would never pass the vet. But he would have still run, even though he was lame. That was the last time I ever sat on him. He was retired right then.”

“Bug River is doing well in retirement,” Hankin said, “He was our introduction to the sport-both the highs and the lows. But, winning two Maryland Hunt Cups and coming in second twice could not have been more exciting.”

Welsh agreed.
“I don’t think I could have asked for a better Hunt Cup horse to train. It was stressful and difficult; keeping him sound was very hard. But Bugs has more heart than any human I know. I started running myself around 2003. It was so hard when I first started, but it got easier and easier as I kept doing it. And I would always think of Bugs if I was struggling. He would just pour it on at the end even when he was totally done. And he is still an inspiration for me.”

# Kris Matlack DVM 2015-06-25 10:51
Wonderful story of a brilliant horse, trainer and lady rider. My horse Whackerjack carried Kathy Kusner as the first woman to ride in the Hunt Cip in 1971 I wish I could have seen BugRiver run!,
Kris Lindley Matlack DVM Equine et in N Wisconsin for 37years, Foxcroft Class of 1967 so very proud if Blair and Joy' s wins too...!!
Refresh comments list