Prospect Bay walks out of the barn at Larry Johnson’s farm in Bluemont, Va., and puts on a standard issue stallion show.

All the prerequisites are there. Led to a grassy knoll beside a field of mares and foals, he trumpets, rears, paws the air. It makes no difference that he has no shot with these girls; he hasn’t bred a mare in years. Old habits die hard. 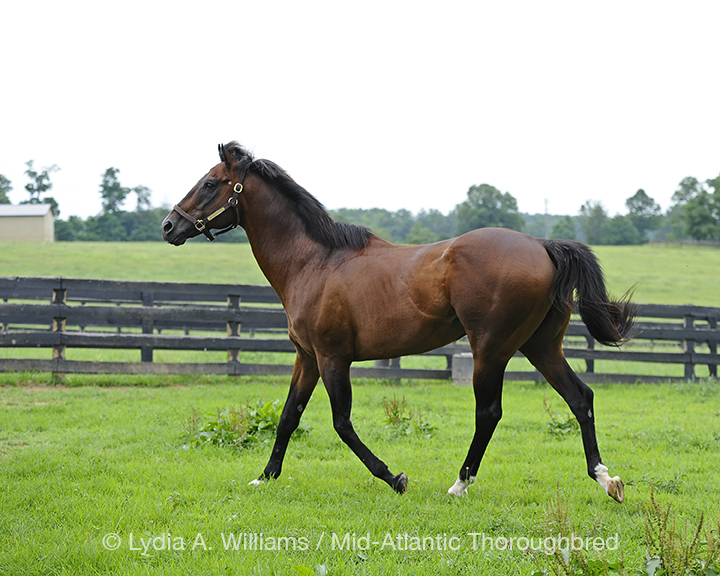 At 23, he still looks the part. His coat blooms with a deep mahogany sheen. He prefers living in the nearby paddock rather than the barn. And every now and then he does get to step up to the plate when called upon to function as the farm’s teaser.

Hopes were high when Johnson purchased the speedy son of Crafty Prospector and the Danzig mare Baltic Sea in 2001. Bred by Windfields Farm in Canada, Prospect Bay was never worse than third in his seven starts for Lucille Conover and trainer John Kimmel. One of the top sprinters in the country in 1996, he traded punches with Not Surprising, Lite the Fuse, Honour and Glory and Kayrawan. All four were there for Prospect Bay’s last race, the A Phenomenon Stakes-G2 at Saratoga that August. He and Jerry Bailey dueled throughout with Honour and Glory before Prospect Bay drew clear for the win, covering 6 furlongs in 1:08.29.

As a graded stakes winner with four wins, Prospect Bay was one of two horses considered by Johnson, eager to stand a stallion at a time when Virginia’s breeding and racing programs were thriving. That same year, Prospect Bay’s half-brother, $3.2 million earner Caller One, scored the first of his two consecutive Dubai Golden Shaheen victories on World Cup Day. 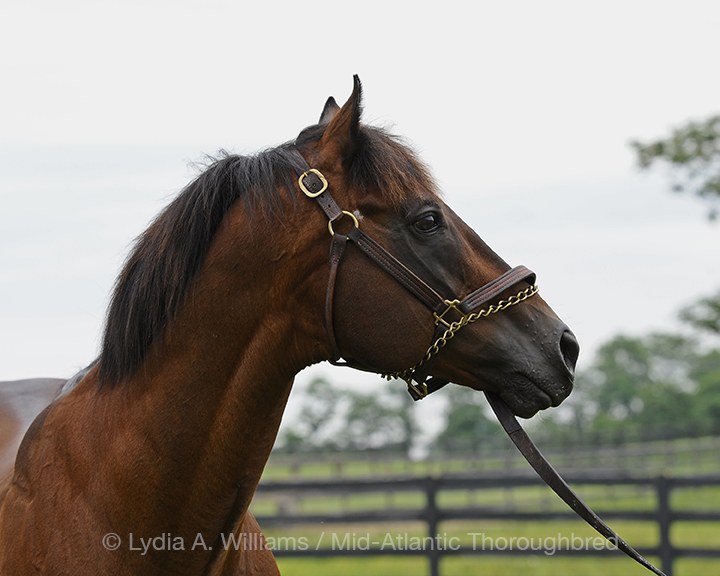 “I had a guy looking around in Kentucky, and this horse was reasonably priced. He was a terrific racehorse. His female family was really good. The other horse was Our Emblem. They were both about the same price. Our Emblem had a better pedigree, but I didn’t think he was as good a racehorse. So I thought this horse would go over well here?–?a fast horse in a market that was so speed-oriented. I bought Prospect Bay and Allen and Audrey Murray [of Murmur Farm in Maryland] bought Our Emblem. At the time I thought I was making the right call, but within a year I was struggling to get 15 mares to Prospect Bay and Our Emblem ended up siring the winner of the Kentucky Derby [War Emblem in 2002].”

In hindsight, Johnson readily owns up to some of the blame for the shortfall of his stallion’s success. Although he worked diligently to promote the horse, Johnson wasn’t supporting the horse with his own mares.

“The mistake I made was standing a stallion that I wasn’t breeding to. I bred a few mares to him, but I was trying to breed a little upper-end at that time. And as I’ve learned with Street Magician [owned by Johnson and standing at Heritage Stallions in Maryland], if you want to stand a stallion you’d better support him. And I didn’t do that.”

One owner who did support Prospect Bay was Johnson’s farm manager, Suzanne Dempsey. She liked everything about him and had the advantage of dealing with the horse on a daily basis. In 2004 she bred Morelias Star (by Star Trace) to him, resulting in El Piston, winner of five races and $121,696. The gray gelding made 43 starts over six seasons before retiring in 2013. 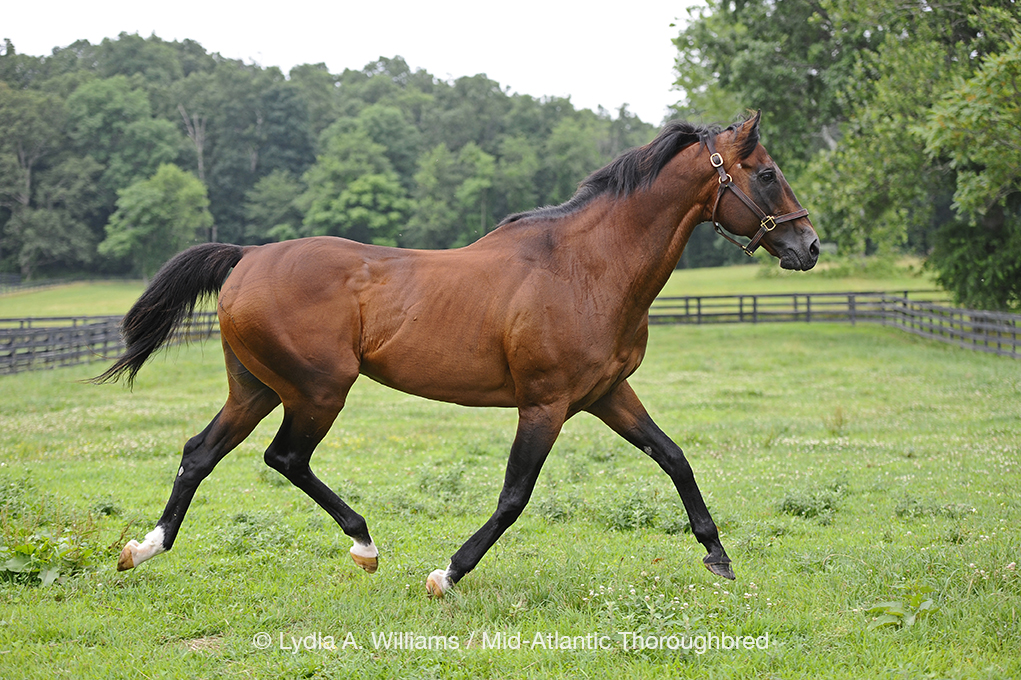 “My horse is now in Maryland with Emily Carter, who is turning him into a beautiful little event horse. She sends me updates all the time. She got him qualified for the Retired Racehorse Project’s Thoroughbred Makeover, so he’ll go to Kentucky in October to participate in that.”

When interest in Prospect Bay fell short, Johnson and Dempsey were faced with a dilemma: what to do with a breeding stallion who wasn’t breeding. Johnson sent him to West Virginia when Naylee Farm expressed interest in standing him, but that venture bore little fruit.

Steve Proctor, a local breeder/owner/trainer from the Colonial Downs area, had always loved the horse and thought perhaps he could find a few mares for him. 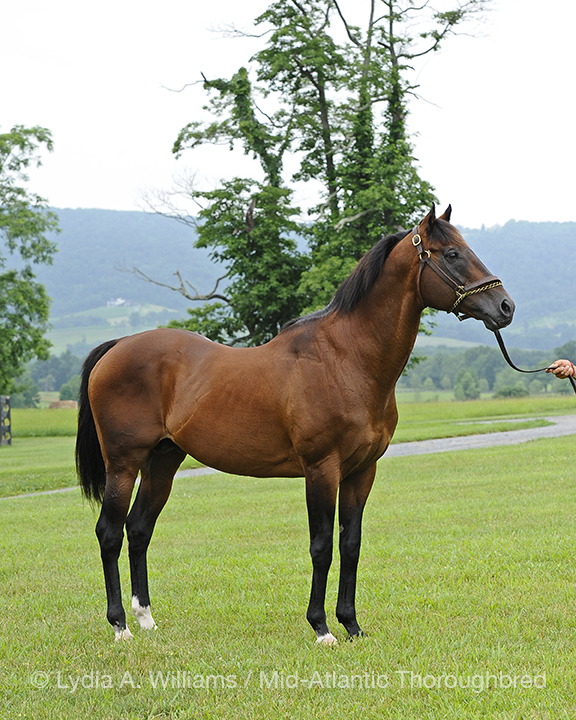 “Steve loved him and bred his two mares to him,” Dempsey said. “We weren’t doing anything with the horse, so I asked if he’d be interested in taking him. He said he thought he could get a few mares to him so he took him. . . and he ended up riding him on hacks through the woods. He LOVED him. It cracked me up because no one had sat on Prospect Bay in about 14 years.”

When it became obvious that there was no commercial market for the horse, Dempsey approached Johnson about bringing him back to the farm for retirement. Johnson didn’t have to think twice, and Prospect Bay came back home for good.

“I’ll have friends visit and will take them out to show them the babies, and for some reason people will go right over to his paddock,” Dempsey said. “And before I can say anything they’re going ‘Which one’s this one?’ He loves the attention and he’s really very sweet. The rearing thing was something he started here, and the guys really liked it when they had him on the end of the shank. He was never naughty, so they never got after him. And they love it when he does that. They’d all fight with each other about who would lead him out, because he’d stand up and put on such a show.” 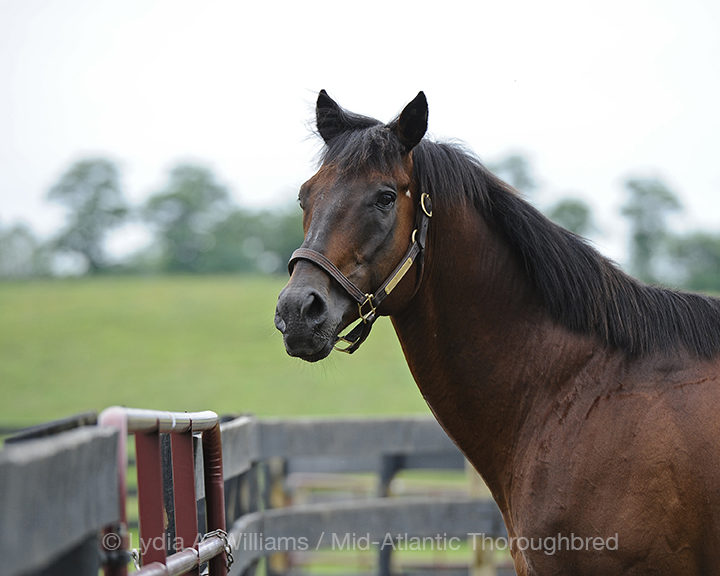 The old boy was suddenly big news this past March when he became the broodmare sire of the 2015 Dubai World Cup winner. Sheikh Hamdan bin Mohammed Al Maktoum’s Prince Bishop (Ire) is by Irish-bred Dubawi out of Prospect Bay’s daughter North East Bay.

The whole notion left Johnson grinning and shaking his head.

“It just demonstrates how unscientific all this stuff is. I buy this horse instead of Our Emblem. The next year Our Emblem sires the Derby winner and the Murrays flip him for several million dollars. He never does another thing after that. Everything about Prospect Bay said ‘stallion,’ but he just never managed to get that big horse. And now he’s the sire of the dam of the winner of the Dubai World Cup. How do you figure that?”