Alexis’s David never won a stakes race. He never set a track record, never made headlines, wasn’t sold for a hefty sum at auction. After his seven seasons on the track, he didn’t segue into a flashy second career in the show ring or hunt field. 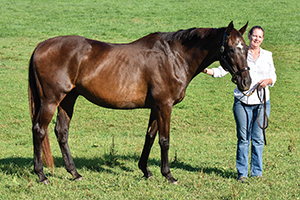 And absolutely none of that matters to Anne Carter.

Bred in Maryland by Harold Greenberg, the 26-year-old gelding by Carnivalay out of the Rollicking mare Rollicking Amy found his way to Carter via Laurie Calhoun of Summer Wind Farm in Union Bridge, Md. When Carter lost her homebred Thoroughbred mare after 20 years, her high school friend Donna Lockard suggested contacting Calhoun, who actively re-homes Thoroughbreds.

Alexis’s David ended up at Summer Wind after being vanned off in his final start at Penn National in January 1997. Trained for most of his career by Carlos Garcia, Alexis’s David was claimed as a 7-year-old by Calhoun’s longtime client Dale Capuano.

he trainer eventually lost the horse to trainer Harry Thompson, and Alexis’s David ran at Penn National until a subluxation of the ankle ended his long career. By that time he had made 54 starts, banked $198,242 and recorded a running line of 13-10-11.

“He was a hard-knocking horse that did well for a lot of people and deserved to have a good retirement,” Calhoun said. “We keep track of the horses that go through our farm to help make sure they end up in good homes and would love to see that become a standard practice for all farms.”

Carter vividly remembers her first glimpse of the horse she now calls Ben.

“He looked like a giraffe; his muscles had atrophied. My bleeding heart went out to him. Laurie had the tack thrown on him and I rode him around the barn and said ‘I’ll take him.’ ”
Carter took him to the Greenspring Valley (Maryland) farm owned by Dr. and Mrs. Gaylord Clark and turned him out. After about three days she discovered that he wouldn’t wade into the stream in his pasture because he had no idea how.

“I had to teach him how to go into it and drink water. And that first summer, he continually abscessed one foot to another–it was such a constant thing I would take all my stuff into the pasture and he would stand there for the whole process from soaking to wrapping. He is such a kind horse that the Clarks’ grandchildren would come out to help me, and that horse stood like a statue and let those kids pet and run around him while I worked on the foot. Mrs. Clark started calling him ‘Gentle Ben’ because he was so sweet.”

A rider since childhood, Carter had the skills and patience to deal with Ben’s needs. The daughter of horsewoman Dorothea “Sissy” Moore was given her first horse at age 13. 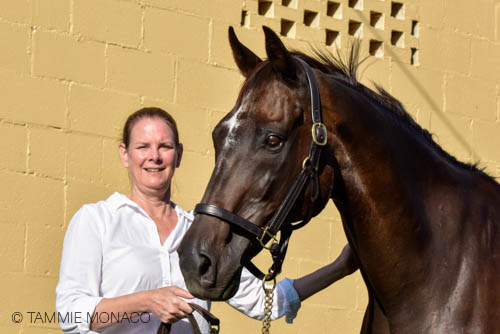 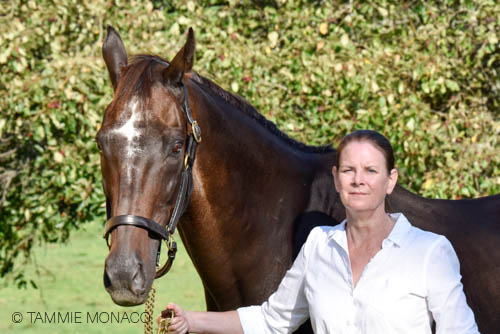 “We bought my first mare for $250 and my mom used a credit card. She said ‘Don’t tell your dad.’ They gave me the horse but I had to work the board off at every farm because they didn’t have that kind of money. Her name was Masters Glory and she was by *Master Boing, he actually won the Washington, D.C., International. She was crazy. My mom would ride her and I’d ride her.”
Carter worked at Sagamore Farm and Worthington Farm and exercised hunters to earn her mare’s keep. Now a commercial real estate professional, she still keeps her horses in the Greenspring Valley/Glyndon area.

Ben became Carter’s trail horse–and “always my priority”–even when the demands of her job cut into her riding time.

“I won’t lie and tell you he transitioned beautifully into a second career as my trail horse,” she said. “He didn’t. He was always really nervous. But he’s kind and he’s not stupid; he’s like ‘What’s expected of me?’ He loves his carrots and is just a classy old guy.”

All went swimmingly for eight years until Carter walked into the pasture one day to find Ben “three-legged lame.” Always the alpha horse, the gelding re-injured the ankle one day after chasing his pasture mates around.

“He just loved to run around out there,” Carter said. “It was his favorite thing to do.”

Vet Marla Stevens examined him and informed Carter that, while he would always be pasture sound, Ben’s days as her riding horse were over.

“He now lives the life of a pasture potato out on Holly Bricken’s farm in Butler, Md., where he resides with three other OTTBs. He gets his feet done every eight weeks. He gets a new Rambo [blanket] every winter. He gets his carrots every time I visit.” 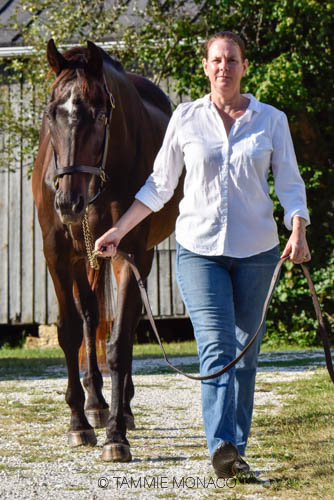 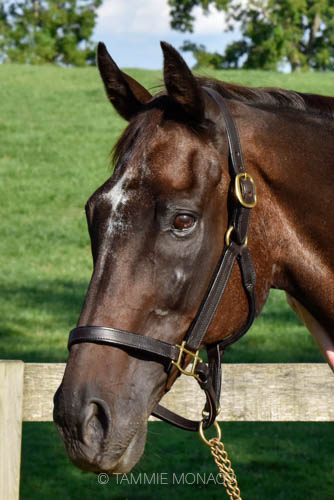 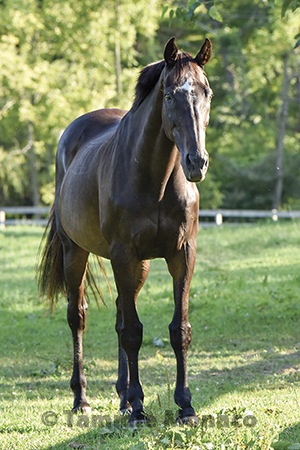