As their kids are growing up, it’s not unusual for most parents to face the dilemma of unexpected pets. Puppies, kittens, hamsters, reptiles, etc. often become unplanned members of the family once Mom and Dad have been worn down by one too many choruses of “Can we keep him. . . pleeeeeeeze?” 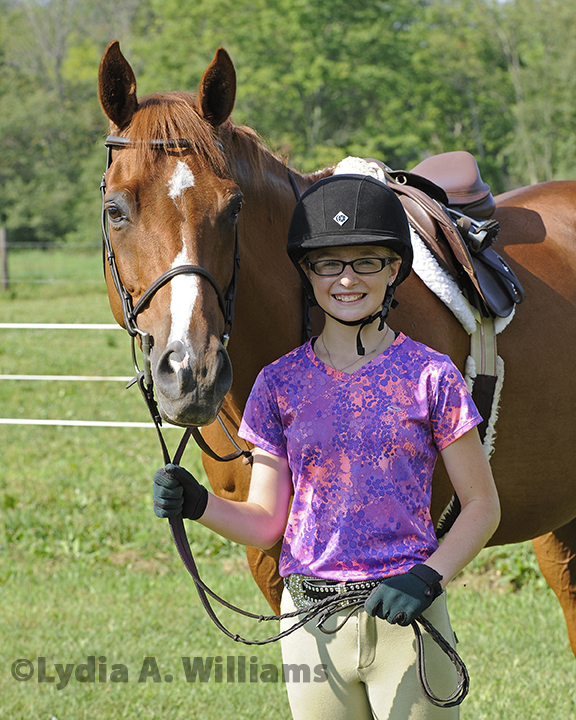 Things were no different for Cindy Robinson. Well, maybe just a little different. The puppies and kittens were horses, and her kid–Eclipse Award-winning jockey Jeremy Rose–was no longer a kid at all by the time he started bringing former mounts home to their 33-acre farm in State College, Pa.

Evil Storm was one such horse. By Storm Broker out of the Piccolino mare Matti’s Pic, the chestnut gelding was bred in Maryland by Country Roads Ltd. and ran for the partnership of George Margetson and Old Coach Farm. Trained by Mike Gorham, Evil Storm earned $463,034 in a career that spanned six years and produced credentials of 56-8-8-13.

“He was a really cool horse, an easy ride, laid back. Always tried hard,” Rose said.

Stakes-placed earlier in his career, a victory in the 2007 Maryland Million Classic was Evil Storm’s shining moment.

“That was the race of his life. I don’t think anyone expected him to run that well. I’d ridden him before in a few stakes, but he crushed that field, and it was a really decent field,” Rose said.
After continuing to earn checks for the next two years, Evil Storm was retired at age 8 after his 2009 season.

“He never really got sore, but he got to the point where he had done enough for the owners and they wanted a good home for him,” Rose said. 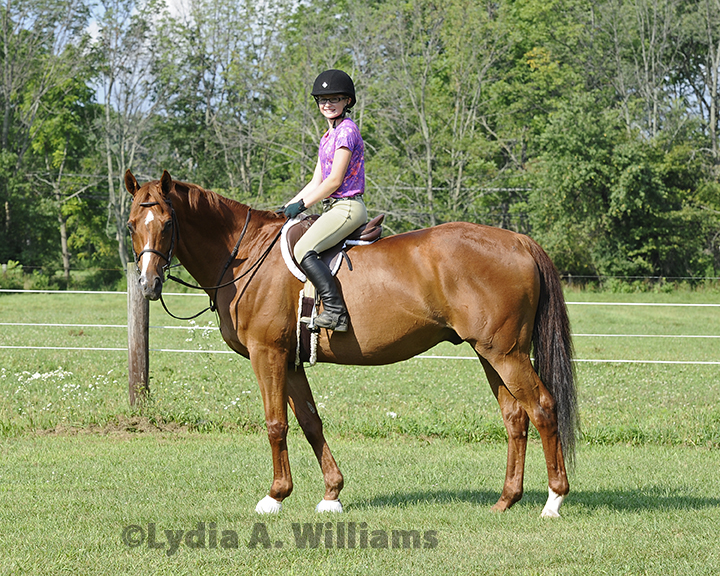 Rose didn’t hesitate to approach Gorham and Margetson and offer the horse exactly that.

“Jeremy called me one day and said ‘Mom, they’re going to retire Evil Storm, and he’s coming to the farm,’?” Robinson explained. “And I said ‘ok, no problem.’ The farm was pretty nice; we had beautiful white fencing, we had gorgeous pastures, everything was groomed to a T.”

Robinson had been down that same road before. Rose called his mother one day and asked her to drive to Penn National to pick up Balarat, his first stakes winner. When Evil Storm joined the fold, Robinson asked her friend Audra Simpson to help the gelding transition into his new career.

Simpson rode the horse that spring and liked him from the start. By fall, he was living the life of a proper retiree at Robinson’s farm when the prospect of a new home spurred Simpson and Robinson to action.

“If you have any time, I’ve got someone interested in giving Evil a good home,” Robinson told her friend. “He hasn’t been ridden for a while, so longe him first if you want to and call me when you’re done and let me know how it goes.”
Simpson went to Robinson’s farm over Thanksgiving weekend. Running a bit late, she didn’t bother with the longe line, but tacked up and went for a leisurely hack. Returning to the barn, she spent time pulling his mane and “just loving on him a bit.”

When she glanced at her phone, she noticed several missed calls and voicemails from Robinson. When she called, the voice on the other end was a little bit jumpy.

“Are you OK?” Robinson asked.

“Yeah, sure, why?” Simpson replied 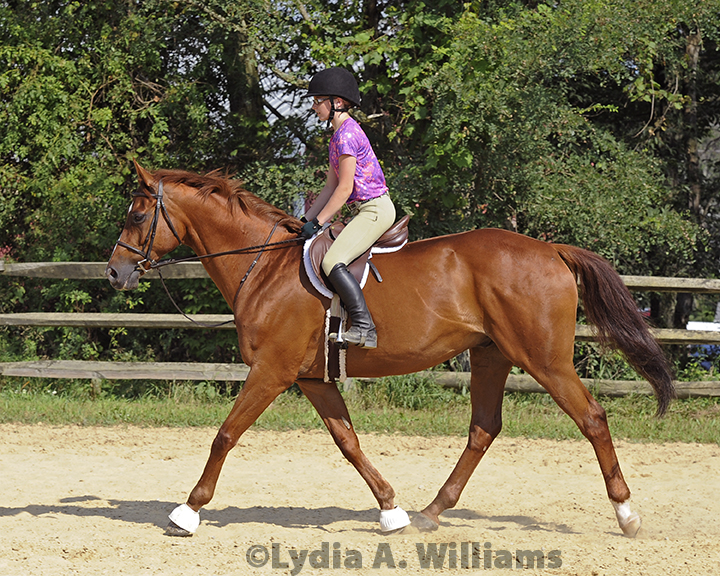 As it turned out, Evil Storm hadn’t been ridden since April and Robinson was trying to warn Simpson of the potential for disaster.

“I just hopped on him and hacked him around as if he’d been ridden the day before,” Simpson said. “He was just a doll.”

That afternoon was enough to convince Simpson to speak up and put in her bid for Evil Storm. She asked Robinson to give her first refusal before rehoming him. Simpson’s mother, Carol Stewart, had lost her own horse a few years before and had yet to find a suitable replacement.

“Evil Storm was such a people pleaser. I thought he would be perfect for my mom. She met him a couple of weeks later and we ended up taking him home. She did not like the name Evil so we call him Storm. She thought that was very negative for such a sweet horse. I always loved Evil because it was so totally opposite of what the horse was. I like the irony of it.” 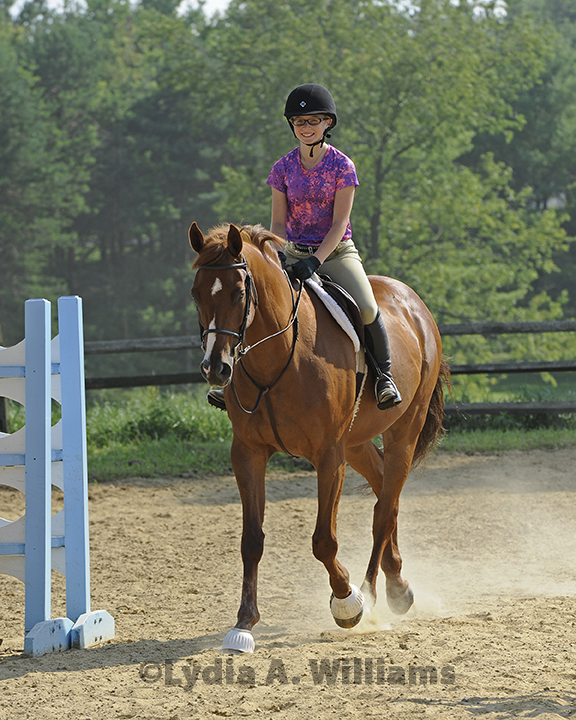 “She said ‘Well let’s go get him!’ Her pony is 14.1 and Storm is a solid 16.1. She tacked him up, didn’t want my help or anything–and off she went. I took a video of her cantering him, being the perfect gentleman. I have never seen such a happy horse. Ears are up all the time. He’s totally a people horse. You walk into the barn and he’s like ‘Me! Me! Me! Me! Me!’ He has a home with us for life. All three generations just love him.”

Rose is pleased to hear that his old pal found such a great situation.

“I saw a video of him and it looks like he’s doing great. He might even be better at this second career than he was at the last one.” 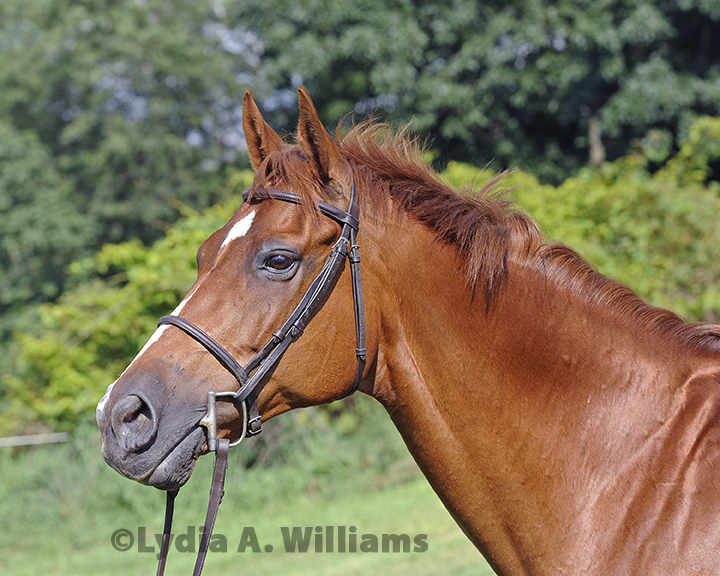