Details
From May 2016 Issue
Written by Maggie Kimmitt 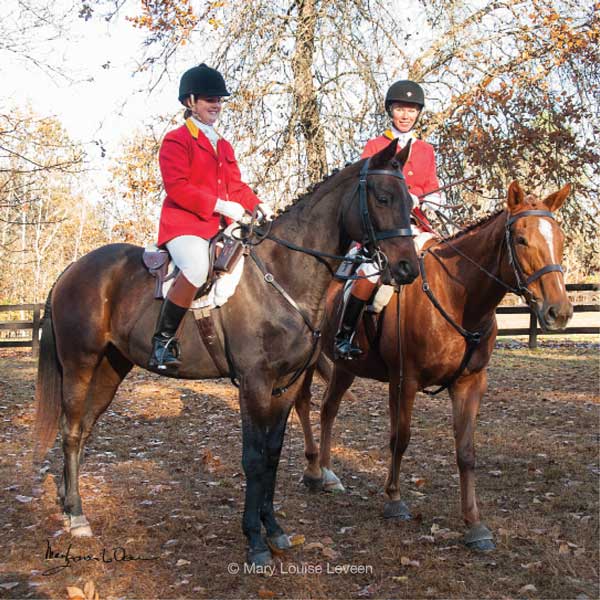 It was definitely not a case of love at first sight. When Meredith Somerset met Riddle, she was much more taken with the other two horses who had arrived on the van with him.

Standing less than 16 hands without a white hair on him, Riddle was much less eye-catching than his travelling mates.

“He was just a plain, little brown horse and he didn’t do much for me,” she said.

These days, Somerset can’t stop talking about the 15-year-old gelding who, she says, has become the standard by which all other horses are measured.

Somerset didn’t realize it at the time, but she and Riddle had crossed paths before. Attending the 2010 Colonial Cup steeplechase at Springdale Race Course, the Camden, S.C., resident was captivated by a horse on the card named Sunshine Numbers. Owned by Sue Sensor and trained by Arch Kingsley, Sunshine Numbers won a starter allowance by a length over his stablemate, Riddle.

Wrapping up a successful reinvention over hurdles that day after two seasons at the flat tracks, Riddle had begun his career with legendary trainer Allen Jerkens. Out of the Eastern Echo mare Clarify, Riddle was bred in Kentucky by Joseph V. “Jerry” Shields Jr. Shields had also bred and raced Riddle’s sire, the multiple graded stakes winner Wagon Limit, who won the 1998 Jockey Club Gold Cup-G1 for Jerkens.

Racing three times in New York as a 2-year-old in 2003, Riddle was sent to Florida for the winter and broke his maiden within the first few weeks of 2004 at Tampa Bay Downs for trainer Chuck Simon. Forwarded to Graham Motion’s barn at Fair Hill Training Center that April, Riddle scored a win but had otherwise modest results for the remainder of 2004.

In June 2005, Riddle made his debut over jumps at Colonial Downs with Kingsley and his new owner, Bill Price’s High Hope Stable. Second that day, Riddle won his next three.

He won the Founders’ Cup Hurdle Stakes at Little Everglades in March 2007 and made two starts in graded stakes company before an injury sidelined him in late April. After a three-year absence, Riddle returned to the races in 2010 for Kingsley and new owner Sensor, making six starts–including the spin around the Camden course with Sunshine Numbers.

“He’d had a slab fracture of his accessory carpal bone in his right knee, so he got a little time off after that,” Somerset said. “Sue didn’t want to see him end up in the wrong hands and get run into the ground. Sunshine overshadowed Riddle, even though Riddle is a fabulous horse. So Sue retired him.”

The original plan was for him to retrain as Sensor’s foxhunter. After some downtime at Kingsley’s, he was sent across town to Jim Wooldridge’s Timber Creek Farm where Wooldridge’s daughter, Sara Dill, would remake him for the field. And that’s when Riddle and Somerset were formally introduced.

“I was there the day Sara brought him to the farm. She had three bay geldings in training; two were Sue’s. I liked the other two better; just their personalities. Sara was always singing his praises–he was such a great mover, so smart. But I was like ‘Meh, yeah, whatever.’?”

“I think you guys get along really well,” Sensor told Somerset. “He’s used to you and there’s nothing I’d rather him have than a great home with someone who loves him.”
A small animal vet for a practice in Lancaster, S.C., Somerset grew up foxhunting in Rixeyville, Va., and actually shares another common thread with Riddle’s former trainer Kingsley.

“I have a really weird connection with Arch because my stepdad and his dad were pilots together. They flew together for years. My stepdad used to get a bunch of his foxhunters from Arch Sr., and when he found out I was moving to Camden he mentioned that Arch Jr. trained down there. He told me to call Arch because he always has such great horses.”

In the three years since buying the gelding from Sensor, Somerset and Riddle have left very few stones unturned. They’ve whipped for the Camden Hunt, competed in hunter trials, ponied and mentored young horses in training at Timber Creek Farm. In late March, the pair represented the Camden Hunt at hound performance trials in Southern Pines, N.C.

“Every hunt brings five of their best hounds and a different huntsman hunts them. There were about 140 people riding in the field–judges, whips zooming in and out. It’s a lot of action and craziness. It was so much fun, and Riddle was great.”

Somerset calls her partner “The Camden Horse” because so many local horseman remember his racing days.

“People are always coming up and telling me what a fabulous horse I have and how much they loved watching him when he was running. And that’s one of the things I love most about Camden. There is such a sense of community here.”

The community still follows Riddle enthusiastically in all of his endeavors. And his next undertaking will be no exception. On June 20, Somerset and her mother will load Riddle and another mount in their trailer and head to South Dakota for a two-week camping trip.

“It’s quite the adventure going out there,” Somerset said. “It’s a solid two days driving. We’re pretty good at it. Somebody’s sleeping at all times, and we rotate drivers. I took a younger, greener horse out there last year.”

This time, it’s Riddle’s turn. He has accompanied his owner for some local camping, but this will be his biggest trek to date. Somerset’s not worried.

“Riddle is phenomenal. Just go anywhere, do anything, throw him on the trailer and he takes his job very seriously. He’s such a professional and does everything with great style. Everything he touches turns to gold.”