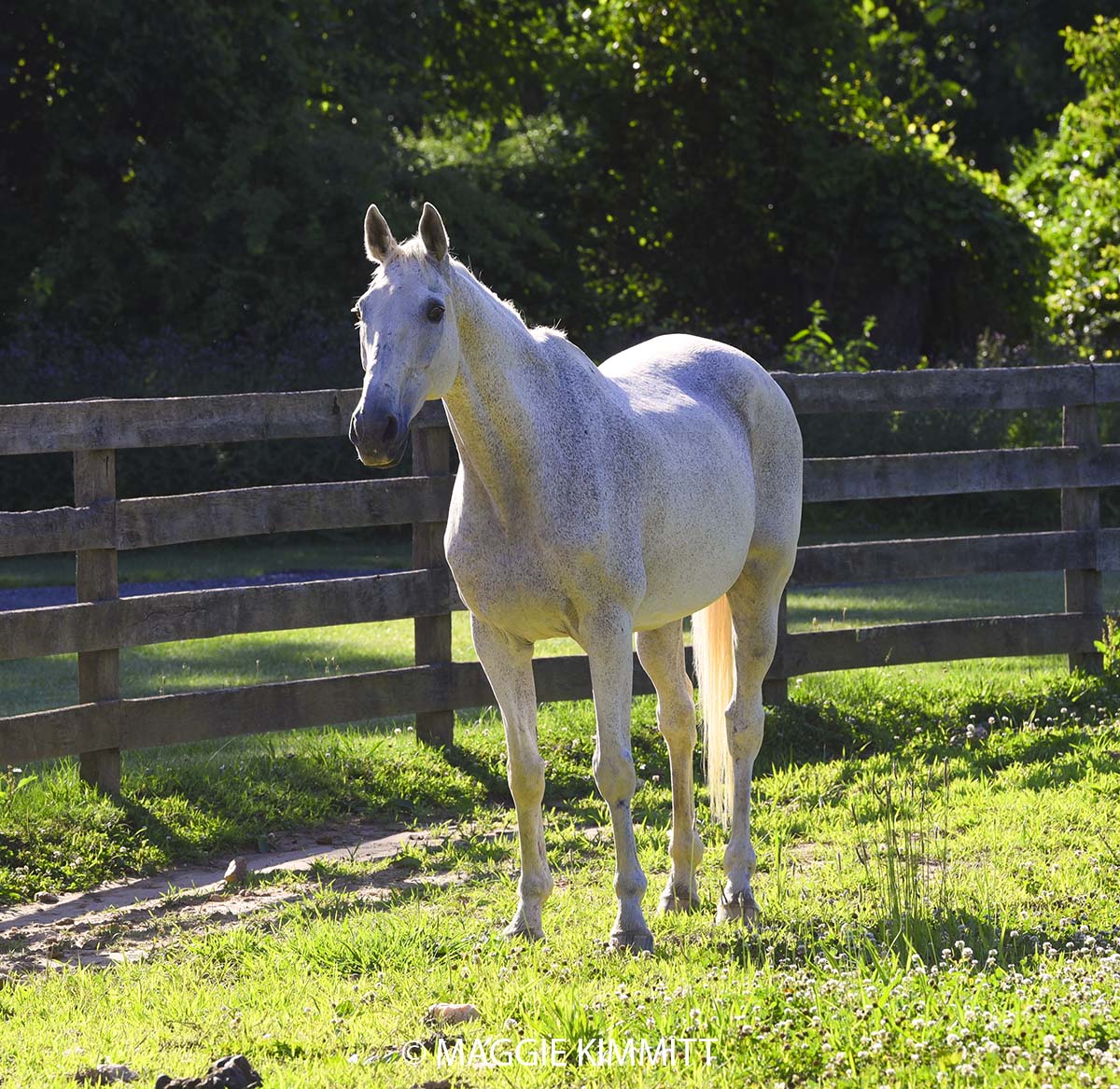 A small procession of cars filed up the manicured lane at Renee Townsley’s Greystone Farm in Monkton, Md. Jack and Sheila Fisher emerged from their car. Sheila’s parents, Rufus and Sheila Williams, parked theirs a few feet away. Loaded with carrots, the group walked into Townsley’s so-clean-you-could-eat-off-the-floors barn.

Townsley brought a tall and elegant, yet flea-bitten, gray out of his stall and the visitors circled around, beaming.

“Is that him?” Rufus Williams exclaimed. “He doesn’t look a day older!”

It had been 15 years since the connections had seen Push and Pull. Still spry and animated at 30, the Maryland-bred gelding was very much a Williams/Fisher family affair during his racing career.

Townsley took the horse to the broad expanse of lawn outside the barn, handed the shank to Sheila Fisher and stepped back to listen as Jack Fisher began to recall memories. As he spoke, Push and Pull tugged Fisher’s wife around in search of that perfect pick of lush grass.

“He came from Ronnie Houghton and was bred by Bob Meyerhoff. My feeling was he wasn’t fast enough to win over hurdles so we ran him over timber. We got him because we had a horse named Call Louis who was a full-brother to this horse’s dam, Jump. Call Louis won the Virginia Gold Cup in 1989 and worked out well for us.” 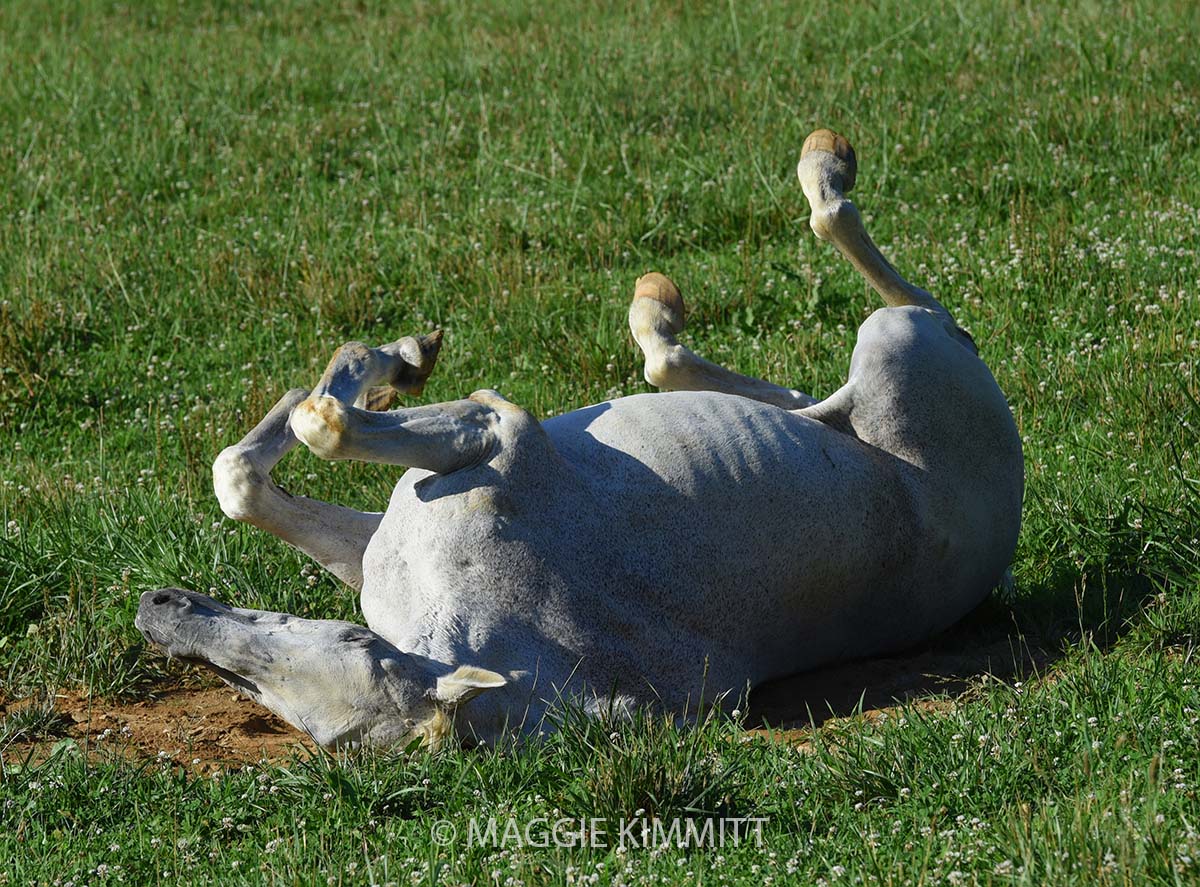 Call Louis did a lot more than that for the Fishers, winning all six of his starts in 1989 en route to the National Steeplechase Association timber championship. His sister Jump, another homebred for Meyerhoff, was by graded stakes winner Ecole Etage who was from the same foal crop that produced Secretariat in 1970. When bred to Secretariat’s arch-rival Sham, Jump produced Push and Pull on March 25, 1986.

Unraced during his freshman season, he made four starts on the flat as a 3-year-old in 1989, never breaking his maiden. The next year, he became that rarest of Thoroughbreds – a 4-year-old timber horse. Owned by theWilliams family’s Dover Ridge Farm, he won point-to-point starts at Howard County and Elkridge-Harford, then went to the Virginia Gold Cup’s crucible of a maiden timber race.

Push and Pull fell while in front of a big field. “It’s not really a brilliant idea to go to the lead with a first-time starter,” said Fisher, after 26 years of reflection.

They pulled it together for their next start that September at Fair Hill, finishing second by a neck to future timber champion Joe’s O.K. The third time proved the charm. Fisher and Push and Pull won at Great Meadow the following month, and then repeated at Montpelier to close out their 1990 season that November.

Push and Pull missed 1991, but returned to the races at 6 in 1992. He won a point-to-point prep at Orange County in March, then captured the historic My Lady’s Manor timber stakes over 10 others including the previous year’s Pennsylvania Hunt Cup winner Pleasant Sea and two-time Manor winner Von Csadek. The victory resulted in a still-standing course record 5:56 for 3 miles.

Back at Great Meadow, scene of his NSA debut two years earlier, Push and Pull dominated the 4-mile Virginia Gold Cup – winning by 8 lengths over 13 rivals. He raced just once more, the Radnor Hunt Cup two weeks later, and was pulled up.

Told by their vet that Push and Pull’s tendon and sesamoids looked “moth-eaten,” the parties all agreed that the gelding had run his last race. In a family of avid lifelong foxhunters, the horse’s second (third?) career was never in question. So the lightly raced Push and Pull (11-4-2-0) took his $44,736 bankbook home to the Fishers’ farm and called it a day.

He did a stint with friends near Far Hills in New Jersey: “his time with the rich and famous,” Jack said. He also spent time with Ned and Cindy Halle. Ned whipped off him with the Green Spring Valley Hounds and Cindy showed him a bit.

“We couldn’t believe that,” Sheila said, “He looked at everything, which made him a good timber horse because you could gallop him into anything. And he jumped everything the same. You couldn’t steer him or stop him, but if they were galloping...”

Both Sheilas – Fisher and Williams –rode him in the hunt field. And everyone remembers him as a character with strong opinions.

“When we first had him, he was at our place on Houcks Mill Road,” Sheila Fisher said. “We just had two fields. And there was much better grass, hay, everything on the other side of the board fence. And he would jump out, eat, and then jump back in.” 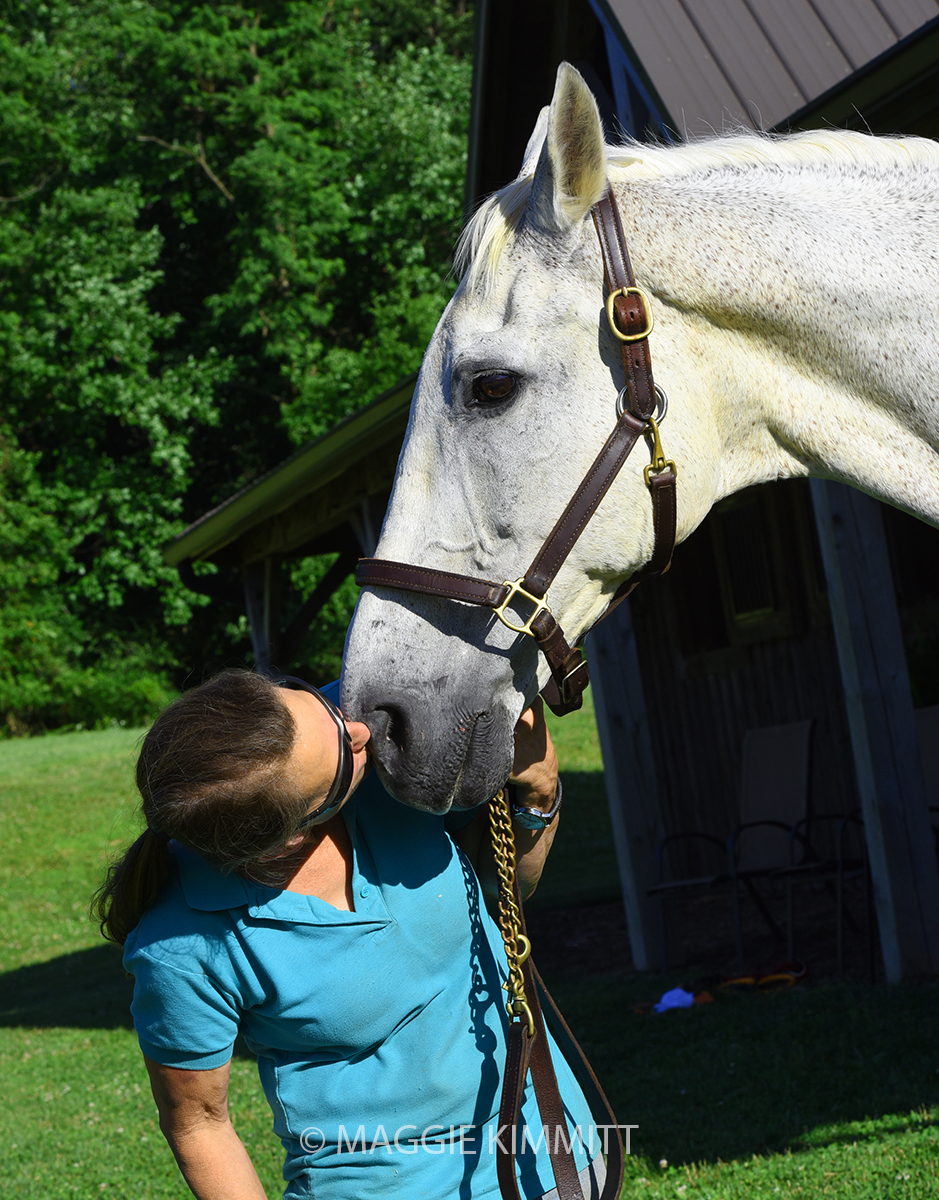 Townsley has had him for the past 13 years.

“He has never taken one wrong step,” she said. “He’s so kind, so well-mannered. He’s just a really cool horse. I foxhunted him a bit, trail rode him a lot, took some lessons with him.”

Townsley still remembers the advice given her by longtime friend and steeplechase trainer Billy Meister when Push and Pull first arrived at her farm.

“Billy said ‘Do not interfere with that horse. He’s the nicest jumper you will ever sit on, and he knows way more than you do.’ I’ll never forget that.”

Their time together was nearly cut short about 10 years ago. Before purchasing her farm, Townsley had boarded “Pushy” at a farm in the area. He was turned out with a Mustang who was “a little aggressive about the round bale,” she said. They had a bit of a showdown one day and the Mustang kicked Push and Pull in the shoulder, fracturing it.

“He had been in for six weeks and he was still in a lot of pain, and he wasn’t the best patient; he was so spirited. So I had scheduled to put him down because I just couldn’t stand seeing him that way. But that day he literally pulled me out of the stall into the field – and I was waiting for my vet to get there. So I called her and I said ‘Today is not the day for him.’ And 10 years later here he is.”

Bobbi Budnick and her partner Roger Simmons have worked with Townsley for several years and know the horse well.

“Bobbi is the other mother in the barn,” Townsley laughed. And Bobbi’s affection for the big gray horse is evident.

“He’s just an awesome horse,” she said. “He’s got such a huge soul, a great spirit and a heart of gold. He’s kind, but ornery if he wants to be. And he can still outrun everything else on the farm.”