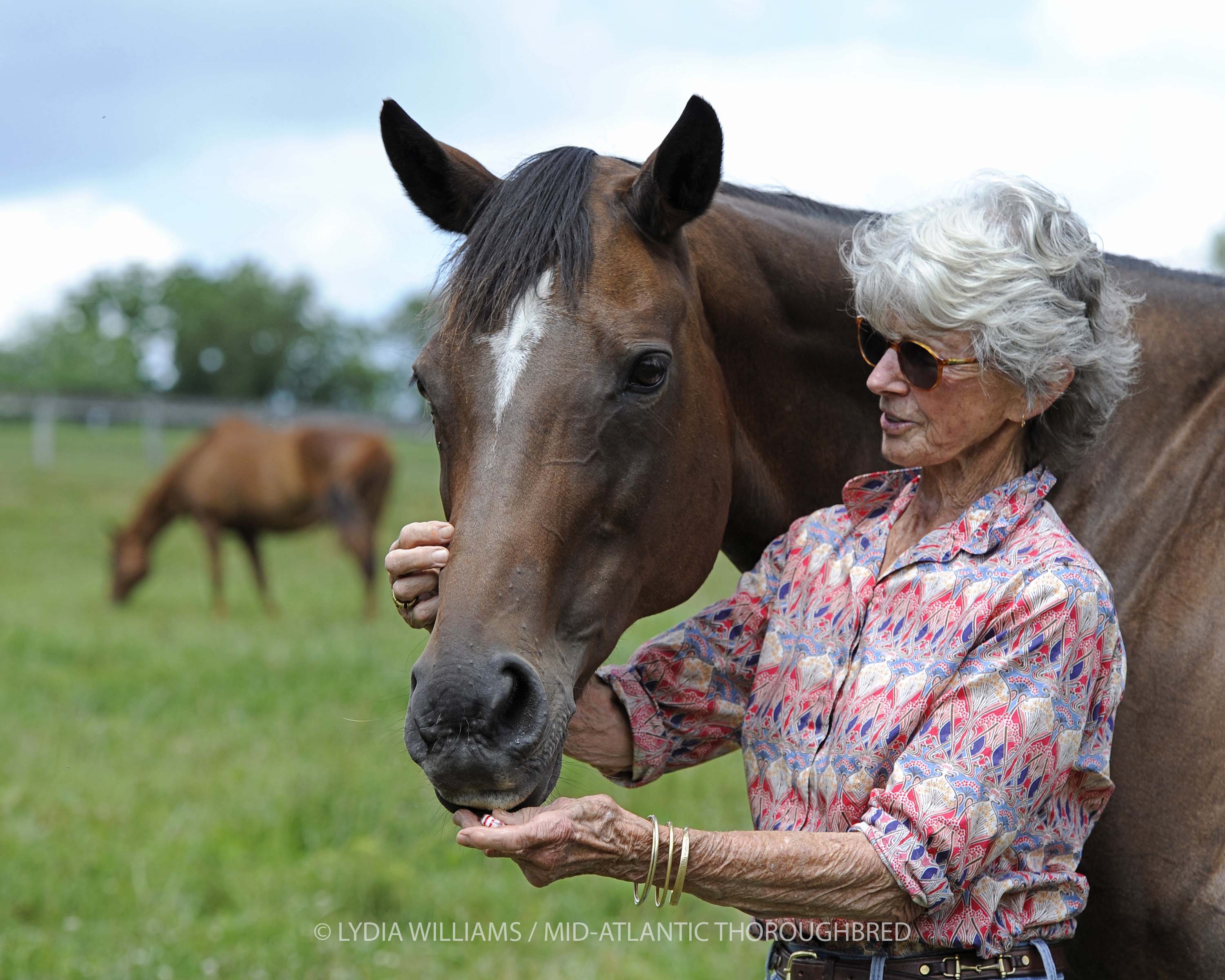 It’s an oft-repeated scene. A caring, responsible breeder/owner walks into a field and points out a cherished, pensioned broodmare. She tells of how much the horse has meant to her family and her entire operation. These are the good stories; the happy endings.

This particular case, however, is just a bit special. The owner is Gretchen Jackson of Lael Stables, and the mare is La Ville Rouge, dam of Barbaro.

Jackson leads the way and points to the bay mare grazing farthest away. The rest pick up their heads, intrigued by approaching visitors. Initially, La Ville Rouge keeps to the task at hand, disinterested.

Belle Cherie, 20, also won the Top Flight as well as the Turnback the Alarm and Honey Bee Handicaps and Miss Grillo Stakes, all Grade 3s. She is the dam of multiple stakes winner Beau Choix, now at stud in Florida.

Long before she produced the iconic Kentucky Derby winner and his four full-siblings, La Ville Rouge was purchased privately by Jackson and her husband Roy as a 2-year-old in 1998.

By Carson City out of the King’s Bishop mare La Reine Rouge, she was bred in Florida by Givens Farm. Originally sold as a yearling at Keeneland in 1997, she was purchased by John B. Penn for $42,000. Penn pinhooked her six months later at the Ocala Breeders’ select 2-year-old sale, and Maycroft Farm signed the ticket for $130,000.

She carried the Maycroft silks in her first four starts at 2, breaking her maiden at Belmont Park in her third attempt and then finishing second in the Grade 3 Tempted Stakes. She caught the attention of the Jacksons, and she joined their racing stable. Her first start in Lael Stables’ green and blue came in the 1998 Demoiselle Stakes-G2.

She finished sixth behind Tutorial, who was disqualified and placed fifth. The filly who was put up for the win would herself become quite the producer – Better Than Honour, dam of Rags to Riches and Jazil. 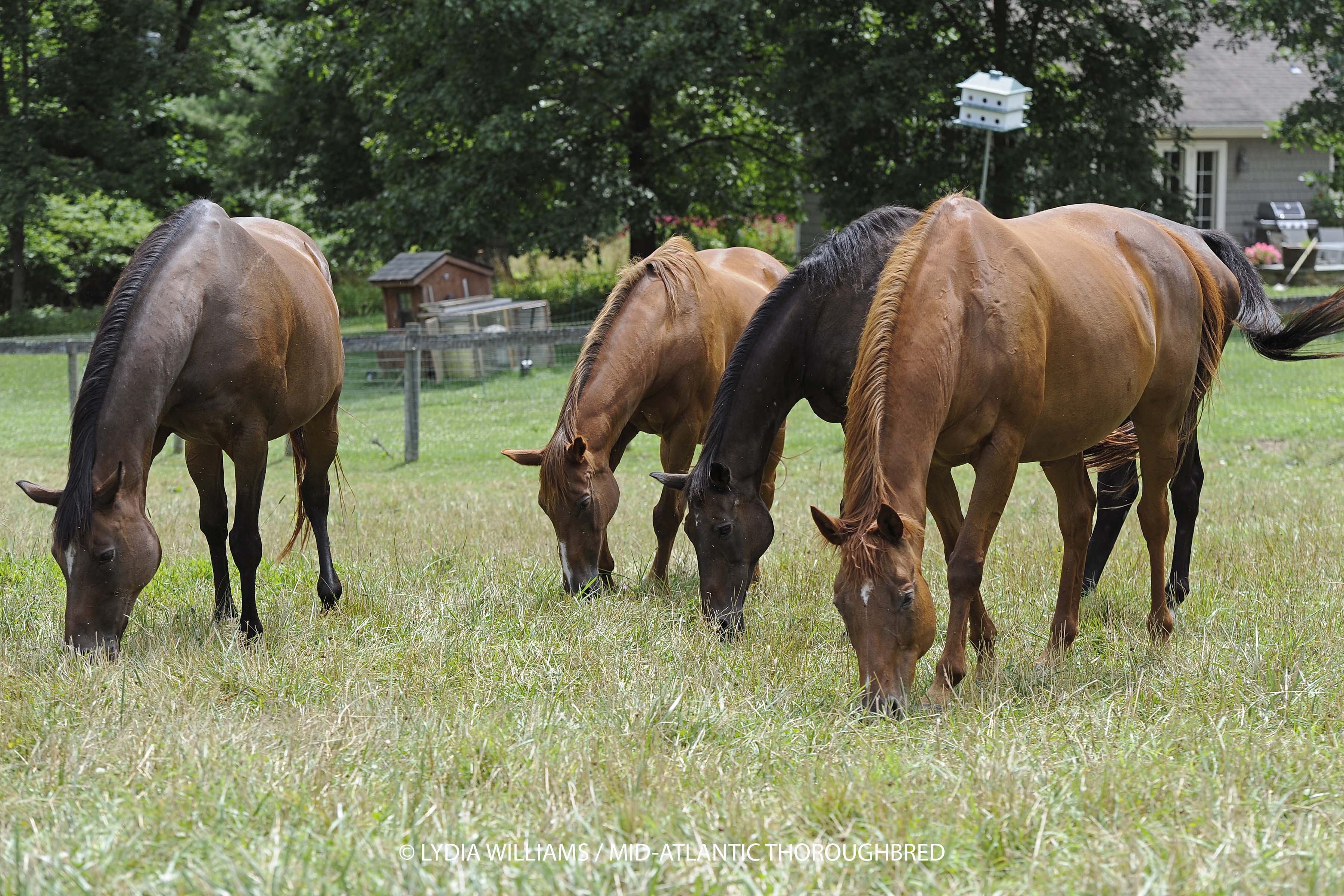 The female foal crop of 1996 issued a few notables, in fact. La Ville Rouge also headed postward with Tap Your Heels, dam of Tapit, and multiple graded stakes winner Oh What a Windfall, victorious in the 1998 Matron Stakes-G1.

At first trained for the Jacksons by Phil Serpe, La Ville Rouge spent time in the barn of Graham Motion before moving to veteran New York conditioner and Hall of Famer P.G. Johnson.

Johnson kept the filly busy during her 4-year-old season in 2000; she ran in seven graded stakes at Aqueduct and Belmont Park. She won two allowance races, finished second in the Noble Damsel Handicap-G3 and third in the Grade 2 Sheepshead Bay and Long Island Handicaps. She retired at the end of that season after 25 starts and a 6-3-4 record, earning $262,594.

She joined the Jacksons’ band of broodmares, then kept at Mill Ridge Farm in Lexington, Ky. Sent as a maiden to Saint Ballado, she foaled a chestnut colt in 2002. Named Holy Ground, he made nine starts and earned $98,280. Among his three wins was Delaware Park’s Stanton Stakes in 2005.

It was her next breeding that would change not only Thoroughbred racing as a whole, but the course of the Jacksons’ lives.

“We used to sit down and discuss it all with Headley Bell [at Mill Ridge], and I think that’s probably where we started when she retired,” said Roy Jackson. “I think she was the first mare we bred to Dynaformer.”

“He was like an ugly duckling as a baby; he was gangly. And he really bulked out,” Gretchen Jackson said. “He grew the muscles over his frame. You knew he had to grow into himself. As a weanling, he got a splint on his foreleg and had to stay in the barn for probably two weeks. And he handled it. Was that an indication he was smart? I think it was.”

“They sort of developed between yearlings and 2-year-olds,” her husband added. “They were all heart.”

Barbaro demonstrated that trait quickly, winning a maiden special weight at Delaware Park in his first start in October 2005. Trainer Michael Matz wasted no time, sending him to Laurel Park for the historic Laurel Futurity. It was a repeat of his debut, another easy score.

On to Florida for his sophomore campaign, he reeled off consecutive grand performances in Calder’s Tropical Park Derby-G3 and Gulfstream’s Holy Bull Stakes-G3 and Florida Derby-G1.

On May 6, 2006, the undefeated colt headed to the paddock at Churchill Downs for the 132nd Kentucky Derby. Barbaro flew home 61⁄2 lengths ahead of the accomplished field of 20. 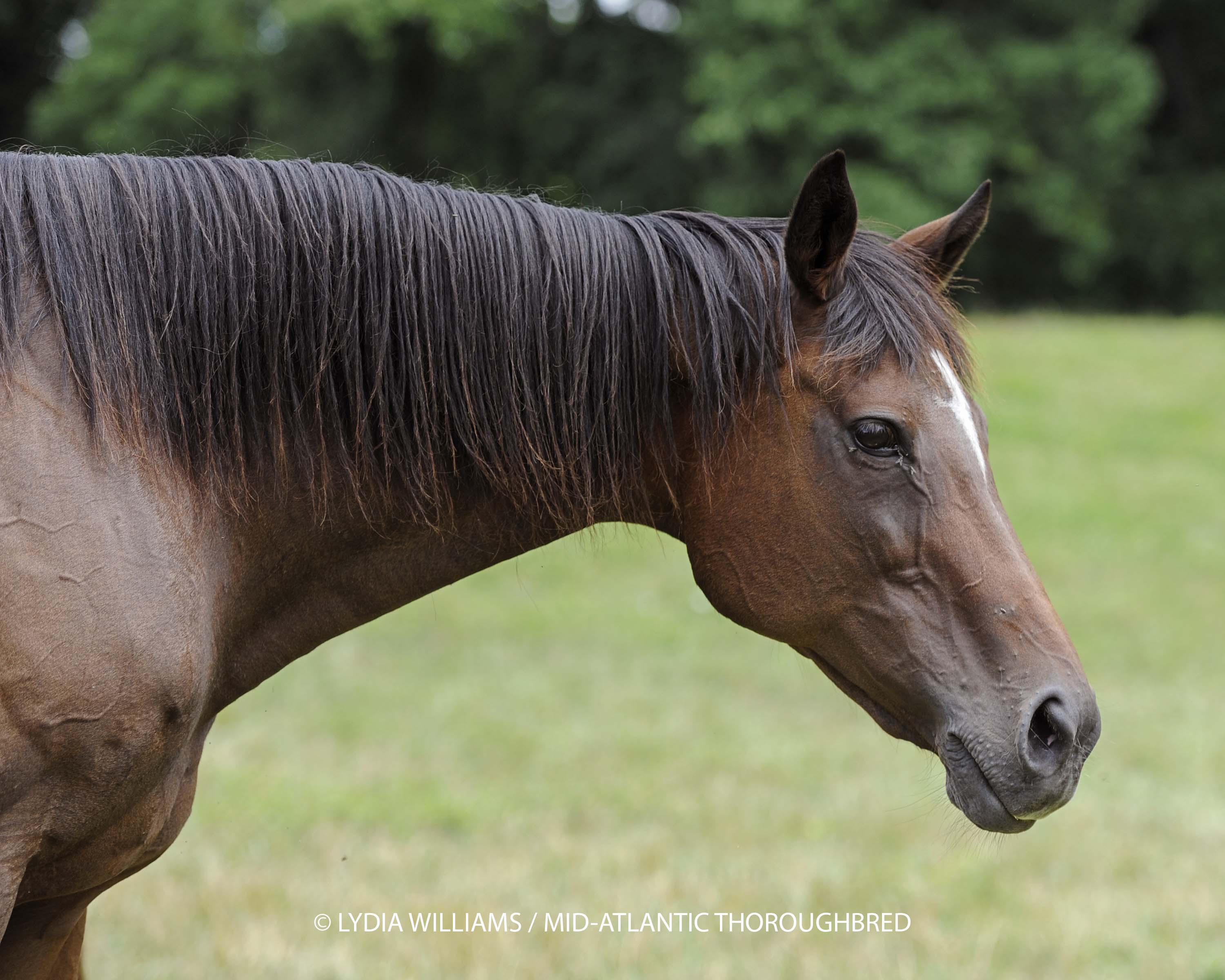 For Gretchen Jackson, there was never a question.

“Going into the Derby, I was more than certain he was going to win. I just knew it.”

A hero was exalted, a nation fell in love, and private citizens from West Grove, Pa., became instant celebrities.

Two weeks later, Barbaro’s career ended in sadness and tragedy at Pimlico in the Preakness Stakes. Extraordinary efforts were made over the next eight months to save his life, and his legion of devoted fans followed along, hanging on every word and update. On Jan. 29, 2007, the valiant colt succumbed. . . and Thoroughbred racing was heartbroken.

Multiple stakes-placed Nicanor earned $147,697 and stands at stud at Shamrock Farm in Woodbine, Md. His first foals are 2-year-olds this season. 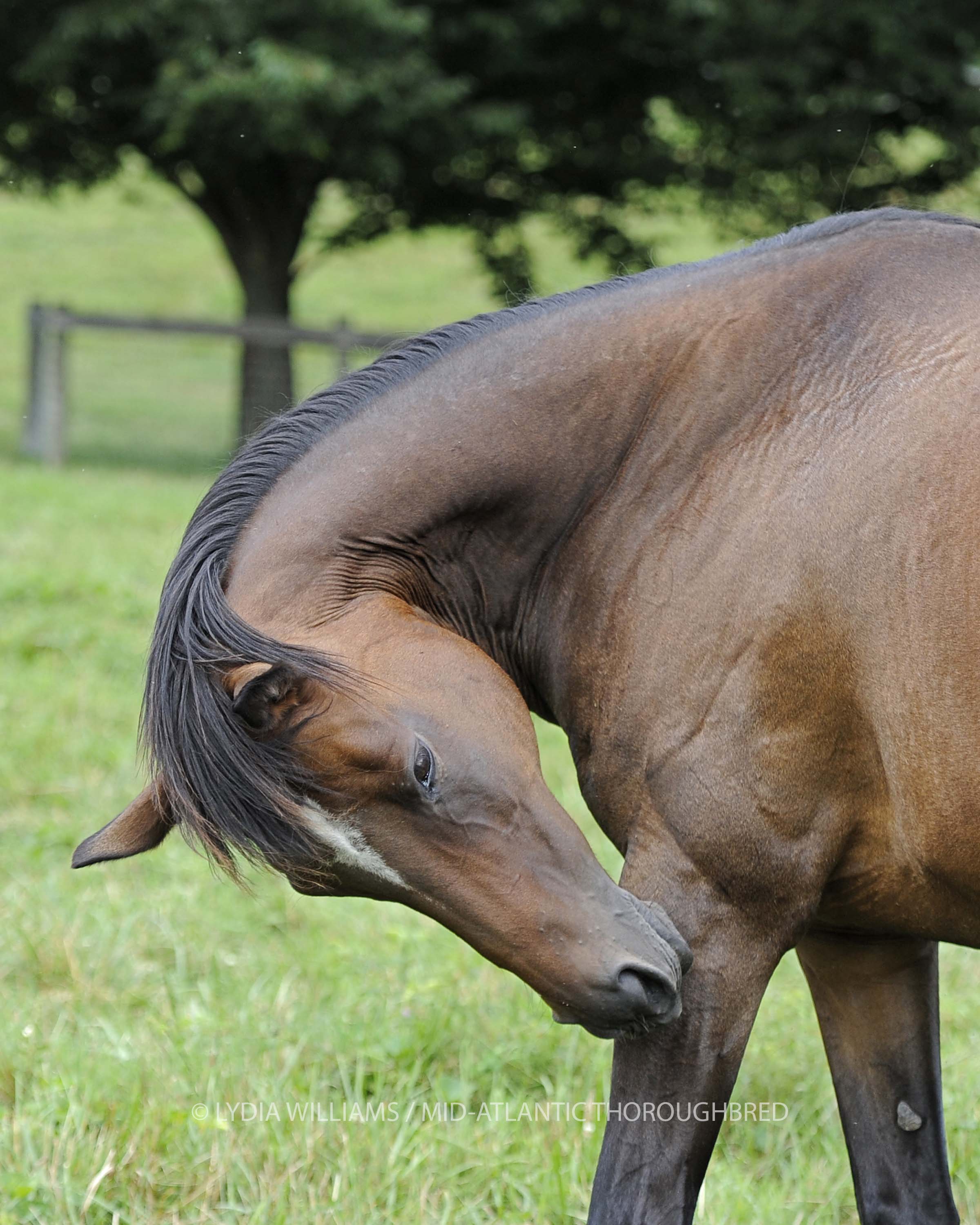 Margano was most successful of the three on the racetrack. Winner of the 2013 Eight Thirty Stakes at Delaware Park and the PTHA President’s Cup Stakes at Parx Racing in 2014, he earned $373,969 in 30 lifetime starts. Powerfully built and dark bay like his sire, the gelding is retired at the Jacksons’ Lael Farm where his constant companion is another of their best runners – Showing Up. After a brief career at stud, the latter, a millionaire Grade 1 winner now 13, was gelded and returned to the Jacksons.

To this day, the Jacksons still hear from countless numbers of the “Friends of Barbaro,” a massive network that formed during the champion’s ordeal.

“They write, send flowers. We hear from them a lot and it’s all positive. ‘What can we do to increase safety?’ they ask,” said Gretchen. “Everybody wants that. Most of these people have been in touch for over 10 years and have followed all of his brothers.

When I go to Belmont they say ‘Hi Mrs. Jackson!’ I don’t know who I’m waving at but it’s nice that he’s well thought of.”

For her part, the memories closest to her heart are those of her remarkable Barbaro at his very best. Those are the moments on which she prefers to focus.

“The Laurel Futurity was one of my very favorite races,” she said. “It was as special as the Derby. He won it for fun. . .he was sparkling. That’s the Barbaro I want to remember.”

Out in that field, La Ville Rouge grazes. 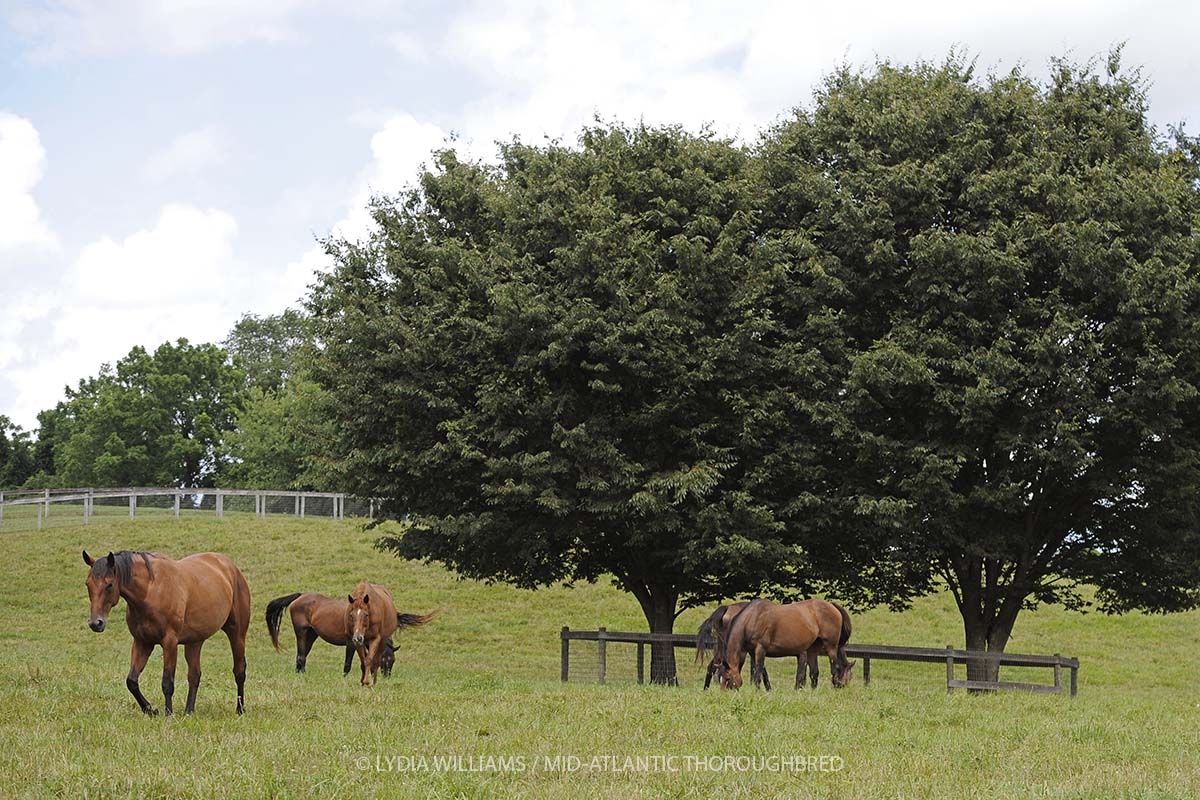