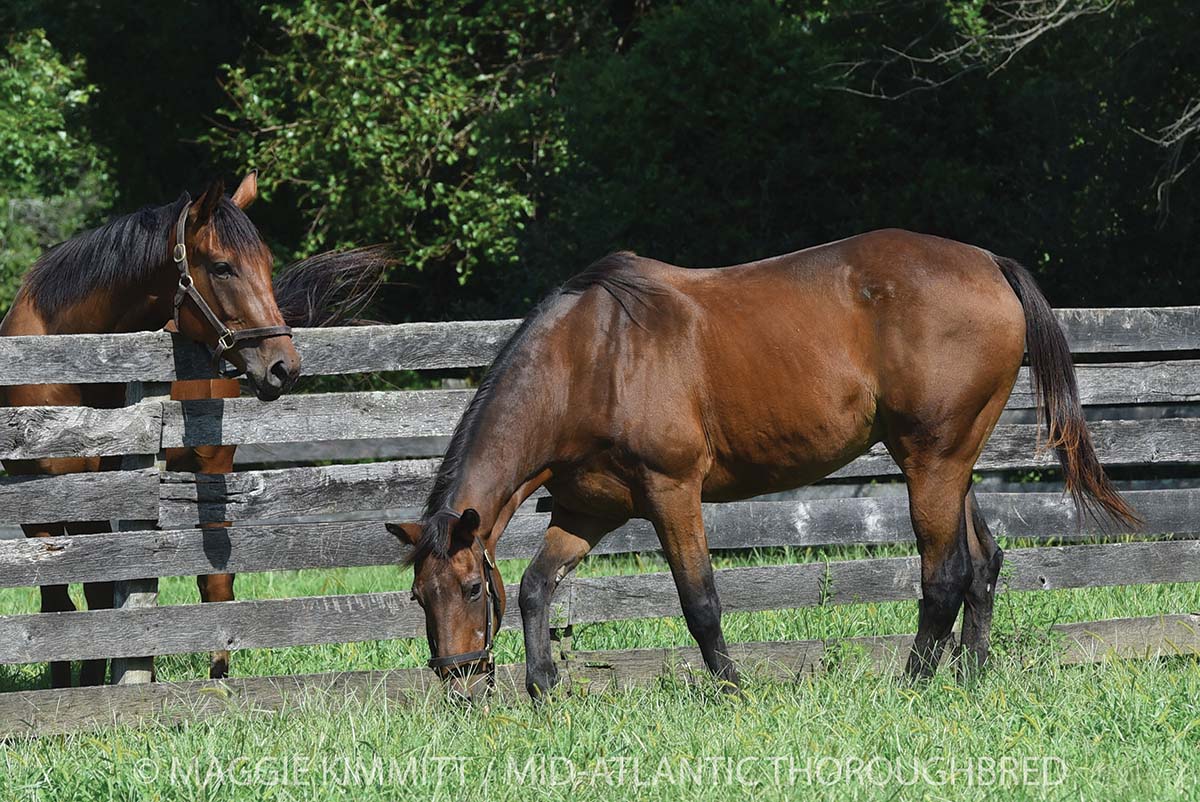 In 1989, Tim Woolley headed to Delaware Park’s paddock sale with a modest bankroll and an eye toward launching his training career. Woolley had by then been freelancing as an exercise rider at Fair Hill Training Center and Delaware Park for two years, and one of his regular mounts was a 3-year-old filly named Shakin All Over in the barn of Patti Miller. When word came that the Florida-bred daughter of It’s Freezing and the Navajo mare Andthebeatgoeson had been consigned, Woolley thought the small but gritty filly would be a great first project.

“It was a horses-of-racing-age sale held over in the hacienda,” he said, of the former Brandywine Stable property adjacent to the stable area. “It was always toward the end of the meet in the fall. Trainers based there would just have a yard sale so to speak. There were maybe 100 horses. I bought her for myself; I was trying to get into the game a little bit and thought she might be a cheap one just to mess around with.”

The young native of Derby, near Birmingham, England, had come to this country in 1987 to work for trainer Michael Dickinson, then also at Fair Hill.

“In England I was trying to be a steeplechase jockey, but it’s like anything,” Woolley said. “You’ve got to have the rides, and I’d gotten to be an also-ran so I thought it was time to do something different. I stayed the summer here and just really scouted out what I wanted to do, then went home for the winter and came back.”

Woolley started out galloping in the mornings and then began breaking babies in the afternoons. As the youngsters progressed, they would frequently make their way back to Woolley for their continued education, preparation and gate cards. He and wife Penny, whom he met while she was working for steeplechase trainer Janet Elliot in Oxford, Pa., rented a few stalls at Fair Hill for their growing outfit.

Penny was with Tim at Delaware the day he purchased Shakin All Over.

“I think we paid like $600 for her. And I guess at the time I thought I liked her aggressiveness,” Tim said. “But the more you’re around horses, you learn that aggressiveness doesn’t always relate to performance on the track.”

Shakin All Over ran just a few races for her new ownership (and under the name of trainer Sharon Clark) as a 4-year-old in 1990 before that aggressiveness became her undoing. Coming off the track at Atlantic City that July, she started cutting up and jumping around, resulting in a condylar fracture of an ankle.

Faced with a “What do we do now?” predicament, the Woolleys decided against surgery and opted for stall rest. The ankle healed over time, so the next logical discussion concerned her future as a broodmare.

She had won just one race in her career – not for the Woolleys – and earned $5,081. But she had demonstrated enough toughness and determination to convince them to try.

“The first stallion we went to was Iron. We got a filly out of that whom we named It’s Ironic [six starts, six losses]. Then the second time we went to breed her, I took her to Northview Stallion Station [in Chesapeake City, Md.]. Baederwood, whom we’d gone to, wasn’t very fertile at that time. And that’s when they said to me ‘We’ve got this new young stallion, you might want to try him.’ And it was Not For Love. So we got him the very first year he stood.”

The resulting foal was a Pennsylvania-bred filly they called Allure l’Amour. She won two races for them before being claimed at Penn National in 2003.

The Woolleys gave careful consideration to Shakin All Over’s future in the breeding shed. Both operated under the firm conviction that not every mare needs to reproduce. She was on the small side and despite being bred to larger stallions, her foals had not been big.

Neither had much success.

“You see these 20-year-old mares who’ve had 10, 15 foals. And very often nothing will have even gotten to the races or earned anything, but they keep breeding them . . . and you have to ask why,” said Tim. “After two foals from her I could see enough to know. Both were kind of small. One ended up being by the leading sire in Maryland. But it was like ‘well, if she’s not going to produce anything, then why bother?’ ”

Faced with that situation, many owners would never have kept Shakin All Over. But the Woolleys always managed to find useful work for her. She served as Tim’s lead pony on the farm and helped break babies. She was the quintessential babysitter when new, timid youngsters arrived.

Now 30, “Shaky” lives on the small property the Woolleys rent for their horses near Fair Hill. It’s the perfect set-up, with several paddocks, a 4-stall barn and a large run-in shed. She shares the space with Tim’s two old paint lead ponies and Penny’s retired Thoroughbred projects Manighar (Fr) and Cork County, who are embarking on new careers in the show ring. Manighar is a world-traveled graded stakes winner of $3,656,834.

“We can’t believe how well she looks, and we think this is probably the best she has ever looked,” Tim said. “Penny diligently feeds her twice a day. Shaky prefers to live outside 24 hours, so we just put two turnout blankets on her in the winter. After 27 years, whatever she wants is fine.”

# Anne Mulligan 2016-10-18 13:27
Beautiful story. Love that you kept her and didn't breed her into the ground. Responsible horse ownership.
Refresh comments list