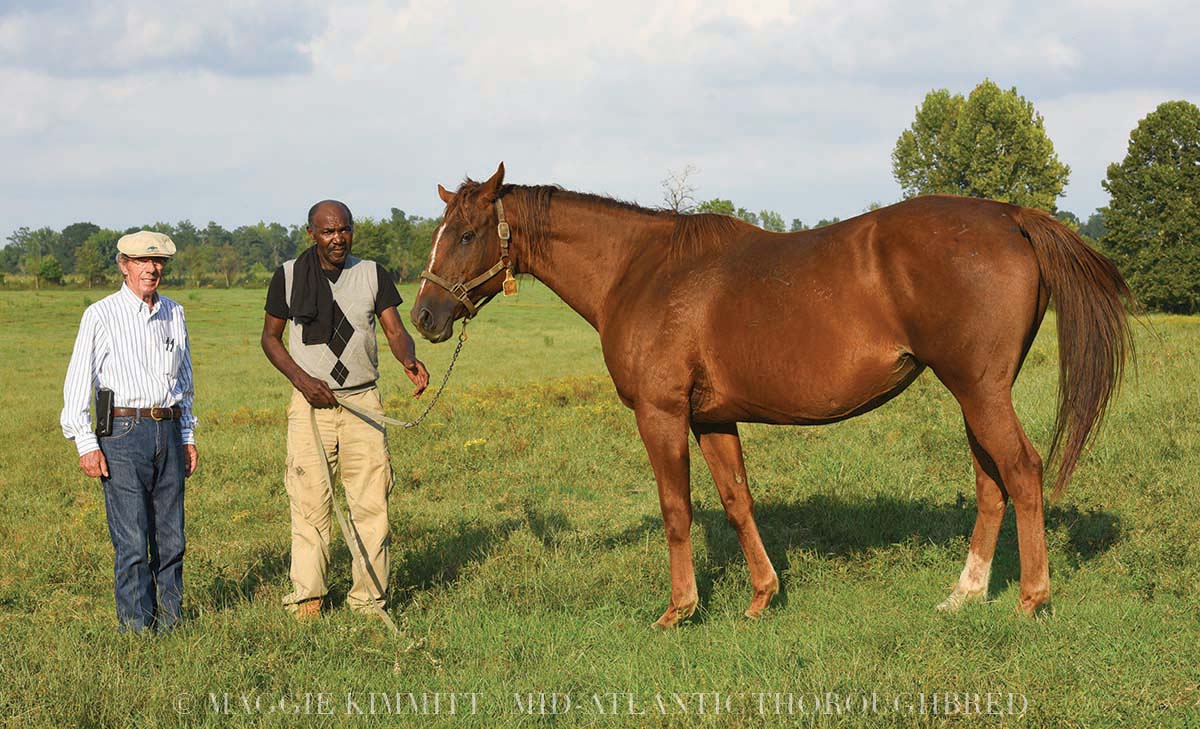 Mention the name Franklin G. “Goree” Smith Sr., and most in the racing industry automatically think of Elloree Training Center. Smith’s reputation was built on the 400-acre facility midway between Columbia and Charleston, S.C.

He’s developed jockeys; local boys Chris Antley and Malcolm Franklin made it big. And reigning Eclipse champion Stellar Wind is the most recent in a long line of stakes winners purchased and/or started by Smith and his staff –other standouts on that roster include Keen Ice, Paddy O’Prado, Dullahan, Tapitsfly, Finnegan’s Wake and Maryland stalwart Gin Talking, whose son Straight Talking and grandson Done Talking now stand at stud in Elloree.

About 8 miles from the training center on 780 acres in equally tiny Lone Star is Running Horse Farm, the family homestead originally purchased by Smith’s father, Dudley. Goree Smith and his siblings were all born and raised in the tidy brick home that marks the entrance to the property. About a mile-and-a-half from the Congaree River, it’s still a working farm, producing hay and soybeans. And it’s also home to Goree’s small band of broodmares.

A perennial leading breeder in South Carolina, he keeps about 15 mares in a 40-acre pasture at Running Horse. Many are homebreds, but a few have come his way through special circumstances. Such is the case with Stand Alone.

Foaled in Maryland in 1999, she was bred by Cleave Helsing. By Root Boy out of the Silver Hawk mare Aquiline, the dark bay filly was the culmination of a lifelong dream for Helsing and her husband Alan, known as “Butch.” Cleave was for several years the administrative assistant to former Maryland Jockey Club director of racing Larry Abbundi. She met Butch on the Laurel Park backside where he worked in the barn of Bud Delp.

“Butch did that just for something to do; he liked being around the horses,” Goree said, “and that’s how he and Cleave met. Then they got married and bought a big camper and traveled all over the country for three or four years. They toured all the national parks; they’d stop somewhere for a month or so at a time.”

Once the wanderlust had been satisfied, the Helsings settled in Southern Pines, N.C. And when the time came to break their filly, they sent her to Elloree.

“They sent her down to me as a yearling, and she had one hock that was a little thick. She was sound on it but you knew there was something there. So we X-rayed her and she had a big OCD. They were just beginning to remove them from hocks back then, but the vet suggested we’d be safer if we just waited on it. So we gave her a year. And Cleave was great about it, she’d come down every so often to see the filly.”

Stand Alone went to the Laurel Park barn of Goree’s brother Hamilton Smith. She made her debut as a 3-year-old at Colonial Downs in 2002, eventually breaking her maiden at Delaware Park in her sixth start. In a career spanning five seasons, she was effective at middle distances on dirt and turf. She was retired after one start at 7 early in 2006, taking with her a record of 29-3-7-5. Her lifetime earnings of $116,947 ranked her fourth among the progeny of her sire Root Boy, who died in 2004.

Stand Alone was left to Goree when Cleave Helsing passed away after a lengthy battle with cancer in 2007. “Cleave was a good lady,” Smith said. “We all still miss her.”

But there are plenty of reminders. The walls of Elloree Training Center are hung with several of Helsing’s watercolor paintings. One in particular depicts Smith leading an almost identical mare and foal – both dark bay with plenty of chrome – in from a paddock.

Aside from Stand Alone, there are a few familiar names sharing that 40-acre parcel in Lone Star, and one of the most recognizable is Havin’ a Moan. The daughter of Goree’s stallion Ride the Storm and the Grey Adorn mare Likearone was foaled at Elloree Training Center in 2002. And her career path bears several similarities to that of her pasture mate. Also sent to Hamilton Smith as a 3-year-old, she too broke her maiden in her sixth start, a maiden special at Pimlico during Preakness Week in 2005. 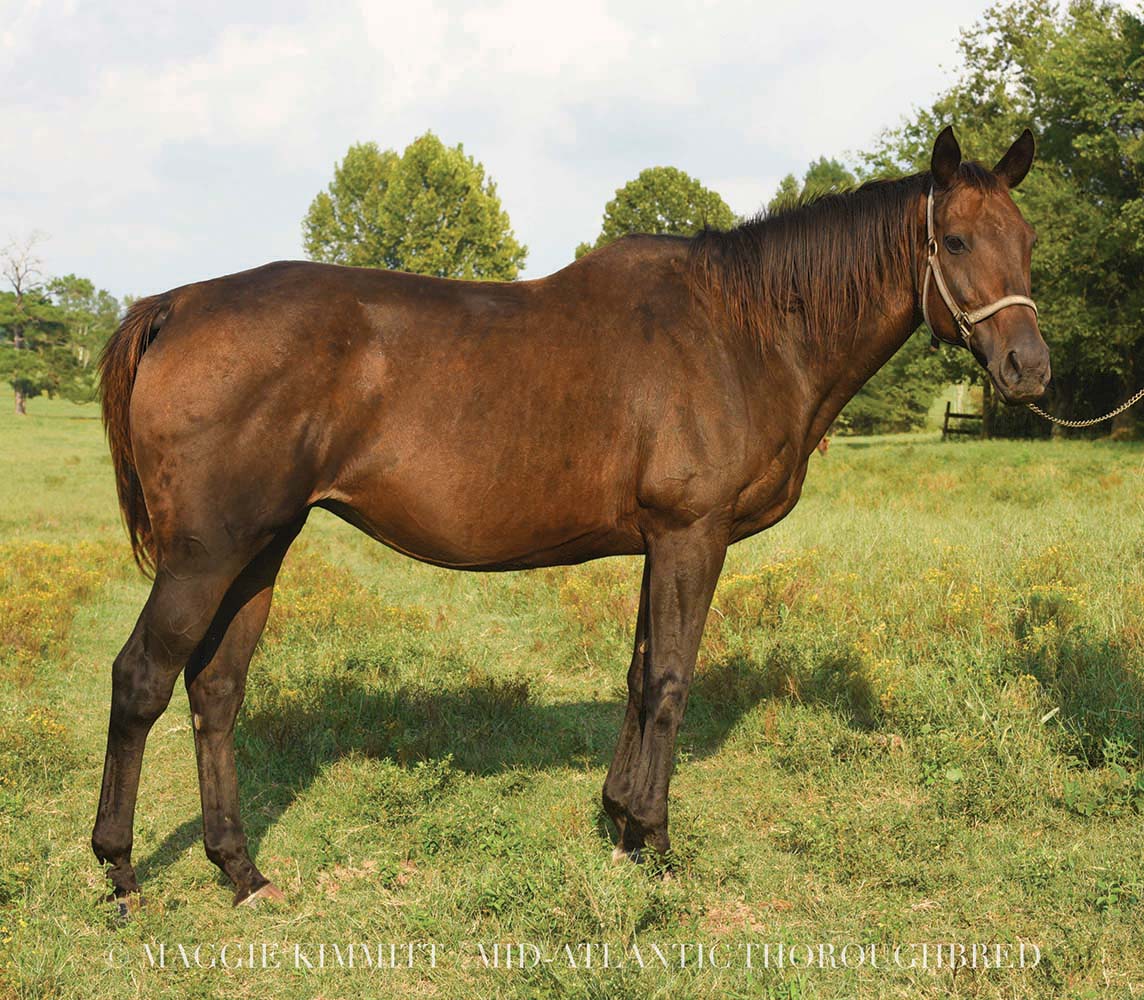 Havin’ a Moan made 15 starts on the Maryland and Virginia circuits that season, usually for a $20,000 or $25,000 tag. She won five times, was second twice and third once. The Smiths protected her in allowance company for most of her remaining two seasons on the racetrack, and she visited the winner’s circle on three more occasions before retiring after a dismal effort at Colonial Downs in July 2007. Havin’ a Moan headed home to Elloree with eight wins and $140,830 from 31 starts.

The chestnut mare rewarded her breeder/owner with year-end accolades from the South Carolina Thoroughbred Owners and Breeders Association. She was named Horse of the Year and champion 3-year-old filly in 2005 and champion older mare in 2006 and 2007, earning more crystal for Goree’s award-laden office at the training center. And in the long run, it’s the homegrown triumphs that mean the most.

“Back in the 1940s, ’50s and ’60s, you raised your horses and you took them to the races,” Goree said. “And that’s what we did well into the 1970s. We’d go home in November and turn everything out, break the babies, and then the first week of April we’d load everything up and head back up north. But then racing began to change, with winter racing and all that. So the whole concept developed away from that. Now there are these big outfits with their own farms and their own trainers. It evolved away from the way things had been done. So that’s when I knew we had to go in the direction of breaking babies and starting horses for people.”

Goree began breaking horses for clients in 1967. Within a few short years he had the barns at Running Horse full of youngsters. A full staff galloped on the 5-furlong track he had carved out on land his father farmed.

“One day my father finally said to me ‘Son, you got to find yourself your own place. You got too damn many horses here,’ ” Goree laughed. “He loved the horses, all of it. He started this farm for us, his boys.”

Both mares were barren for 2016 but are in foal for 2017. Stand Alone was bred back to Done Talking, and Havin’ a Moan is carrying one of the last foals of Goree’s stallion Hugo, who passed away from a heart attack this year.