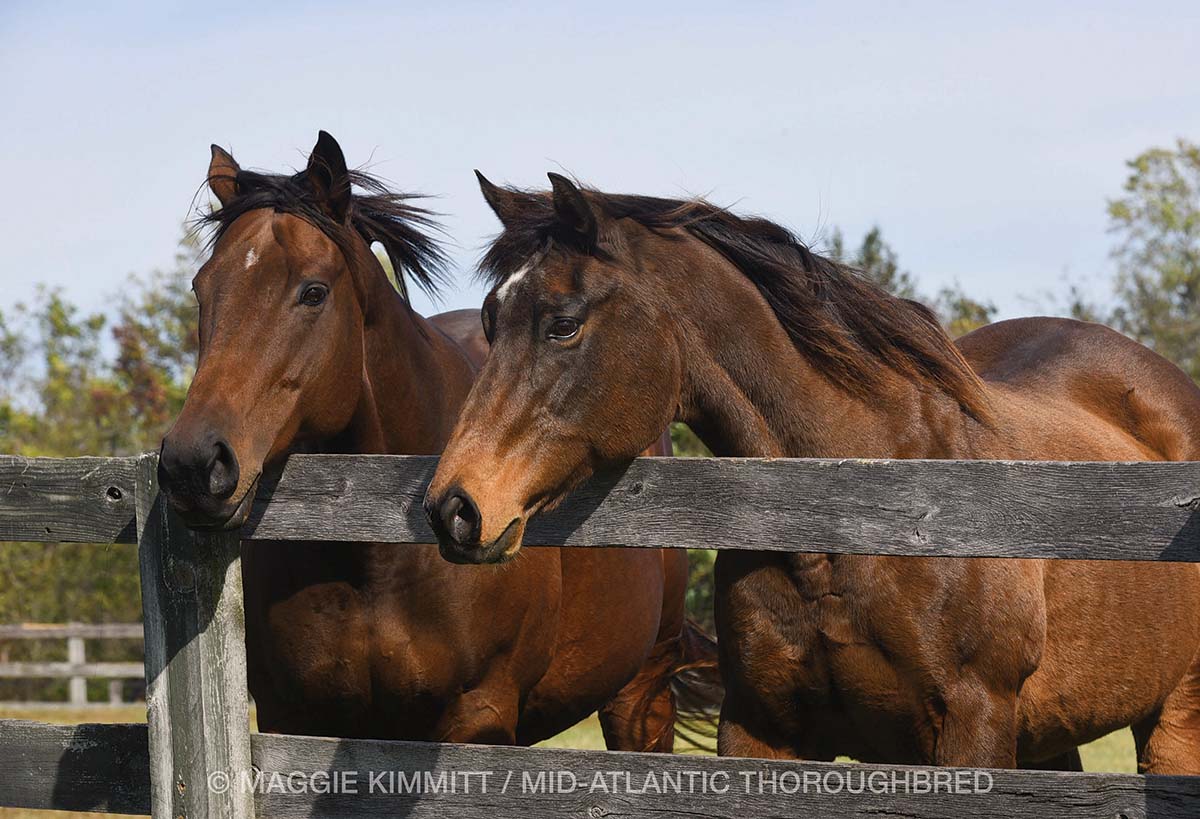 Her name is Victoreen. On paper, she’s completely unassuming. She was foaled in Oklahoma in 1989, sired by Victory Stride, a Maryland-bred son of Northern Dancer who was at that time being bred to Thoroughbred and Quarter Horse mares.

Her dam, the Canadian-bred Nice Dancer mare Cranareen, claimed one stakes win among her four lifetime victories and earned $62,924. Victoreen was herself a winner of four races from 33 career starts –in claiming and allowance ranks – was stakes-placed once and earned $31,257 in three seasons on the racetrack.

But the real story of Victoreen is that of enduring friendship among three people she brought together, and a long-kept promise made by two of them to the one no longer here.

Wendy Moon met George Margetson while she was employed by Bob Levy as manager of his Muirfield Farm in Chesapeake City, Md. Known as “Cotton,” Margetson was a van driver, hauling horses throughout the Mid-Atlantic region. A native of Arkansas, he held a trainer’s license and periodically had a horse or two of his own. Levy, owner of 1987 Belmont Stakes and Haskell Invitational winner Bet Twice, had known Margetson for years, and he became a fixture around Muirfield.

“Cotton was just a salt-of-the-earth great guy and a good friend. I could be in the worst funk in the world and call Cotton and he’d have me rolling on the floor,” Moon said.

Margetson claimed Victoreen for $12,500 at Oaklawn Park in March 1992. He brought her east and spent the next 18 months running her at Delaware Park with the occasional foray to Monmouth Park and other tracks in the Mid-Atlantic region.
“Cotton came to me a few years after he had retired Vicky,” said Moon, using the mare’s predictable nickname. “He was looking for a place to put her, and at the time I could keep a horse at the farm and just had to pay vet bills and farrier. He said ‘I’ll give you half of her if you keep her’. . . and I couldn’t say no. It all seemed like a good idea at the time. She was such a cute mare, and very sweet.”

The new partners bred their mare to Opening Verse – who stood just down the road at Northview Stallion Station – in 1997. The resulting foal, a colt named Victory Verse, sold at Fasig-Tipton’s fall yearling sale in 1999 for $3,200. He ran 16 times, won once, and earned $14,891.

“She only had two foals,” Moon said. “The colt we sold at Timonium [Victory Verse] was really good looking; really correct. But breeding for the market was tough, and she was not very commercial.” 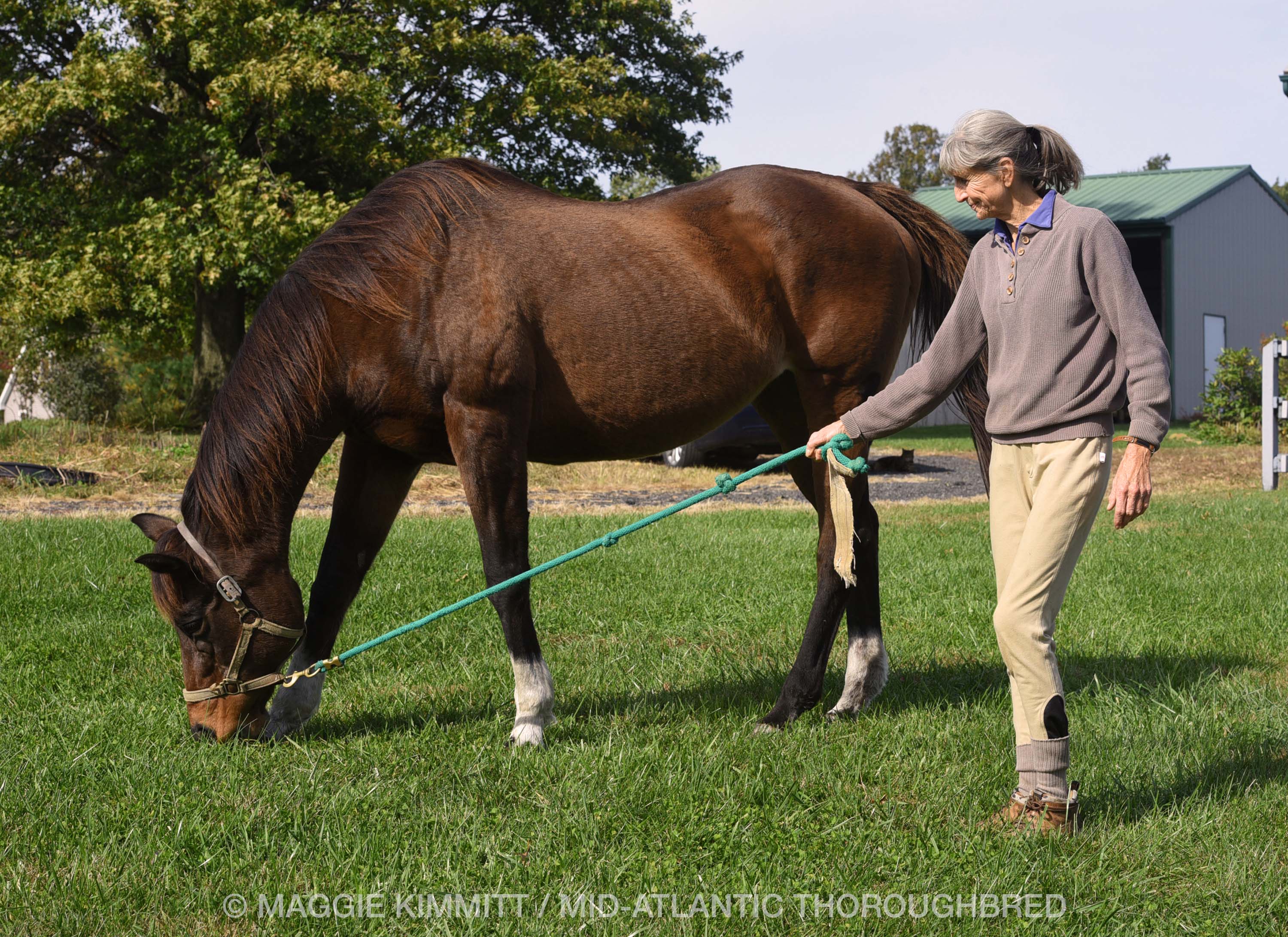 Nonetheless, Moon and Margetson thought enough of Victoreen to keep her. In the meantime, Levy’s stable star Bet Twice had taken up residence at Muirfield. Plagued by chronic breeding problems, Bet Twice found himself bearing the same label as Victoreen – “not commercial.”

“He’d had breeding problems – not fertility issues. He didn’t want to,” Moon said. “They ended up sending him to a specialist in Texas who worked with him to no avail. Then he went back to Florida to Francis Van Langendonck at Summerfield, and they were able to get him a little bit aroused with a cinnamon colored Shetland pony.”

Discussing the issue with Muirfield veterinarian Kim Fincher one day, Moon wondered aloud whether pasture breeding might be the answer for Bet Twice. And she even had the perfect mate in mind – Victoreen.

“With a lot of horses that could make a difference. And what better mare to use than Vicky. She was kind; she was mine, not a client’s. We’ll participate in this experiment. Kim didn’t think it would hurt to try.”

Once Victoreen began to show signs of coming into season, she and Bet Twice were turned out in adjacent paddocks. Boy met girl, and all seemed to be going well. He was docile but clearly interested, and she was receptive. Once the time seemed exactly right, Victoreen joined the stallion in his paddock with Fincher and Moon supervising.

“And then the rodeo started,” Moon deadpanned.

The formerly detached and disinterested Bet Twice viewed the situation as more of an unwelcome intrusion than a romantic interlude, and a very surprised Victoreen was on the run.

“He was chasing her around, and she was like ‘OH my God!’ On about the third lap around, we caught her by the gate and hauled her outta there. And they never tried to breed Bet Twice again. It’s funny in retrospect, but. . .”

When Levy sold Muirfield in 1999, Moon found herself looking for a new career path as well as a new home for Victoreen. She and Margetson had gotten to know breeder Ashton Kelly, who brought her yearlings to Muirfield to be consigned to the sales.

A graduate of Washington College in Chestertown, Md., Kelly had gone to work for Binnie Houghton breaking babies while still an undergraduate.

“After I graduated I went down to Aiken and worked for Jim Maloney. Then I went to Kentucky and started doing the sales, broke yearlings for different people in the fall,” Kelly said. “I went to Chesapeake City and galloped horses for [Allaire duPont] at her farm. In my 30s I started thinking I didn’t really want to gallop anymore.”

Now a real estate agent, Kelly eventually found herself the ideal property in Kent County, Md. Originally 120 acres, she subdivided it into four parcels, keeping a 21-acre tract for herself and selling the rest.

Located a mile from the beach community of Betterton at the mouth of the Sassafras River, Kelly’s home is the perfect setting for three of her primary interests: her horses, kayaking and cycling.

Upon hearing that Moon and Margetson were looking for a place to retire Victoreen, Kelly didn’t hesitate to offer the perfect solution. Margetson delivered Vicky to the farm, where she joined Annie and Nellie, the two Thoroughbred mares who are still her pasturemates today.

Kelly kept all three mares fit and in work.

“I’m from the racetrack,” she said. “I believe they need to be kept going.”

Margetson frequently made the drive to Betterton to visit his mare, usually bringing along feed, hay or whatever he could contribute to help Kelly with her care. He passed away at age 59 in 2010, leaving his cherished Victoreen to Moon.

While Moon is technically still Victoreen’s rightful owner, she gives all credit to Kelly for the 27-year-old mare’s great health and well-being.

Admittedly, Victoreen enjoys status at Kelly’s homestead. She’s usually given run of the place, often allowed to graze on the lawns and between paddocks. She’s blanketed and brought into a roomy box stall on the coldest nights. And it goes without saying that treats are offered to Victoreen first, with Annie and Nellie respectfully waiting their turns.

“I feel like she’s more Ashton’s because she has had her and cared for her for so long,” Moon said. “And if at any time Ashton had not been able to keep her, I’d find some place for her, even today.” 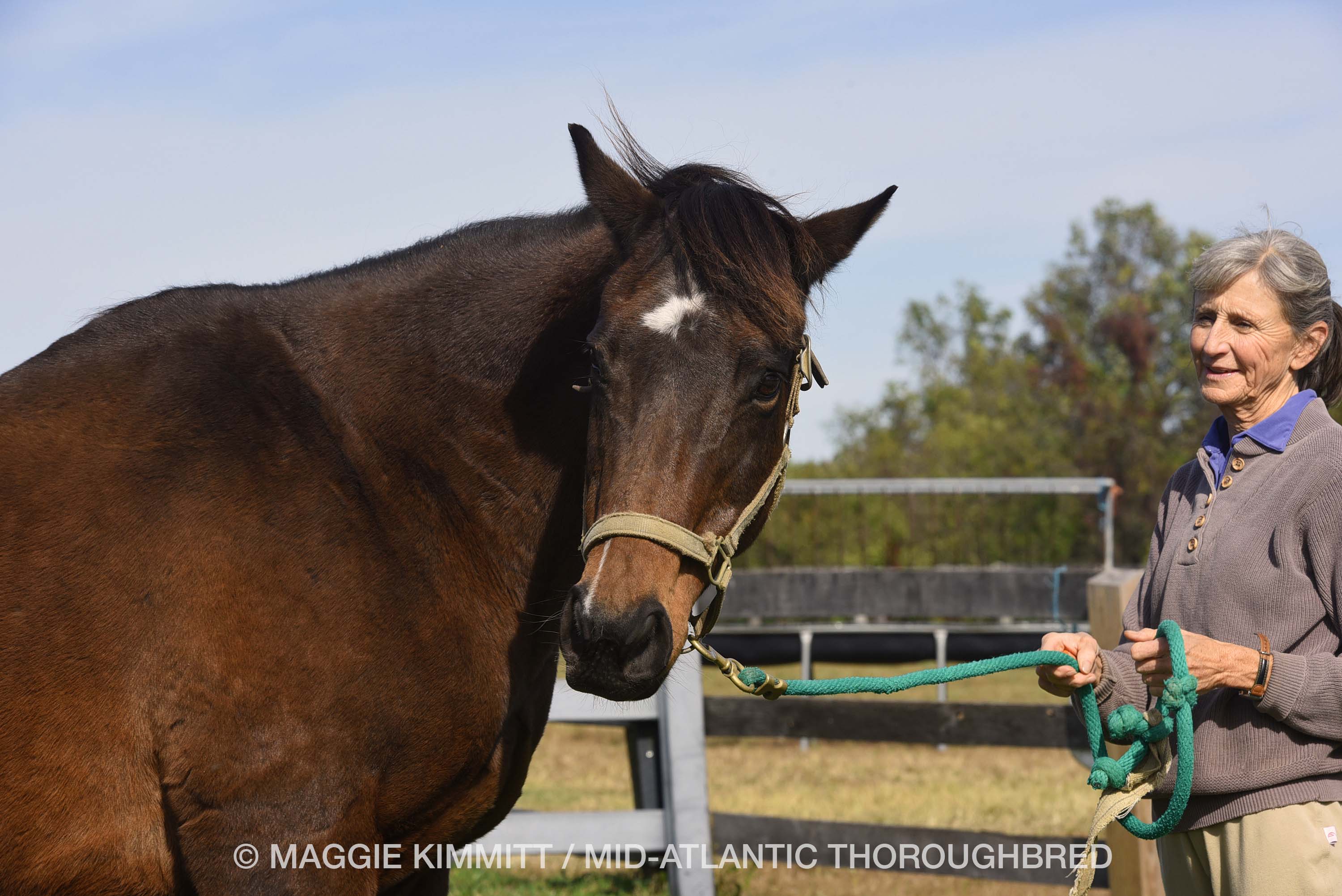