This weekend is Rolex in Kentucky, the country's premier 3-Day Event. May's issue of Mid-Atlantic Thoroughbred features a delightful story on the second career of Bold and Burley, now known as Shiraz--who competed there in previous years.

Shiraz is a world-class event horse and one of the contenders at England’s Badminton Horse Trials this month. Eventing enthusiasts speak of him as a rising star. Bold and Burley was a slow racehorse at Penn National who mustered two wins and about $10,000 from a 14-start career that ended in 2003. Racing fans have never heard of him.

But they’re the same horse. 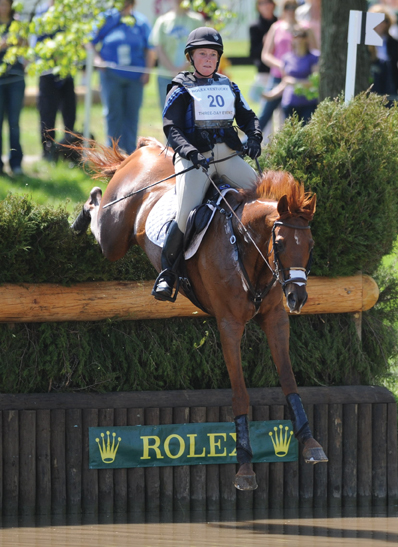 Based with Colleen Rutledge in Mt. Airy, Md., the Florida-bred son of Gallapiat competed at Burghley, another top-level English competition, in 2011, and also placed 12th in last year’s Rolex Kentucky (this country’s only four-star event). Simply put, Shiraz absolutely loves his new job, and especially the foreboding cross-country courses that challenge the very best. He opened 2012 with a win at the intermediate level and a ninth in advanced competition, both in February.

When Rutledge ventures out on to the cross-country courses at these events, she feels Shiraz’s swagger, his glee, as he realizes the task at hand. The skill didn’t come easily, but took four years of training and stepping through the ranks of eventing, which includes the very different disciplines of dressage, cross-country and show jumping. Each takes a unique ability. Shiraz, summoning his best racehorse attitude, thrives at cross-country. Dressage is still a weakness, but he’s getting there.

“He loves cross-country and it’s a feeling of glee (to ride him),” Rutledge said. “The other disciplines, he’s getting it. It’s like doing math problems. He’s a freak of nature when it comes to his jumping. He’s technically sound, very athletic, it’s effortless for him. He’s brought me to the upper tier of this sport.”

All this happened because somebody saw something in Bold and Burley all those years ago at Penn National. They had to look hard. He didn’t start until October of his 3-year-old season in 2001, and showed some promise with an upset maiden special weight win going a mile in his second start. Four consecutive losses sent him to the $5,000 claiming ranks and he won going 6 furlongs at nearly 50-1 for owners Lee Ann Webb and Bill Yeagley and trainer Sam Webb. That would be his last moment of racetrack glory. Seven more losses piled up and he was through in March 2003–a $4,000 claimer in which he broke slowly and never moved beyond ninth place while losing by about 15 lengths.

Sam Webb liked something about the horse though, and convinced Brooks Von­Nieda to take a chance on Bold and Burley as a show hunter prospect.

VonNieda often shops at Penn National when looking for Thoroughbreds to transfer to second careers. She spent $3,500 on this one, renamed him Shiraz because of his deep chestnut color–and went to work. She remembered a beautiful mover, and taught him well enough to sell him on as a show hunter. That career eventually fizzled and he next moved to eventing as a mount for a young rider. A friend of Rutledge’s saw him first and talked of “an amazing horse.” It would be another two years before Rutledge saw Shiraz, however. He was for sale again.

Pregnant with her third child, Rutledge could only watch. She saw a horse who did not listen well and was heavy on his forehand–but boy could he jump.

“He could step over a 4-foot square oxer,” Rutledge said. “He was so athletic with his front end, his knees, extravagant. He had the entire package, even though he was a bit nutty at times. He had no direction when I first got him. It was all about what he wanted to do, not about listening to the rider.”

Rutledge and Shiraz competed together for the first time in 2008, and by the end of the year had placed second at the intermediate level. By 2009, he was going advanced. By 2010, he was a regular at the top level. Last year, he blossomed into a star and earned Rutledge the Maryland Horse Industry Board’s second Touch of Class Award.

Not bad for a horse who took a circuitous route to find his calling. He was a slow racehorse and not a great show hunting prospect. But as an eventer, he found his skill set and finally lived up to his name–cross-country is for the truly bold.

For more on Shiraz and the people who made him who he is today, see www.colleenrutledgeeventing.com and www.straightupstables.com.