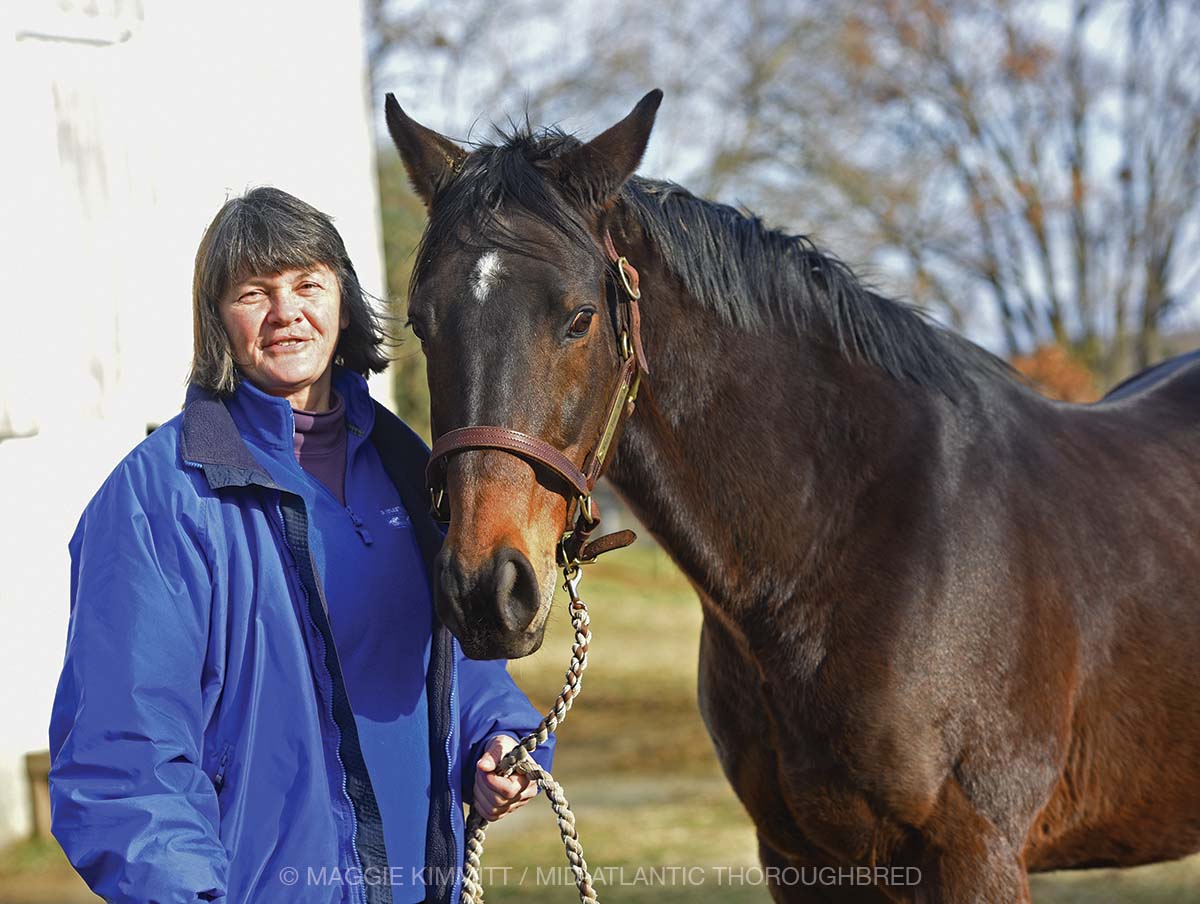 “I adore this horse and he personally vali­dates everything we do.”

Bev Strauss, co-founder and president of MidAtlantic Horse Rescue, has spearheaded the redemption of more than 1,000 slaughter-bound ex-racehorses since the nonprofit was formed in 2002. But her lofty praise – and self-professed “giddiness” – is reserved for just one: What’s Your Wish.

Strauss vividly remembers the day in 2007 when Susan Kearney, one of MAHR’s “Friends of Twilight,” sent her a cell phone photo and the tattoo number of a Thoroughbred gelding she spotted at the New Holland livestock auction in Pennsylvania.

“We weren’t there that day for some reason,” Strauss said. “Susan was looking for a particular horse who had been running at Parx. She saw a dark bay horse tied up by the cows who was really creating a fuss. He was totally freaking out, so they moved him. Susan’s not really a horse person but decided to see if she could read his tattoo. She got it, which was amazing, and she called me.”

At that time – early 2007 – online searches were not available and it was necessary to contact The Jockey Club directly to obtain information from its database. Strauss found out that What’s Your Wish “was a pretty good horse.”

Bred in Pennsylvania by Hidden Lane Farms, What’s Your Wish began his career full of hope and luster as a 2-year-old in 2000. Campaigned by his breeder, the son of Metfield out of the Raised Socially mare Debutante’s Wish won convincingly at first asking in a maiden special weight at Philadelphia Park. From there, trainer Guadalupe Preciado vaulted the horse into stakes company and he placed third in Philadelphia Park’s Valley Forge Stakes. Fifteen days later he finished a dismal ninth in Belmont Park’s Pilgrim Stakes-G3 behind winner Volponi, who would go on to score in the 2002 Breeders’ Cup Classic-G1.

What’s Your Wish rebounded with a victory in the Pennsylvania Futurity and then wrapped up his freshman season with another win in an allowance at Laurel Park. It was enough to earn him the title of Pennsylvania’s champion 2-year-old male for the year.

With his connections thinking Triple Crown trail in 2001, What’s Your Wish faced mostly stakes company. Making only five starts, he was never worse than fifth. He finished third in the Whirlaway at Aqueduct, the Woodlawn at Pimlico, and Monmouth Park’s Jersey Derby-G3.

He had a busy season as a 4-year-old in 2002, didn’t run at all in 2003, and came back at age 6 in 2004. Hidden Lane Farms kept him with Preciado throughout his career until he was lost in a claim at Philadelphia Park in April 2005 to owner/trainer Rafael Castro.

After a steady decline through the claiming ranks, trainer Bryan George took What’s Your Wish for $4,000 at Philadelphia Park in July 2006. That year was by far the 8-year-old gelding’s toughest; he started 18 times, winning just twice and earning $26,799.

He never won a race for George, who retired him that December after he finished sixth at Penn National while running for a $2,500 tag. The career that had begun with such promise ended with a line of 63-11-9-7 and $249,630 earned.

Strauss was able to piece together his story from there.

“Bryan George sold Wish for $500 to a woman in Pottstown, Pa., to be a dressage horse for her daughter. She decided the horse wasn’t at all what she wanted. So she called a dealer out there who goes to New Holland a lot and asked him if he wanted to buy the horse. He said no, he wasn’t dealing in Thoroughbreds and suggested that the woman just try to sell him privately. Apparently, she had him sold and he wouldn’t load on the trailer, so she called the dealer back and said ‘Just come pick him up.’ He was a throwaway. I can’t believe that he ever ended up where he did.”

Once Strauss had figured out who What’s Your Wish was, she called the sale barn in search of the dealer who had taken him to New Holland. Reaching his wife instead, she was told that he had shipped that particular load of horses directly to a slaughter plant in Canada.

A few days later, the dealer called Strauss and informed her that his wife had been mistaken; What’s Your Wish was actually still on his lot.

“He kept him at his place for the week and then brought him back down to New Holland the next Monday,” she said.

For Strauss, the rapport with the horse was instant and profound from that first meeting.

“We went and picked him up, and I remember standing there holding his head and just feeling this connection with him. This horse is SO cool. We didn’t have room at the time [at the MAHR farm in Chesapeake City, Md.] and of course none of his connections wanted him. So I called my friend who was running Akindale Thoroughbred Rescue in Pawling, N.Y., and she said they would take him.”

Fast forward to spring, 2008. Strauss was looking for a pasture mate and babysitter for a young Thoroughbred filly she had on her farm in Kemblesville, Pa. She had never stopped thinking about What’s Your Wish, so she called Akindale to see how he was. He was sound and a perfect gentleman, she was told. And that was all she needed to hear.

“I remember getting home on the night he arrived thinking ‘What have I done? I’ve never even sat on this horse, he has huge ankles.’ But I walked into my barn and I immediately felt that connection again. And I just kept thinking God, he is so cool and the most beautiful horse I had ever seen. He gave me goosebumps.”

He wasn’t an easy ride, but Strauss figured him out and learned how to accommodate his quirks and idiosyncrasies. She foxhunted him – “he figured that out right away” – and evented him successfully through novice level.

“We just had so much fun. He was sort of ready to move up to training level, but his flatwork wasn’t there and he was getting a little older. So I ended up with another young horse and just kept him here as a buddy. He deserves to live out his days like this, and that’s what he’ll do.”

Ten years after their initial encounter, Strauss unashamedly fawns over What’s Your Wish like a 14-year-old girl.

“I’ve had horses my whole life, but this one just makes me giddy; he makes me smile. He’s my boy.”