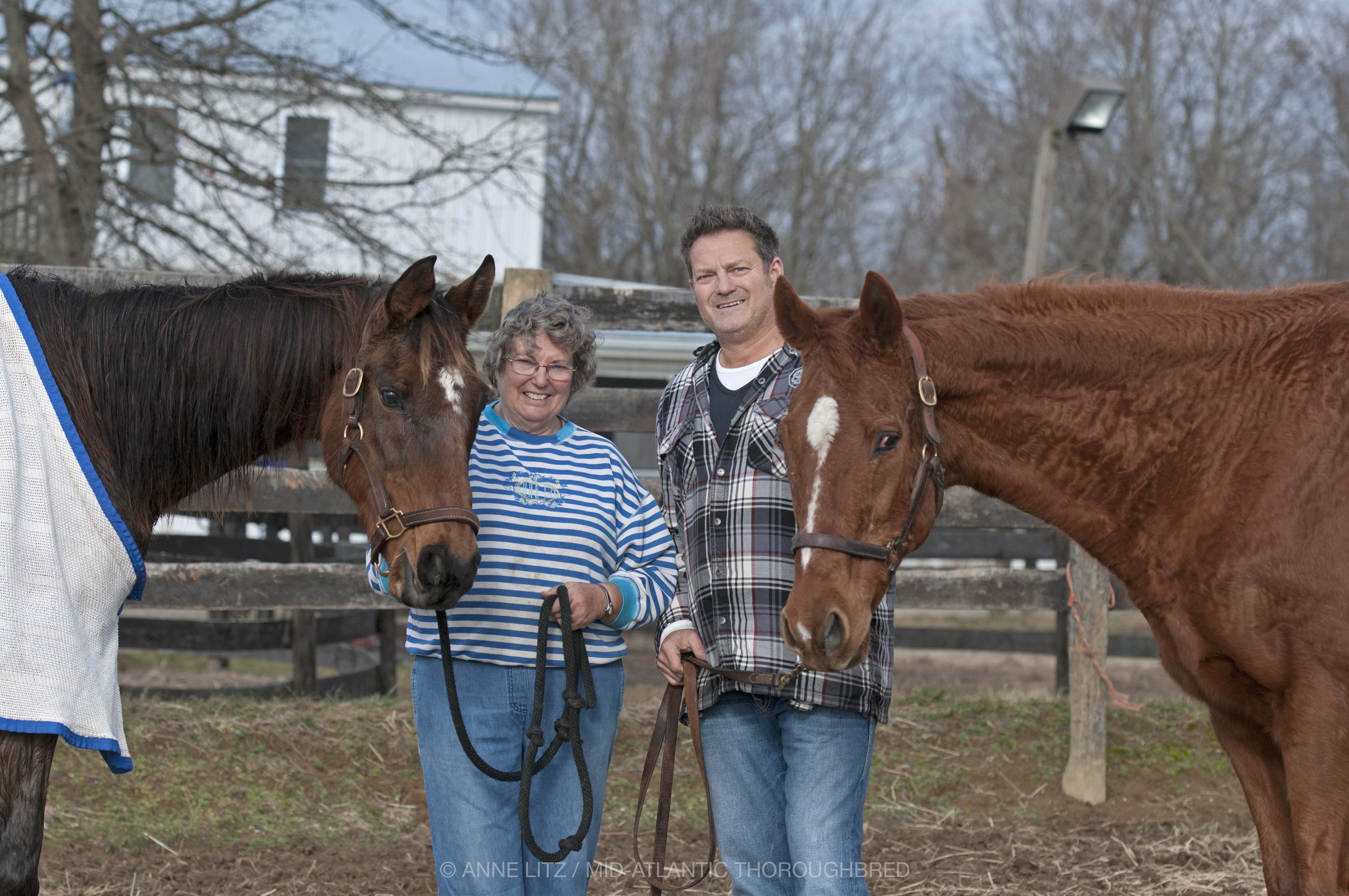 When trainer Annette Eubanks told her son Dan that she was bringing a former trainee home to her farm for retirement, he wasn’t surprised. She’d done it before. But when she mentioned the horse’s name, he couldn’t imagine what would possess his mother to even entertain the idea.

“My mom has the biggest heart in the world,” Eubanks said. “But I said to her ‘What are you bringing this horse home for? His nickname was Jaws!’ ”

Deep down, though, Eubanks knew why. Rugged and durable, Learned Jake had been a memorable character not just for his churlish demeanor but also for a career that spanned nine seasons on the racetrack.

Bred in Virginia by Mr. and Mrs. David Abse, Learned Jake was by the Northern Dancer stallion Pas Seul out of the Jay Fox mare Jayambic. Learned Jake’s career began as a 3-year-old in 1987 for Richard Vermillion and trainer King Leatherbury. The horse earned upper-case black type for those connections, who had him until 1992. A fixture at Laurel and Pimlico, he frequently faced off against local warriors Due North, Frugal Doc and Valley Crossing. Learned Jake won the Grade 3 Riggs and Laurel Turf Cup Handicaps, as well as the Native Dancer and Congressional Handicaps. He eventually ran for Leatherbury’s The Jim Stable, before being picked up in June 1992 by Annette Eubanks for owner Dewey Davis.

Eubanks ran the veteran in claiming races in Maryland and Delaware for two-and-a-half years. Dirt or turf at 7 furlongs to 11⁄8 miles, Learned Jake could pick up a check. Turned out he could also pick up a person.

“His groom, Monica MacKinnon, worked for my mom for many years,” said Eubanks. “She really became good friends with him; Jake was her number one horse. She was raking the shedrow one day when he bit her on the shoulder and dragged her through his stall webbing. He bit her on the ear once too. But the nickname Jaws came from one of Leatherbury’s grooms; he literally bit the cheek off the man. He was a mean S.O.B. at the track.” 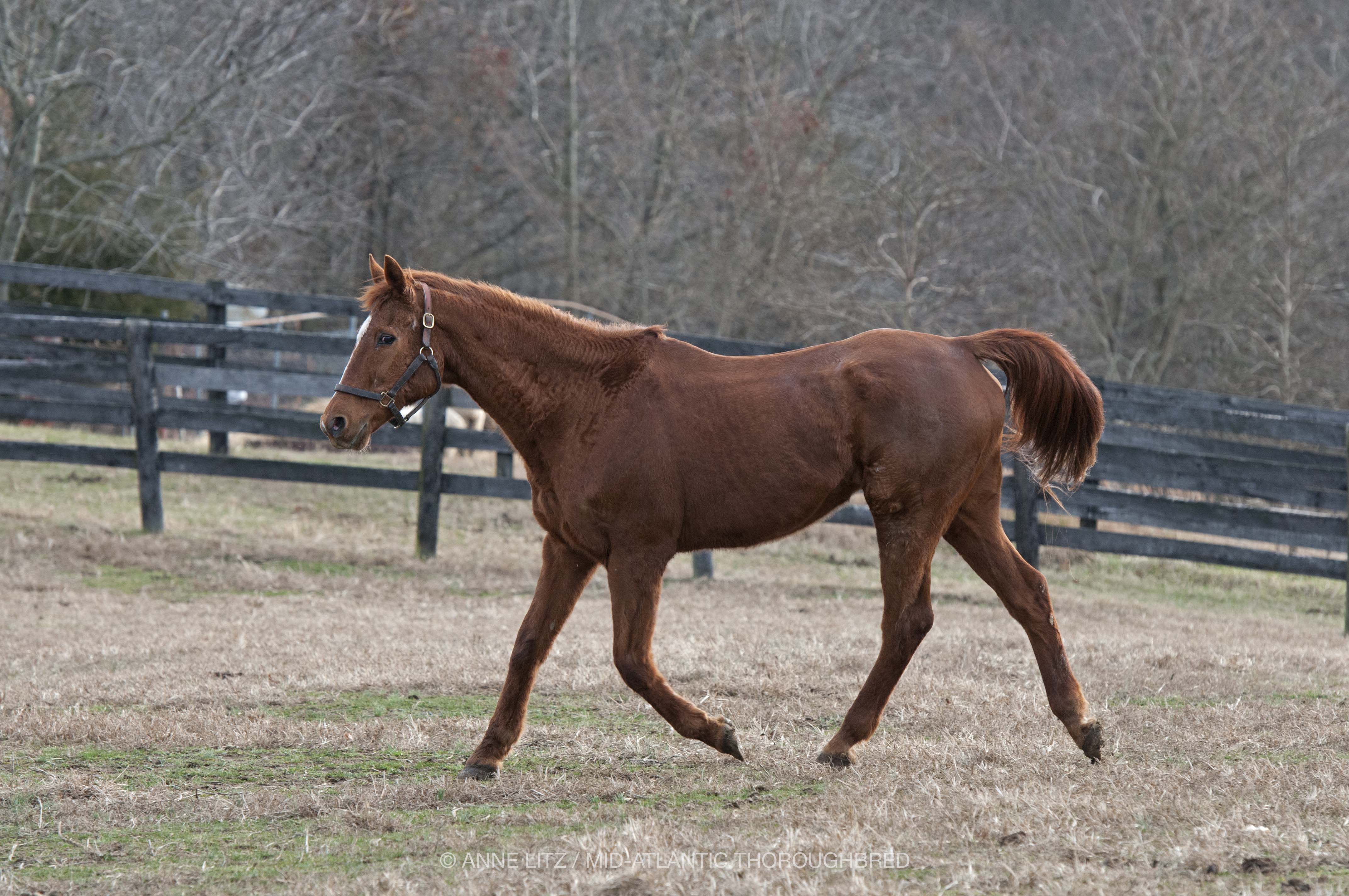 Assault and battery aside, MacKinnon shed tears when Learned Jake was claimed from the Eubanks team by David Geist on October 30, 1994. Geist took the 10-year-old to Penn National where he ran for the next 10 months (with occasional forays to Mountaineer Park) for Silver Hawk Stable. Learned Jake won three races for his new connections through July 1995, but finished last and pulled his suspensories while running for a $3,500 tag Aug. 16.

Shortly thereafter, Geist contacted Annette Eubanks to let her know the 11-year-old was finished and facing a questionable future. Eubanks stepped up, and Learned Jake headed to retirement on her farm, then in Frederick, Md.

Dan Eubanks was usually pressed into service whenever his mother brought a horse home to be re-purposed.

“So I thought, ‘Let me give this old guy a try.’ He was a chestnut and I love chestnuts. He’s just beautiful. He taught me a lot about horses because he was definitely a true athlete. I’d get on him and for the first solid year, he would go for a good gallop with me hanging on as tight as I could until he tired out and I could actually ride him. As time went on I started jumping him and he was just a natural.”

Eubanks recalled one particular afternoon that left a lasting impression. After putting in a claim for a horse who broke down during the race, he took Learned Jake on a trail ride to de-stress. After a time, Eubanks realized he was lost in the woods with no idea how to find his way home.

“I tried to take him one way and he wouldn’t go, he just stood. I finally gave up, let go of the reins and took my feet out of the stirrups and he walked me back to the barn. I’d never seen anything like it.” 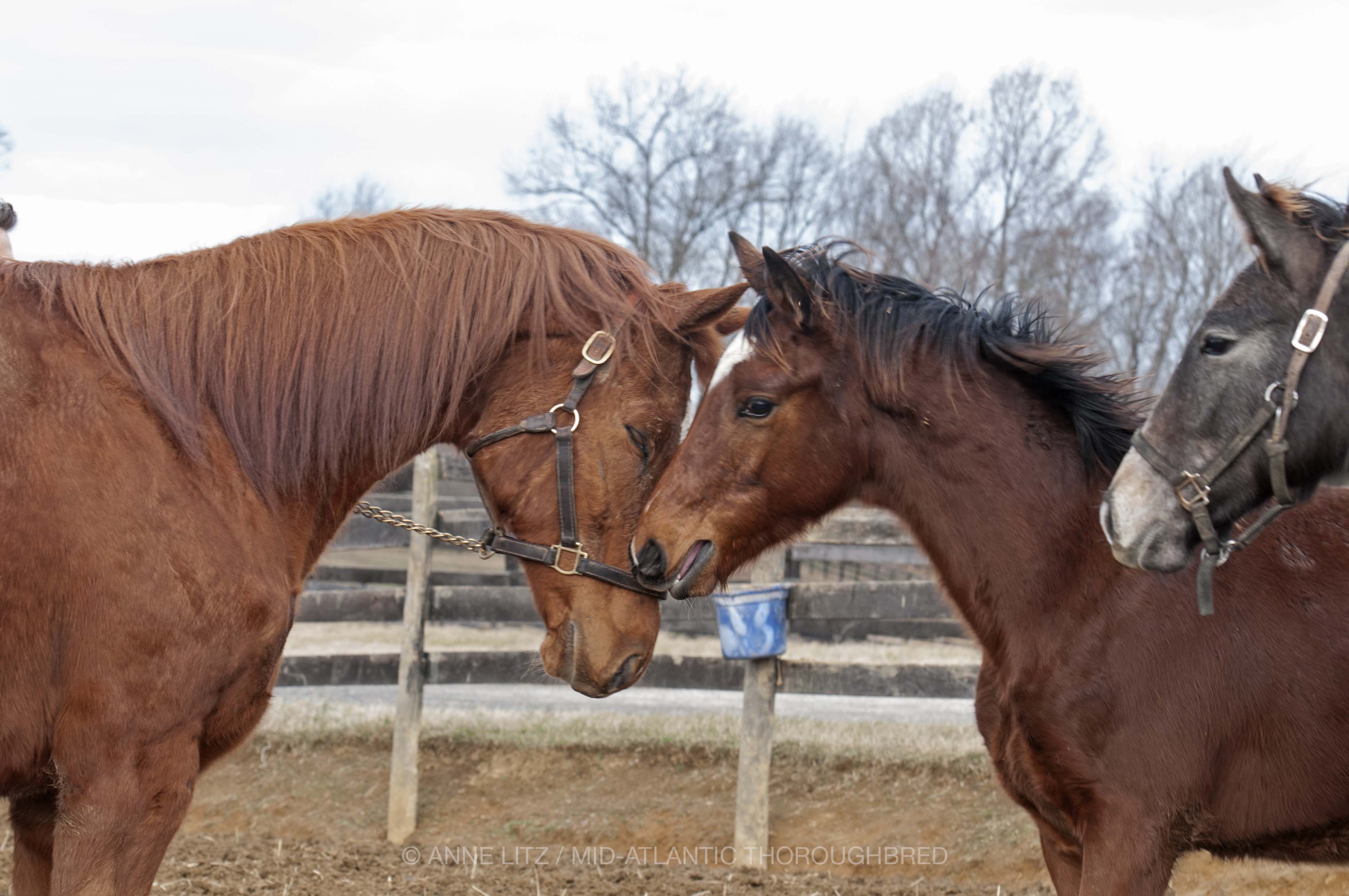 The cantankerous attitude from the racetrack mellowed a bit with age and leisure, but Learned Jake never let Eubanks get cocky. The ear-pinning and gnashing of teeth continued whenever he was tacked, although clearly it became just a game.

“He was just letting you know that he was who he was. But he was also the horse I could put people’s kids on. I could lead him around the ring with them on him. He was the one who would look after orphan foals that we’ve had over the years. He would take care of them.”

One cheeky habit, however, managed to get the best of Eubanks more often than not. Always one to enjoy blowing off steam with a good strong gallop, Learned Jake would occasionally wait until he felt Eubanks relax after pulling up and then wheel and drop him.

“He’d never run off though. He’d just stand there looking back at me until I got up and got back on.”

Eubanks continued to ride the gelding until he was 28. After noticing that the horse would be foot-sore for a few days after one of their outings, he decided it was time for Learned Jake to enjoy being truly pensioned.

Learned Jake turned 33 in January and lives on Annette Eubanks’ farm in Lothian, Md., and spends his time with 31-year-old retired broodmare Quick Shift. The daughter of Double Zeus won 16 of 81 starts and is responsible for a dynasty of sorts for Annette Eubanks’ Crystal Park Stables. Her first foal, Crystal Ice, herself a winner of three of 65 starts, produced the filly Little Ice Patch, who earned $110,079. Bred to Midshipman in 2012, Little Ice Patch produced Ice On the Severn, a maiden winner at Laurel in December. Now Quick Shift fills a valuable role in the life of reformed tough guy Learned Jake.

“After all this time and all that attitude,” Dan Eubanks laughed, “he ends up henpecked and picked on by an old lady every day.” 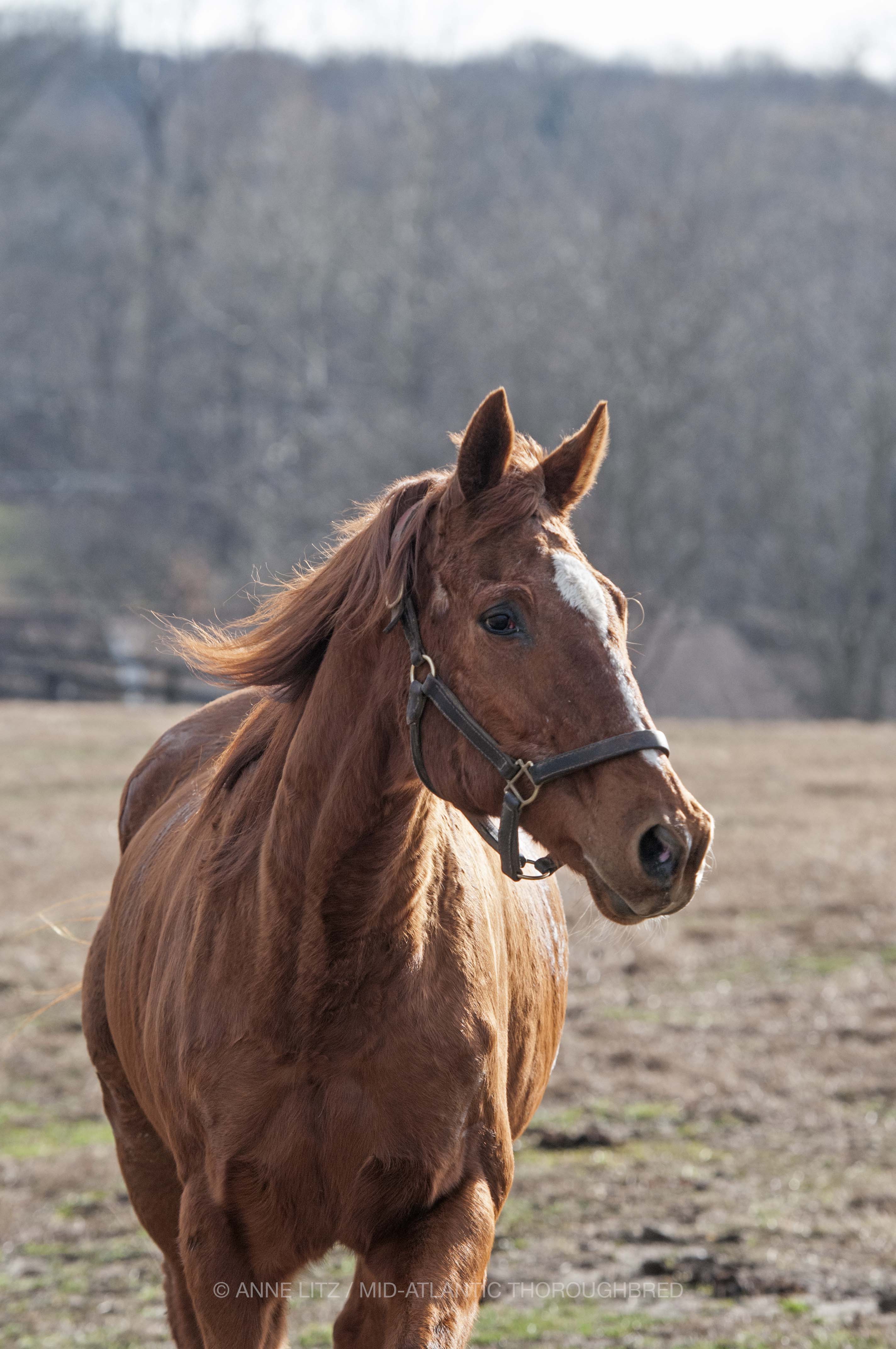