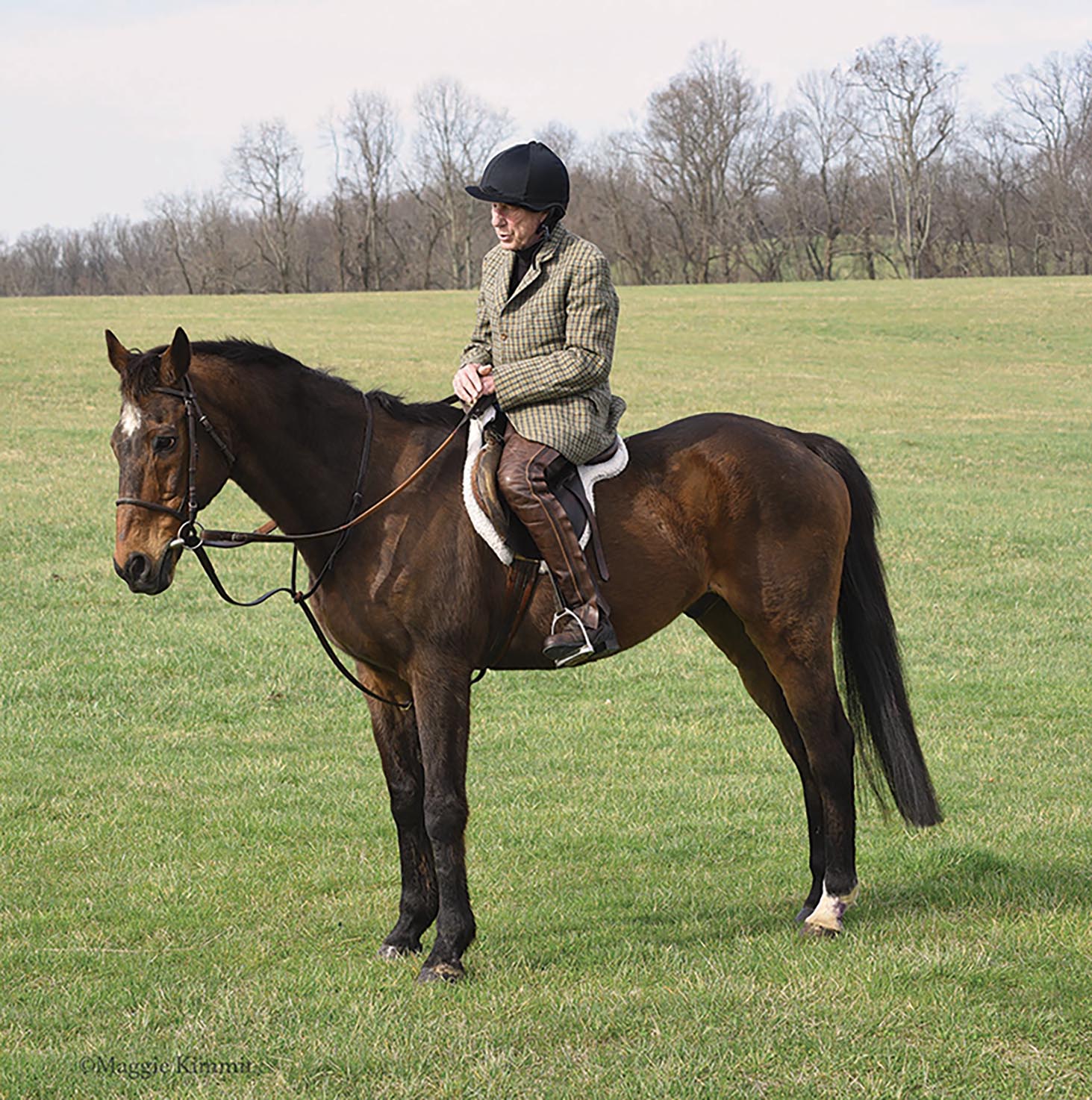 Herb Hogg was looking for a horse. Thirteen years ago, the lifelong foxhunter had taken a bit of a beating from a “rogue-y” mount who’d left him with a punctured lung and broken ribs. A CPA by profession, Hogg got a suggestion from a client – Hall of Fame trainer Janet Elliot – who mentioned she had a prospect on her Pennsylvania farm.

“Janet never told me anything about him,” he said. “She just said to come try him and see what I thought. So we went out to one of her fields and jogged around, and the next thing I knew we were jumping fences. And this horse is a reallllly good jumper.”

“I told him I got him from Janet,” Hogg said. “And he kept saying ‘Derby horse! Derby horse!’ ”

What Hewitt knew – and Hogg quickly discovered – was that Paulrus had finished seventh in the 1991 Kentucky Derby. The field included Hansel, Fly So Free, Best Pal, Corporate Report, Sea Cadet and Strike the Gold, who won the classic that day for Nick Zito and Chris Antley.

Bred in Indiana by Fortune Marital Trust, Paulrus was the 1988 foal of the multiple graded stakes-placed One for All mare Fia. Sired by Golden Act, Paulrus was sold at the 1989 Keeneland September Yearling Sale; Hall of Fame trainer Jack Van Berg signed the $6,200 ticket.

The bay colt began his career on the Kentucky circuit, running at Ellis Park, Turfway Park and Churchill Downs. He left Van Berg for Florida and the Shug McGaughey barn at the end of his 2-year-old season in 1990. His third in Calder’s Tropical Park Derby-G3 and a turf allowance win at Gulfstream Park were enough to convince owner Warner L. Jones Jr. of Hermitage Farms that he belonged on the Triple Crown trail. Moved to trainer Steve Penrod’s barn in April, Paulrus finished seventh in Keeneland’s Transylvania Stakes. Thirteen days before the Kentucky Derby, Paulrus ran away with a Dueling Grounds allowance going 11⁄2 miles, only to be disqualified and placed second.

On to the Derby they went. Sent off at 16-1 in a field of 16, Paulrus finished seventh (three spots ahead of future Preakness/Belmont Stakes winner Hansel and just 61⁄2 lengths behind the winner).

A 15-month hiatus followed his Derby bid, and Jones returned Paulrus to the races in July 1992 at Saratoga with trainer Bill Mott. The horse managed a win in a claiming race during that meet, and then the connections determined that Paulrus wanted to run long on the turf. Twelve furlongs on the grass became his forte, and he began reeling off wins including three in a row early in the 1993 campaign.

Two months after winning on the turf at Keeneland for Mott in April, Paulrus made his hurdle debut at Laurel Park for Elliot and owner Melinda Bass. He won, but was disqualified for interference and placed second. A suspensory issue limited him to one start, a flat win at the Atlanta steeplechase meet, in April 1994, but he emerged in 1995 to win a flat prep at Stoneybrook in April and break his hurdle maiden at Foxfield later that month. After pulling up in a novice stakes at the Iroquois, Bass’ hometown meet, Paulrus rebounded to win the Miles Valentine novice hurdle stakes at Fair Hill. The win would prove to be his final start, however, as the injuries returned and he was retired.

Elliot, as she often does, thought enough of Paulrus to keep him at her farm after his retirement. He had been loaned out as a foxhunter to other clients before finding a permanent home with Hogg in 2004.

“I really hate to give my horses away,” Elliot said, “so he was here in my field for years.”

And, perhaps most remarkably, Hogg still hunts the 29-year-old with the Fair Hill Hounds in Maryland.

“This is Patsy duPont’s old hunt,” Hogg said. “She always had the lease for Fair Hill. Upon her death, her will stated that her horses and hounds had to be retired. So about four years ago some of the members decided to recreate the hunt and go on with it with hounds from nearby hunts – Andrews Bridge, Cochran. There’s no jumping involved. We are very informal, but we meet three times a week during the season.”

Prior to joining the Fair Hill pack, Hogg served as field master for the Cochran Hunt for eight years. Paulrus was his mount. Hogg had actually retired the horse last fall, but reversed that decision after a plea from his wife Diane one day.

“You need to take him sometimes because he needs a purpose in life and a job,” she told her husband.

“She said he would just stand there and mope all day,” Hogg said. “I’ve only had him out eight or 10 times this year but I do think that’s probably true and I think he’s much happier… even now at 29.”

A lot of old guys have quirks, and Paulrus is no exception. Hogg describes him as “lovely but a bit of a spook.” A stick on the ground could be a snake; a groundhog hole a bottomless abyss. Although never malicious in his reactions, Paulrus is still leery of anything remotely suspicious.

“I was out hunting one day and he spied a groundhog hole and next thing I know he was about 15 feet to the right of where he’d been. My leg was clean up over his back, but I stayed on. At that point, this had happened about four or five times, somebody behind me said ‘I can’t believe you just stayed on this horse. That was really good riding.’ And I finally decided that he is a nice enough horse that when he feels you get loose, he moves back under you, which is kind of an interesting little twist to him.”

Elliot shared another of Paulrus’ little foibles with Hogg, relaying that he was the only horse she ever trained for hurdles who would not go near a jump before a race.

Pausing before a Monday morning outing, Hogg pulled a treasure out of his pocket – a folded-up program from the 1991 Derby. Paulrus looked over his shoulder has Hogg pointed out the accomplishments of that year’s field. “And that’s him,” he said, pointing to number 15 in the program. “There’s Paulrus.”

Returning it to his jacket, he led his partner over toward the trailer.

Paulrus stood quietly, reins on his neck, until Hogg was squarely aboard. And then off they went – two country gentlemen enjoying a good day’s hunt.