Goodie, Frisky and Mickey D. One is a now-white Welsh Cob type “somewhere between 30 and 40 years old.” That’s Goodie. Frisky, the smallest one, is a sleek black Lear jet who regularly devastates fields on the local pony racing circuit. And the third, a tall bay, is a living legend.

Mickey D, you see, is McDynamo. And all three are irreplaceable family members at trainer Sanna Neilson’s 25-acre homestead in Cochranville, Pa.

“He likes everything the same,” groom and caretaker Karen Andress said of the three-time Eclipse Award-winning steeplechaser. “He likes his routine. In the mornings all I have to do is whistle and he’ll come running around. I don’t have to go out here and holler and carry on.”

Everything has been the same for McDynamo since his retirement in 2007. Andress has worked there for Neilson’s family since 1984. The property is bordered by farms owned by Neilson’s half-brother, Stewart Strawbridge, and his father George in an area widely protected by land preservation.

“Most of these places have been owned by the same families for years,” Andress added, pointing to a line of evergreens outside Neilson’s barn. “When I started to work here, these trees were small!”

McDynamo has been a defining force in Neilson’s life for nearly all of his 20 years. Owner Michael Moran purchased the son of Dynaformer out of the Monteverdi (Ire) mare Rondonia as a yearling for $82,000 in 1998. Bred in Kentucky by Richard Fox, Nathan Fox and Richard Kaster, the future Hall of Famer was consigned to the Keeneland September sale by Mr. and Mrs. Bill Wofford.

Moran trained the gelding himself, breaking his maiden as a 3-year-old in his second start at Pimlico in a 11⁄2-mile turf route.

“He was a solid enough flat horse,” Neilson said, “but he was very claustrophobic. He popped out of the gate, went backwards, got loose at Delaware Park and ran around. On the day of his last flat race at Saratoga, they had to stand him all morning. Michael had him up there with [former NYRA chief starter] Bobby Duncan, but it was a real challenge. They had a heck of a time.” 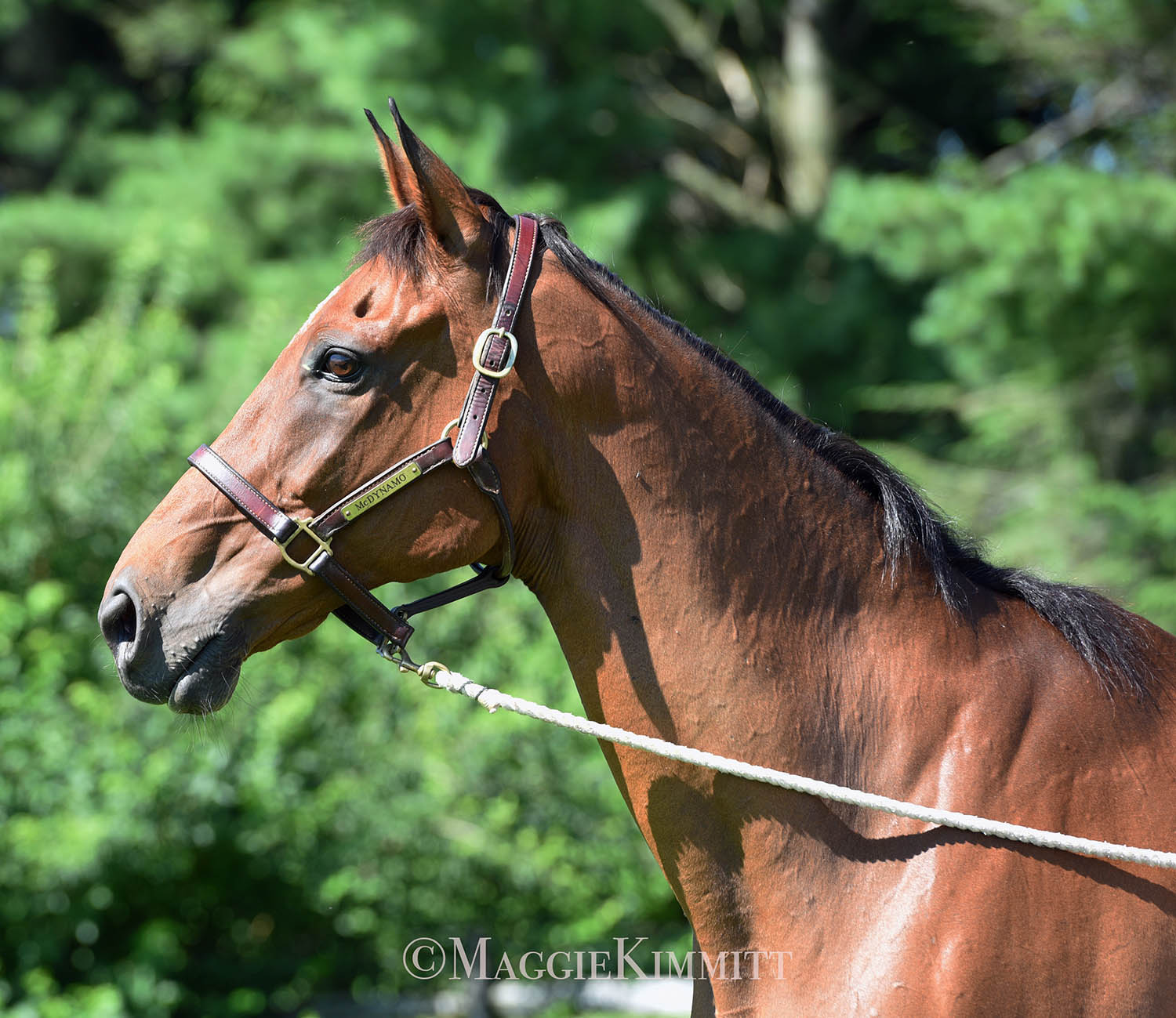 After nine starts – and two wins – on the flat, Moran sent McDynamo to Neilson for a career change.

“I’d had him a few short times when the Morans would go on vacation; he’d come over here to me and we’d school him. At first I was kinda like, ‘Well I don’t know about this guy.’ He was this big, nervous, gangly 3-year-old. Beautiful mover, but definitely a little bit of a deer in the headlights.”

He made his debut over jumps for her on Oct. 20, 2001, at Far Hills, and his first start was a winning effort. It began a dominance of the New Jersey course that may never be replicated.

“I’ll never forget his last work before I ran him at Far Hills,” said Neilson. “I’d only had him for about six weeks. We’d work him up our hills here, and he finally switched off. I thought ‘OK, if you can do that, you might be something.’ ”

He did . . . and he was. Once McDynamo had quickly and authoritatively established himself as a phenom, Neilson only brought him out for major races. He ripped through several of jump racing’s marquee events: the Hard Scuffle Hurdle-G1 at Churchill Downs, Far Hills’ Foxbrook Supreme-G2, Callaway’s AFLAC U.S. Championship Supreme Hurdle-G1, the Royal Chase-G1 at Keeneland, and three renewals of Camden’s Colonial Cup-G1.

His best races came in October at Far Hills – always.

“He won seven years straight at Far Hills. He broke his maiden there at 4, won the novice race as a 5-year-old, and then he won the Breeders’ Cup five years in a row – 2003 through 2007,” Neilson said.

Off and on called the Grand National and the Breeders’ Cup Steeplechase, the big race at Far Hills belonged to the big horse from Pennsylvania. McDynamo was unstoppable in the 25⁄8-mile classic – winning at ages 6 to 10.

In 2005, jump jockey Jody Petty was having a breakout year. He was also working for Neilson in the mornings during a rare dry spell for McDynamo. After an undefeated championship campaign in 2003, he underwent off-season hock surgery and didn’t run for nearly a year. He returned and won at Far Hills in 2004, off the layoff, but lost his next five starts. Heading to Far Hills again, Moran suggested Petty be given a shot on McDynamo.

Petty’s first mount on McDynamo was the 2005 Breeders’ Cup Steeplechase. Neilson had no doubt the pair would click. McDynamo loved to run and jump, and she knew Jody loved to let horses just roll on.

“Everybody asked ‘Were you not nervous riding McDynamo at Far Hills in the Breeders’ Cup?’ ” Petty said in July. “And my response was ‘Nervous? I was way too excited to be nervous.’
I mean, that was his place. He ran there seven years in a row and won all seven races.”

McDynamo and Petty went to the lead and stayed there, winning by 9 lengths. A month later they reunited at Camden for the Colonial Cup-G1. In a near-carbon copy of their first win, they led the whole route to best nemesis Hirapour (Ire) to clinch Petty’s only jockey championship.

“I think it was the best race I ever rode on him,” Petty said.

The riding title was Petty’s, and so was McDynamo. No other jockey would take the reins for the rest of the horse’s career.

Another Far Hills win and a third Colonial Cup win followed in 2006, when McDynamo won three of four starts. He finished fourth in the 2007 Iroquois-G1 in Nashville and then awaited Far Hills that October for his fifth shot at what was by then re-christened the Grand National Hurdle Stakes-G1. At age 10, he was the oldest horse running that day. And it was classic McDynamo, with Petty letting him sit right off early leader Luongo before sticking his head in front after the 10th fence. The chart poetically states that he “increased his advantage on his own courage” through the final turn and won with Petty wrapping up on him.

“It was incredibly emotional,” Neilson remembered. “I came out onto the track and I was just crying my eyes out. I just couldn’t believe he got another one. By the time he was done running, he had such a following. I felt like even the people we were competing against were fans. There was such a high level of respect for him.” 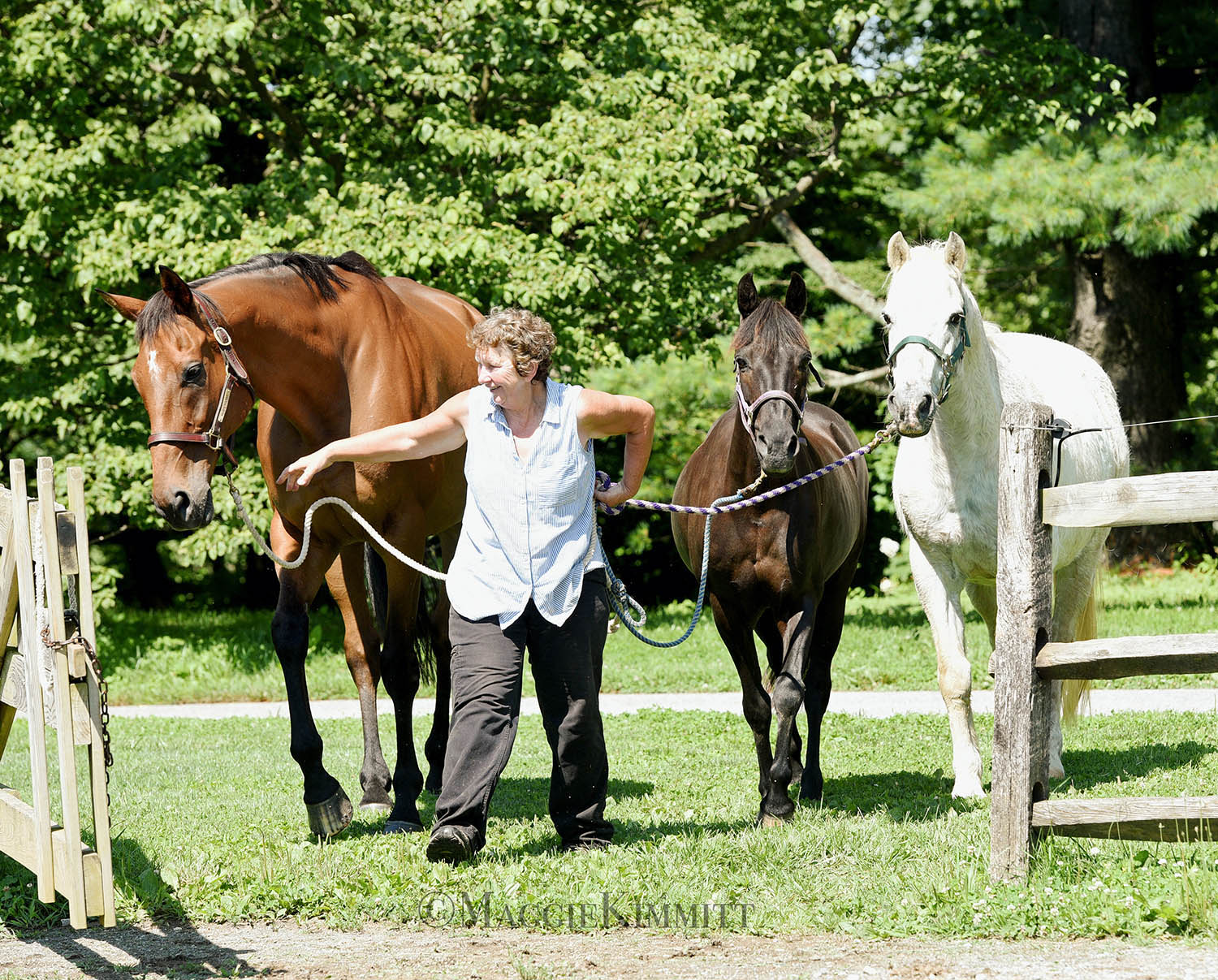 McDynamo made one more start, a dull sixth in the season-ending Colonial Cup, and was retired. He won 15 jump races and earned $1,310,104 in purses – more than any American steeplechaser in history. In 2013, he was inducted into the National Museum of Racing’s Hall of Fame.

Petty still feels that Neilson helped the horse keep his edge by foxhunting him between races.

“Before he won his last Breeders’ Cup, Sanna would be out on an old hunter and I’d be out on McDynamo,” Petty said. “We’d never jump big fences, just hop over logs and things. And we would gallop across the field and get to a big 3-railer, and he would stand there and watch everybody jump, and Sanna would get off, open the gate, let us through, get back on, and we would gallop back up to the field again. A complete angel.”

Once retired, the whole squad hunted McDynamo – Moran, Neilson and Petty all enjoying the privilege. Neilson finally pensioned the gelding a few years ago.

“I just thought, you know what, he doesn’t owe us anything. He was feeling his age a little bit. So now he’s just been turned out in front of the house there, which is really neat. They come down at night to get carrots. They’re all interested in the treats.”

Moran and his wife Anne, who live nearby, still visit regularly as did Petty before moving to New Orleans in July.

But Neilson feels like she’s got the best deal.

“I feel so lucky. I look out my windows and there’s McDynamo, who I honestly adore. It’s a great life.” 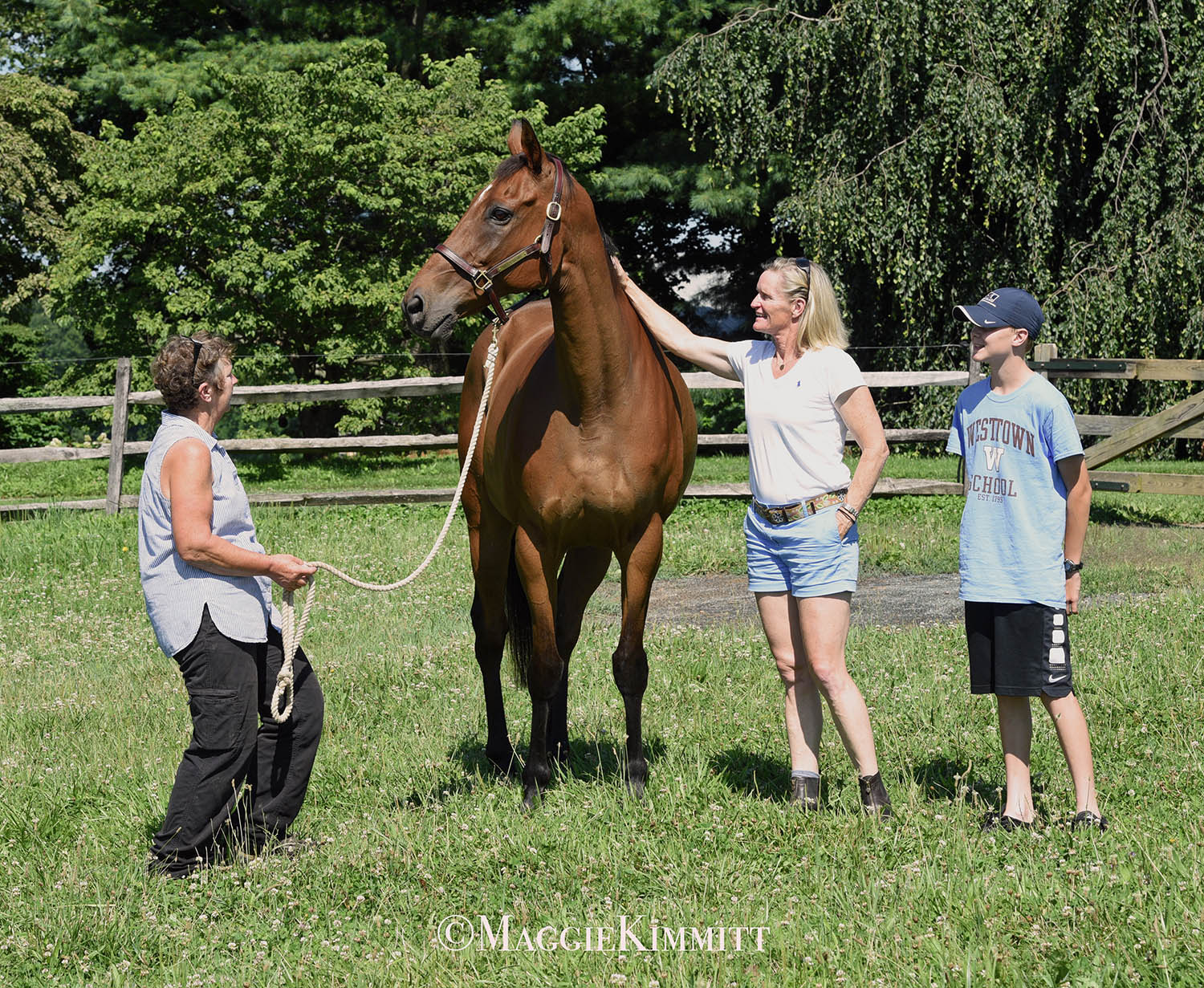